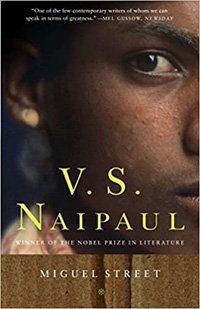 As is the case with Graham Greene, I occasionally pick up one of their many novels, as they’re two of the great global storytellers. The stories in Miguel Street are a collection of linked short stories based on childhood memories in the Port of Spain. The street appears to be based on Luis Street where the author lived with his family in the 1940s. When I was in the Port of Spain five years ago doing some consulting work, I saw some of the slums, which seemed similar to many others I’d observed in Latin America. But it was brought to life when the author tells the stories of the residents in this derelict corner of Trinidad’s capital as if it were a separate world – a Catfish Row – where everyone is very different from one another.

The stories include Popo the carpenter, who neglects his livelihood to build “the thing without a name.” There’s Man-man, who goes from running for public office to staging his own crucifixion, and the dreaded Big Foot, the bully with glass tear ducts. There’s the lovely Mrs. Hereira, in thrall to her monstrous husband. “George and the Pink House” was one of the most memorable, which the author manages to describe with just a few choice comments:

“George’s house also made me feel afraid. It was a broken-down wooden building, painted pink on the outside, and the galvanized-iron roof was brown from rust…”

“I found it hard to believe that George had a wife and a son and a daughter.. and “He beat them all.”

“I began to be terrified of George, particularly when he bought two great Alsatian dogs and tied them to pickets at the foot of the concrete steps.”
“Hat (one of the narrator boy’s friends) was a prophet. Within six months, George was living alone in this pink house. I used to see him then, sitting on the steps, but he never looked at me anymore. He looked old and weary and very sad.

He died soon afterwards. Hat and the boys got some money together and we buried him at Lapeyrouse Cemetery. Elias turned up for the funeral.”
In this tender, funny early novel, V. S. Naipaul writes of the Hindu community to which he belongs, as well as black culture including a number of calypso lyrics, that relate to the themes of the book. He renders their lives (and the legends their neighbors construct around them) with Dickensian verve and Chekhovian compassion. The author’s stories are characterized by mercurial mood shifts, by turns sweetly melancholy and anarchically funny. It overflows with life on each and every page.

I’ve read and appreciated Naipaul’s non-fiction books, such as Beyond Belief: Islamic Excursions Among the Converted Peoples, as well as his fiction like A House for Mr. Biswas, but it was A Bend in the River that made me a life-long fan. In this book the author reveals the life of one man—an Indian who is uprooted by the bloody times in developing world history who comes to live in an isolated town at the bend of a great river in a newly independent African Nation. Naipaul gives us the most convincing and disturbing vision yet of what happens in a place caught between the dangerously alluring modern world and its own tenacious past and traditions.

This book reminded me in some ways of Heart of Darkness; neither Conrad nor Naipaul name the big river, nor the town at its bend, nor the country or its president, in the case of Naipaul. Yet there are possible identifiers and it would seem that both were writing about the Congo River entering the Congo.

A Bend in the River has been described as a “full-bodied masterpiece,” although Naipaul has been accused of being a “neo-colonialist,” and in this novel, post-colonial Africa is depicted as spiraling into a kind of Hell. He has also been accused of being “infected by an ancestral communal resentment” against blacks.

In 2001, without specifically referring to this novel, the Nobel Literature Prize Committee indicated that it viewed Naipaul as Conrad’s heir as the annalist of the destinies of empires in the moral sense: what they do to human beings. In Heart of Darkness, Joseph Conrad presented a dark picture of the same region at the beginning of European colonization; this type of depiction of Africa is also found recast in Naipaul’s novel.
Naipaul has written more than twenty books and has been the recipient of numerous honors, including the Nobel Prize for Literature in 2001 and a knighthood for services to literature in 1990.
Product details
⦁ Paperback: 224 pages
⦁ Publisher: Vintage; Reprint edition (July 23, 2002)
⦁ Language: English
⦁ ISBN-10: 9780375713873
⦁ ISBN-13: 978-0375713873
⦁ ASIN: 0375713875
⦁ Product Dimensions: 5.2 x 0.6 x 8 inches
⦁ Shipping Weight: 9.1 ounces (⦁ View shipping rates and policies)
⦁ Average Customer Review: ⦁ 4.6 out of 5 stars⦁    ⦁ 72 customer reviews
⦁ Amazon Best Sellers Rank: #99,461 in Books (⦁ See Top 100 in Books)
⦁ #450 in ⦁ Humorous American Literature
⦁ #568 in ⦁ Cultural Heritage Fiction
⦁ #300 in ⦁ Comedic Dramas ⦁ &⦁ Plays