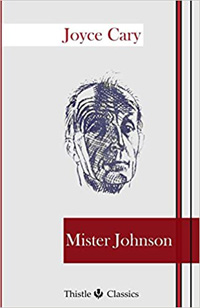 Having worked in West Africa (Sierra Leone) for several years, I looked forward to reading this book, which took place in Nigeria. I also wanted to see how the relationship between an African clerk and his British bosses developed. And I wanted to read what some say is the best novel to be written about Africa, despite its author’s inconspicuous formative years when he barely earned his degree from Oxford in 1912.

Mister Johnson is a warm-hearted, enthusiastic, but incompetent, government clerk on probation at the outpost of Fada, Nigeria who entertains poetic notions of grandeur and glory as he bumbles his way through the trials and tribulations of life.

He is a British Colonial Service official to the very core, and although he may not spell accurately, he was somewhat of a poet. And although he’d often drive his supervisors to distraction, there was something about having him around the place: his ingenuousness is touching, his optimism infectious.

According to V.S. Pritchett, an acclaimed author in his own right, “Johnson has one flash of genius: he sees that he can get hundreds of men to work on Rudbeck’s roads if he turns labor into a game… He is not the childish native, but the childish artist in a community of artists. Though they may reproach him, foresee his downfall and eagerly report all the scandal about him, they know he reflects something of themselves.”

Johnson’s infatuation with a voluptuous village girl, Bamu, reveals the poet in him with illusions of glory. He knows and follows the European tradition in which his wife must wear an English gown whether she likes it or not, and they are obliged as a couple to entertain lavishly on every conceivable occasion, leading to considerable debts with every tradesman in town. But his dreams of transforming her into a civilized lady are doomed, as the self-possessed beauty had other ideas in mind.

As is often the case in West Africa, petty thievery is brought to new levels of perfection that surprised even our protagonist, “Johnson, still amazed and delighted by his unexpected brilliance as a thief, greets Rudbeck (British High Commissioner) with explosive joy. “Oh, good morning, sah. God be with you, sah.”

Johnson’s great flaw, and eventual downfall, would be his illusions about his relationship with his British supervisors. When asked about the “High Commissioner,” Johnson is laughing, “He my frien’—soon as he see me—he smile and say, “Why, is dat you, Mister Johnson? Is you still here? Den he shake my hand and he say, “God bless you, Mister Johnson—I ‘gree for you—I pray for you…”

This illusion would be fatal towards the end of the story when he’s charged with thievery and the murder of a trader, and Rudbeck, who must determine his fate, is depressed at the options. “Johnson, seeing his gloom and depression, exerts himself. “Don’you mind, say, about dis hanging. I don’ care for it lil bit. Why”—he laughs with an air of surprise and discovery— I no fit know nutting about it—he too quick. Only I like you do him yourself, sah. If you not fit to shoot me. I don’t ‘gree for dem sergeant do it, too much. He no frien’. But you my frien’. You my father and my mother. I tink you hang me yourself.”

The Anglo-Irish novelist developed his character based on a clerk who had been a disappointment – “he was stupid and he could not be trusted with the files. He seemed also, a rare thing in an African, unapproachable. This poor clerk was nothing like Johnson, but I remembered him when I drew Johnson. He reminded me, too, of something I had noticed as a general thing, the warm-heartedness of the African; his readiness for friendship on the smallest encouragement.”

One of my favorite authors, William Boyd, who wrote, “A Good Man in Africa” reflects, “A wonderfully evocative portrait of a bygone colonial life… Mr. Johnson, in short, is a great literary creation; he can safely take his place beside any of the characters world literature has presented us with: from Falstaff to Zeno, from Candide to Humbert.” William Boyd

Cary’s book reflects the trials, tribulations and complexities when two cultures and worldviews clash in Africa. Appropriately, the author ends the book with, “But as Johnson does not judge, so I did not want the reader to judge. And as Johnson swims gaily on the surface of life, so I wanted the reader to swim, as all of us swim, with more or less courage and skill, for our lives.”

Several of his articles have been published in Ragazine and WorldView Magazines, Literary Yard, Literary Travelers and Quail BELL, while another appeared in “Crossing Class: The Invisible Wall” anthology published by Wising Up Press. His reviews have been published by Revue Magazine, as well as Peace Corps Worldwide, and he has his own column in the “Arizona Authors Association” newsletter, “The Million Mile Walker Review: What We’re Reading and Why.”