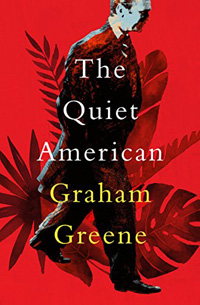 I’ve been meaning to read this book for years as it’s considered one of the best novels about the war in Indo China and even though it was written in 1955 it anticipated many of the flaws in American character and history which would result in what many now consider a catastrophic military debacle. Greene, regarded by many as one of the great writers of the 20th century is also one of my favorite global storytellers with “Journey Without Maps” leading my list. I’d worked in Sierra Leone where he started his journey through Liberia and then followed that with one of his most insightful books, Heart of the Matter which took place in Sierra Leone where he was an intelligence officer in Freetown.

According to Robert Stone’s introduction, the title of his novel was a joke. The key character, an American, is anything but “quiet.” Like all the Americans who appear in its deft, succinct story, Alden Pyle is a prattling fool and the author goes on to prove his unspoken punch line: the only quiet American is a dead American.

The novel was popular in England and achieved considerable recognition after being adapted into films in 1958 and again in 2002 featuring one of my favorite actors, Michael Caine who received a Best Actor nomination. However, after its publication in the United States in 1956, the novel was widely condemned as anti-American. It was criticized by The New Yorker for portraying Americans as murderers, largely based on one scene in which a bomb explodes in a crowd of people.

Pyle is the brash young idealist CIA agent sent out by Washington on a mysterious mission to Saigon, where the French Army struggles against the Vietminh guerrillas. According to Greene’s narrator Fowler remarks of Pyle, “I never knew a man who had better motives for all the trouble he caused.” The “Quiet American” would become the most controversial novel of the author’s career

As young Pyle’s well-intentioned policies blunder into bloodshed, Fowler, a seasoned and cynical British reporter, finds it impossible to stand safely aside as an observer. But Fowler’s motives for intervening are suspect, both to the police and himself, for Pyle has stolen Fowler’s beautiful Vietnamese mistress Phuong.

I obtained the “Graham Greene Centennial Edition” with the introductory essay by Robert Stone who speculates on how true to life the plot was. “The bombing described in which plastique explosives were set off in downtown Saigon, apparently involved the Cao Dao sect but American historians deny the CIA was involved and even in the novel the motive is vague. Stone goes on to say, “but in the larger sense the Vietnamese who gave their lives to fulfill the ambitions and “tough-mindedness. Of American schemers, the McNamaras, the Bundys, the Rostows, and the Colbys are such that no man can number. I do not believe the word innocent, even in Green’s elusive definition, can be applied to them.”

This Penguin classic version of the book, which has over 1,700 titles provide authoritative texts enhanced by introductions and notes by distinguished scholars and contemporary authors. In the online version on Amazon which indicates “Look Inside”, I found an article by Robert Futrell, “Origins of the American Commitment to Vietnam” as well as a “National Security Council Position Paper” on the U.S. involvement in Vietnam which provided even more on the historic context to Greene’s story.

Author John le Carre sums up what makes this author so special, “Greene had wit and grace and character and story and a transcendent universal compassion that places him for all time in the ranks of world literary.”