The Farm on the River of Emeralds
By Moritz Thomsen
Reviewed by Mark D. Walker 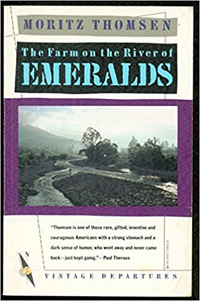 AtThe book: Recounts the author’s struggles, in company with a thirty-year-old semiliterate black Ecuadorian, Ramon and his wife Ester.against nature, history, tradition, and other men in their efforts to run a tropical farm in accordance with fair play and racial equality

The author is a modest man, a chain smoker, farmer who conserved his passions were centered around farming. He was honest to a fault, a brilliant story teller. He used simple language and had a speakikng voice that is both grave and humorous reflecting both compassion and fata

He describes the impact of his hatred for his father in this book as well as the others he’s authored over the years. A domineering father who condemned him for joining those “communists” at the Peace Corps. His anger, fear and pain bear through out the book.

As a chain smoker, his emphaysema worsened. He lives in a tree house with a typewriter, books, a honograpgh and classical records.

He was always forthright about his frailties. His writing was morbid and ghoulishly humorous. He was able to enter the skin and pschi of his neibhors and described their passions and ignorance with great candor.

He was unique in several ways. He joined the Peace Corps at 53 and then dropped out of the privileged society he had known and went back to the jungles of Ecuador. Together with Ramon Prado, a poor pblack famer twenty years his junior, he set out to build a form on the Esmeralas River.

First he stayed around– Twenty years after his Peace Corps he was committed to the place and the local population. He put down roots which allowed him to emerse himself in the local culture and economy and understand its dynamics like few. As his friend and fellow RPCV author Paul Theroux puts it, “Thomsen is ne those rare, gifted, inventive and courageious Americans with a strong stomach and a dark sense of humor, who went aways and never came back—just kept going.”

His world view: Thomsen’s worldview is reflected in a statement he once made: “Living Poor is like being sentenced to exist in a stormy sea in a battered canoe, requiring all your strength simply to keep afloat; there is never any question of reaching a destination. True poverty is a state of perpetual crisis, and one wave just a little bigger or coming from an unexpected direction can and usually does wreck things.

He taught all PCVs/RPCV’s the limitations of imposing ones will….in a society that rejects much of what we’re taching and is an able or willing to change

Many of us were allowed to integrate into another country’s society my “Marring in”, yet Moritz held a very special place in Ecuadorian socity. A youn Ecuadorian generation of writes found Morit’s works worthy of rediscoverty and celtration. And a long with ex-pat writers, staged an International Conference on Moritz in Quito. According to fellow RPCV author and friend, Tom Miller, the “conference filled large tables in quite restaurants with foreighners and locals energizey by his analysis and pending posthumous works.” (at least one more manuscript is still out there and unpublished…)

Since 1992, an organization named Peace Corps Writers awards an annual prize for the best short written about the experience of the body Peace named Moritz Thomsen Peace Corps Experience Award. Several scholarly studies affirm and confirm the idea, widespread among a wide group of readers, that Moritz Thomsen is one of the most important but least known of the second part of the twentieth century American writers.

In 1991, he fied of cholera, a poor mans’ disease, in kGuayaquil. He didn’t leave a will so the distribution of his limited posessions was complicated, especially the control over his literarture. Yet his influence on authors—both RPCV and Ecuadorians was extensive.