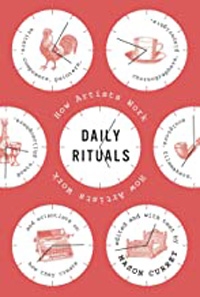 I learned about this book from a speaker at the Phoenix Writers Network and began reading some of the 161 short profiles from famous authors and artists each evening, which I found inspirational as well as an opportunity to rethink my approach to writing and how to be both creative and effective. I’ve often wondered how other authors and artists do meaningful creative work and earn a living, which many of these profiles deal with.

According to the publishers, this book brings together “Writers, composers, painters, choreographers, playwrights, poets, philosophers, sculptors, filmmakers and scientists on how they create (and avoid creating) their creations. “

The author describes his own “rituals” for writing this book:

Nearly every weekday morning for a year and a half, I got up at 5:30, brushed my teeth, made a cup of coffee, and sat down to write about how some of the greatest minds of the past four hundred years approached this exact same task— that is, how they made the time each day to do their best work, how they organized their schedules in order to be creative and productive. By writing about the admittedly mundane details of my subjects’ daily lives— when they slept and ate and worked and worried— I hoped to provide a novel angle on their personalities and careers, to sketch entertaining, small-bore portraits of the artist as a creature of habit. “Tell me what you eat, and I shall tell you what you are,” the French gastronome, Jean Anthelme Brillat-Savarin, once wrote. I say, tell me what time you eat, and whether you take a nap afterward.

The author also goes on to reveal more about why and how he wrote this book:

In that sense, this is a superficial book. It’s about the circumstances of creative activity, not the product; it deals with manufacturing rather than meaning. But it’s also, inevitably, personal. (John Cheever thought that you couldn’t even type a business letter without revealing something of your inner self— isn’t that the truth?) My underlying concerns in the book are issues that I struggle with in my own life: How do you do meaningful creative work while also earning a living? Is it better to devote yourself wholly to a project or to set aside a small portion of each day? And when there doesn’t seem to be enough time for all you hope to accomplish, must you give things up (sleep, income, a clean house), or can you learn to condense activities, to do more in less time, to “work smarter, not harder,” as my dad is always telling me? More broadly, are comfort and creativity incompatible, or is the opposite true: Is finding a basic level of daily comfort a prerequisite for sustained creative work?

He goes on to say:

The book’s title is Daily Rituals, but my focus in writing it was really people’s routines. The word connotes ordinariness and even a lack of thought; to follow a routine is to be on autopilot. But one’s daily routine is also a choice, or a whole series of choices. In the right hands, it can be a finely calibrated mechanism for taking advantage of a range of limited resources: time (the most limited resource of all) as well as willpower, self- discipline, optimism. A solid routine fosters a well-worn groove for one’s mental energies and helps stave off the tyranny of moods. This was one of William James’s favorite subjects.

The book includes 27 graphics and photos, such as Ben Franklin’s ideal daily routine, from his autobiography, which starts each morning with the following question, “What good shall I do this day?” The opening quote of the book from Thomas Mann, “Death in Venice,” anticipates what much of the book’s content will try to answer, “Who can unravel the essence, the stamp of the artistic temperament! Who can grasp the deep, instinctual fusion of discipline and dissipation on which it rests!? An extensive set of “notes” and permissions can be found at the end.

I was surprised at the limited background of the author, who looked like a student fresh out of high school from his photo. The author graduated from the University of North Carolina at Asheville and his writing has appeared in Slate, Metropolis, and Print. Then again, his book was published by Alfred A. Knopf, Publishers and he has a second book out, “Daily Rituals: Women at Work.” And according to “WorldCat,” the largest library support service, it’s been translated into thirteen languages.

I gravitated first to my favorite authors like Graham Greene who decided to write a book of questionable quality because it would be a good seller and allow him to pay the bills while finishing his classic, “The Power and the Glory.” According the profile on Greene, “…To manage the pressure of writing two books at once, he took Benzedrine tablets twice daily, one upon waking and the other at midday. As a result, he was able to write two thousand words in the morning alone, as opposed to his usual five hundred….”

Charles Dickens produced fifteen novels, ten of which are longer than eight hundred pages, plus stories, essays, letters and plays including my favorite, “A Christmas Carol.” But, according to his profile, he needed special conditions. “First, he needed absolute quiet; at one of his houses, an extra door had to be installed to his study to block out noise. And his study had to be precisely arranged, with his writing desk placed in front of a window and, on the desk itself, his writing materials—goose-quill pens and blue ink—laid out alongside several ornaments…”

Environmentalist, essayist Edward Abbey replied to one fan with, “Between books I take vacations that tend to linger on for months. Indolence and melancholy then become my major vice, until I get back to work. A writer must be hard to live with: when not working, he is miserable, and when he is working, he is obsessed. Or so it is with me.”

I also checked out the profiles of several of my favorite musicians like George Gershwin, who, according to his brother Ira, “He never released.” In fact, he typically worked for twelve hours or more a day, beginning in the late morning and going until past midnight….He was dismissive of inspiration, saying that if he waited for the muse, he would compose at most three songs a year…”Like the pugilist,” Gershwin said, “the songwriter must always keep in training.”

Franz Kafka, frustrated with his living quarters and day job, wrote in a letter to Felice Bauer in 1912, “time is short, my strength is limited, the office is a horror, the apartment is noisy, and if a pleasant, straightforward life is not possible, then one must try to wriggle through by subtle maneuvers.”

An excellent and inspiring read for all writers and artists looking to improve their habits and creativity as well as appreciating our special vocation by looking in at the “rituals” of others.