De Grazia: The Man and the Myths
By James W. Johnson with Marilyn D. Johnson
Reviewed by
Mark D. Walker 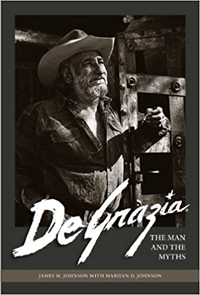 Over the years I’ve brought family and friends to the “DeGrazia Gallery” in the Sun Historic District in Tucson, Arizona. You knew you were in the Southwest with adobe buildings in a desert setting, including a chapel in honor of Father Kino, and an artist’s residence. We’d enter the massive gates at the entrance, which were replicas of the Yuma Territorial Prison, to view the multiple collections that included oils, watercolors, sketches, sculptures, ceramics and jewelry. And yet I never knew much about the creative genius behind it all, Ted De Grazia.

I turned to this book, which was written by a University of Arizona journalist professor and a former reporter and copy editors James and Marilyn Johnson, who produced a well-researched, and impressively documented study of this eccentric but very talented artist and author. James has written five other books including one about Arizona politician Morris Udall. This book is enhanced by personal photos and prints of De Grazia’s colorful art.

The De Grazia family had strong ties to Italy and visited their family in the 1920s, but returned abruptly in 1925 as they were afraid that Ted (the artist) and his two brothers might be recruited into Benito Mussolini’s fascist youth movement. He did have an opportunity to practice his music and was exposed to the art of the Catholic Church and took up sculpturing.

Back in Arizona, De Grazia spent time with his father in the copper mines of Morenci where, There was always the dark shadow of the disaster whistle—a heart rendering sound, which brought out the women and children waiting in terrified agony, waiting the fateful news, waiting for their men to appear—stark faces and suspense while the men emerged from under the ground dripping in red mud. De Grazia and his father decided that he must go to college to avoid a life of mining so he went to the University of Arizona in Tucson where he would be exposed to the influential Mexican artists Diego Rivera and Jose Clemente Orozco. Later on in his artistic career, De Grazia would travel to Mexico City to show his sketches to Rivera and eventually he’d study under both of Mexico’s most iconic artists.

Over the years, De Grazia would live with, and paint about, many Indian groups in the Southwest, starting with the people Tehuantepec, but also the Navajo, Apache, Taos Pueblo, Hopi, Yaqui, Cocopah or Papago. He frequented many a trading post as the best place to get to know the locals. In 1975 he’d self-publish “De Grazia Paints the Papago Indian Legends,” which drew some heat from the local Indian leaders, but this didn’t deter him.

Like many successful artists and writers, De Grazia’s work was most important for him and in later years he said, “While work’s important to me, I can’t go anywhere as a human being without being recognized,” and his family paid the price. He was married twice and had several lovers. His son, Nick, never got out of his father’s shadow and when asked in an interview if he’d attend his father’s funeral said, “I figure I’d be a hypocrite if I did go. He wasn’t anybody I was close to.”

Selling his prints at prices the average “Joe” could afford became the secret behind De Grazia’s artistic and financial success. We have no less than five prints in our guest room in Scottsdale. And yet one of his originals, “Los Niños,” which remains at the Gallery of the Sun was valued at between $40,000 and $50,000.

De Grazia actually worked hard to please the public, turning out commercial art by the “truckload.” Twenty-nine years after his death he is still recognized—by the Arizona Daily Star—for his kitsch. In a special section on “Arizona at 100: the Arts, Business, People, & Places,” De Grazia’s magnets were listed among the top five kitsch items in Arizona statehood history, along with images of coyotes and Kokopellis.

The authors of this book tell the tale behind the incident in May of 1976 when De Grazia made a trek into his beloved Superstition Mountains, which gained international attention when he burnt as many as one hundred of his paintings to protest federal estate taxes, “When I sell a painting and take in money, I expect to be taxed,”…But I don’t think there should be a tax on paintings and other works of art that aren’t sold. My heirs (can’t) afford to inherit my works.” The authors go on to analyze the incident and determine De Grazia might have exaggerated the number of paintings actually destroyed, but he made his point in a most dramatic way!

The “Postscript” in the book’s Epilogue sums up De Grazia’s legacy, “Surely he will always be known as the self-proclaimed “world’s most reproduced artist.” At the time of his death in 1982, more than 100 million reproductions of his images, including prints, bank checks, postcards, posters, lithographs, magnets, candles, figurines, collector plates and greeting cards, had been produced and spread around the world.

De Grazia’s wife, Marion, best summarized the challenges facing the authors depicting the life of De Grazia, who once described himself as “not saint nor devil, but both:”

Writing about an artist is a thousand sidesteps with a miracle in between. No one knows the miracle, only the sidesteps. If you see a flash of light wait and watch for revelations.

This book not only provides valuable insights into the life of De Grazia, but will further enhance the public’s appreciation of the art and setting of the Gallery which stands in homage of this great artist.

Mark D. Walker, author of the award winning memoir/travelogue, “Different Latitudes: My Life in the Peace Corps and Beyond,” is “an engaging story of one man’s physical and spiritual journey of self-discovery through Latin American, African, European, and Asian topography, cuisine, politics, and history. Informative, compelling, impressively candid.” Midwest Review. Other recent publications include Ragazine, a feature article in the English speaking Revue Magazine, as well as additional articles in WorldView Magazine the “Crossing Class Anthology” from Wising Up Press. www.MillionMileWalker, https://www.facebook.com/millionmilewalker/