BOOK REVIEW OF “DO I MAKE MYSELF CLEAR? WHY WRITING WELL MATTERS”
By Harold Evans
Reviewed by Mark D. Walker
June 12, 2017 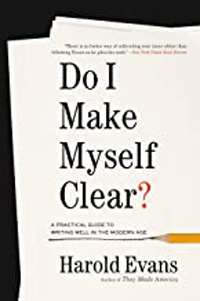 After writing my first book I felt it was time to return to the “classroom” and sit by the side of one of the best editors and authors of our time and continue working on my art. I was not disappointed. The insights on good writing permeated the entire book, and as an added benefit the book was filled with insightful commentary on our times presented with both cutting humor and satire, and the graceful charm the British are so proficient at.

The growth of “alternative facts” and the “fog” caused by misinformation are clouding our society and indeed our democracy’s ability to function properly. In this digital age the right words are oxygen to our ideas, as a desire to be precise is vanishing from our culture and writing of every kind is trending towards more speed and information but far less clarity. And this growing amount of misinformation comes from the very top of our leadership as countless Tweets spew out of the Oval Office, distracting reporters and society from what’s really important and how we might come together to solve some of our pressing problems.

Harold Evans proved to be a keen observer of our time and country as well as in writing. A former editor of the Times of London and recipient of the British Gold Award for Lifetime Achievement in Journalism, he was knighted and is currently the editor at large for Reuters. Oftentimes it takes an outsider like de Tocqueville to see through the veneer of our society and articulate what’s really happening and what the implications might be for the future.

He goes on to provide examples of how “zombies” and “flesh-eaters” threaten prose. A “zombie” is a noun that has devoured a verb, so document becomes “documentation” and participate becomes “participation.” The “flesh eaters” are unnecessary words, pompous phrases and “propositional parasites” that eat space and reduce the strength of one’s writing, so “Named” becomes “A man/woman by the name of” and “stay” becomes “continue to remain.”

The author also tells impressive stories on the power of words and how their authors were inspired to articulate what they felt. Like FDR following the bombing of Pearl Harbor when he “deleted the murmuring commas in the opening sentence and came up with the killer phrase live in infamy set between two dagger-point dashes.”

He also shows how words make reality incomprehensible, such as a rental car warranty. He adds some humor to one example of this triple talk with, “The cost of any repairs carried out on the instructions of the Renter or Driver without the prior written approval of the Owner shall be the responsibility of the Renter” to which the author responds with a “Who dat?”

As a student of sociology and history, I was delighted at the timely social commentary which permeated the book. He says that “Donald Trump was a joke until he wasn’t.” He refers to a piece in the Wall Street Journal which suggested a parallel to the presidential election and “the last dark age of Western politics” and compares Trump with Benito Mussolini with parallels that include a growing belief that democracy was rigged and that immigrants were plundering the economy. The author points out that these are similarities and that the readers should not be indifferent to the parallels.

Other interesting social commentary includes a look at the revision in the test of the Social Security act of December 2015 and May 2016 as an example of “social and political ‘meanness’ like Kafka waking up in Bleak House.” Where “language defies understanding and, in the best Orwellian tradition, the text imposing cuts in Social Security benefits is headed “Protecting Social Security Benefits.” And “vast numbers of Americans fail to claim the money they could. There are more than nine thousand different claiming options—and the administration is prohibited by law from giving case-by-case personal advice.” He strengthens his point with, “But the millions of people who have paid a lifetime of dues are entitled to clearer English than is found in the 2,728 rules governing Social Security and the Program Operations Manual System which are thicker than the Bible, to the point that the Social Security Administration stopped printing them in the 1980s.

Evans not only provides practical examples of how editing and rewriting can make for better communication, even in the digital age, but provides insightful commentary on our times with cutting satire and graceful charm.