Dream Hoarders: How the American Upper Middle Class is leaving everyone else in the dust, why that is a problem, and what to do about it
By Richard V. Reeves
Reviewed by Mark D. Walker 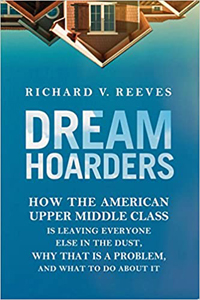 This is the perfect companion book to J.D. Vance’s, Hillbilly Elegy: “A Memoir of Family and Culture in Crisis,” which I reviewed almost a year ago, as both authors provide examples and quantifiable, sociological analyses on how extensive the gap between the wealthy and poor continues to grow here in the U.S. Although it is well known that the top 1 percent are concentrating their wealth at an accelerated rate, the author focuses on the top 20 percent of society he calls the “upper middle class,” going beyond income to a broader spectrum of indicators of the quality of life such as education, housing, and health care, as well as other basic goods and services.

The author confronts one of the greatest myths, which is that we’re a “meritocracy” where the upper middle class justifies their lofty position wholly on merit. The author asserts that the myth of the United States as a classless society….complicates any examination of class. The author is British and has always admired our nation’s spirit of social equality and yet has concluded, “If anything, (the American class system) has become more rigid than in the United Kingdom.” The author goes on to say that the real problem is that society is not competitive enough, partly because of the anticompetitive opportunity hoarding he describes throughout the book.

The author goes on to suggest a number of concrete solutions to restore a more equitable social order:

⦁ Improve the quality and resources available to parents of poorer members of society
⦁ Better quality teachers for the poor with incentives for teachers working in our inner city public schools
⦁ Elevate the quality of vocational, post-secondary school training
⦁ “Curb” exclusionary zoning
⦁ End legacy admissions
⦁ Open internships to poorer children. The president of the Ford Foundation said, “Simply by making them more accessible to all, we can narrow the inequality gap while widening the circle of opportunity.”
⦁ End repressive tax subsidies. One revealing graph shows that tax deductions for affluent homeowners amount to $70 billion (many poorer families can’t afford a home and are stuck in a cycle of renting).

The author is a senior fellow in Economic Studies and co-director of the Center on Children and Families at the Brookings Institution. He considers himself a member of the upper middle class and asserts that, “It is time to check our privilege”…and a time for reflection; “if the conscience of the upper middle class is to be awoken and if we are once again to share, rather to hoard, the American dream.” This timely book shows how American society has become class-defined, which traditionally, Americans have rebelled against and what can be done to restore a more equitable society.

As a Peace Corps Volunteer, reviewer Mark Walker implemented fertilizer experiments in Guatemala and Honduras, although his most important accomplishment was his marriage to his wife and three children, all born in Guatemala.

His involvement promoting “World Community Service” programs led to his receiving the most prestigious Service Above Self Award from the Rotary International Foundation, and all three of his children have participated in Rotary’s Youth Exchange program. His memoir, Different Latitudes: My Life in the Peace Corps and Beyond” won Honorable Mention in the Arizona Literary Award competition. He’s published various articles, including one in the summer issue of “Advancing Philanthropy.” Mark and his wife, Ligia, live in Scottsdale, Arizona close to their three children and seven grandchildren.