Enchantment and Exploitation: The Life and Hard Times of a New Mexico Mountain Range
By William deBuys
Reviewed by Mark D. Walker 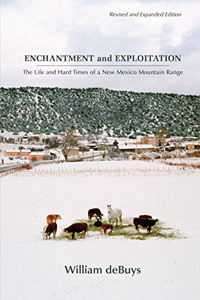 For years, I’ve taken my children from Santa Fe to Taos on the “high road” (highway 76), stopping off at the “Rancho de Chimayo” for traditional New Mexican food, including those light “sopapillas” the kids would fill with honey, and from there we’d visit the Santuario de Chimayo, one of New Mexico’s most beautiful adobe chapels It is said to be built on a site where the earth itself has the power to heal ailments and infirmities of all kinds, and the “promesas,” or promises, are tacked to the wall all around the altar. These ancient beliefs are still held by many of the locals to this day.

Towards the end of the road, we’d always stop by the magnificent church built in 1766 by pioneers in Trampas, and from there wind down the road and eventually reach El Rancho de Taos with its very special “Pueblo” where local Indian families still dwell.

I decided to learn more about the incredible natural and cultural diversity in the area where some beliefs and enclaves have lasted for centuries. Although much of the population in the area speak Spanish, their culture precedes much of the “Hispanic” community, reaching back to, and adhering to, beliefs from the Colonial period when the area was part of Mexico. The drama of the modern day diversity and the social stresses caused by economic development were well portrayed in John Nichols’ “Milagro Beanfield War,” in which he depicts “just another paranoid, money-grubbin’ boardwalk—a mountain Las Vegas, Atlantic City, Tahoe, in miniature.”

I was not disappointed by William deBuy’s Enchantment and Exploitation, first published in 1985 and since then has become a New Mexico classic. It offers a complete account of the relationship between society and environment in the Sangre de Cristo Mountains of northern New Mexico, a region unique in its rich combination of ecological and cultural diversity.

The book is supplemented by over 65 photos and illustrations, eight maps and three tables. And at the end an extensive list of notes, a bibliography, and an index are available as back-up for those who want to dig deeper into the history of the region. One of the reasons the author wrote the book was to show that “centuries of human experience afford abundant examples of small miscalculations leading to large-scale misfortune”. One hundred years ago, for instance, a great many relatively small decisions made by stockmen to increase the size of their herds resulted in a debacle of overgrazing that seriously undermined the pastoral economy of the mountain villages. He goes on to say, “The trick of living in the mountains begins with understanding the power of the landscape and the limits it imposes…”

The book explains the source of the name, “Sangre de Cristo,” the mountains that cover the north central part of the state into Colorado, and were known as the “Sierra Madre” mountains by the Spanish colonists. The name came from the passionately religious “Penitente Brotherhood” during the middle and late 1800s. This sect’s rites featured bloody self-torture and flagellation, and became famous for its yearly re-enactments of the original shedding of the Sangre de Cristo.

According to the author, the penitents were a response to the convergence of three kinds of severe social change on the Hispanic community:

⦁ The ecclesiastic abandonment that deprived the villagers of tradition and ritual, as well as their main source of guidance and leadership.
⦁ The stress of rapid geographic expansion as new communities formed almost overnight, while older communities suffered from the departure of pioneers and the breakup of families.
⦁ The psychic burden of a perception of lost status and cultural inferiority, which the Hispanos acquired as a result of the Anglo conquest.

Although dominated by males, the Brotherhood included women as, “auxiliadores,” who helped with the preparation for wakes and religious ceremonies, but were never initiated as full-fledged members. Yet women probably practiced various physical penances including a wearing a “bracelet” of cactus under their clothing or growing over rough ground to the “Calvario,” or Calvary, where the Brothers enacted their ritual crucifixions.

Land tenure would play a crucial role in the cultural and economic development of north central New Mexico. No one had to tell the villagers that the grazing issues and the land grant issue were essentially the same thing. They knew that their ancestors had grazed their herds and flocks without restriction, and most of them believed that if they could get their land back from the Forest Service, their worst problems would be solved. These concerns would eventually lead to the “Alianza movement,” which generated a good deal of violence and commotion in the late 1960s.

Taking the land to establish a national park can create, or destroy, nearly everything that matters like jobs, roads, livestock, and even landscape. According to the author, “No other National Forests in the United States are plagued with as unhappy a historic legacy as those of northern New Mexico, and none exist in as complex a cultural environment. None can claim, as these can, that because of traditions that are centuries old, the cutting of firewood in piñon and juniper woodlands generates more public controversy than the management of commercial saw timber.

The many graphics throughout the book add to a better appreciation of the cultural diversity and pressures in the area, such as a painting by Ernest Blumenschien, one of the founders of the Taos art community in 1936, “Jury for Trial of a Sheepherder for Murder” suggested the uneasiness felt by many villagers in dealing with Anglo law and society.

The cultural diversity was further enhanced in the late 1960s, as Taos and the surrounding mountains were a “mecca of the countercultural world. Hippies from every corner of the country crowded to the Sangres seeking open space, and freedom from a society they considered corrupt and repressive. One result was that it brought Anglos permanently into the communities where none had lived before. “Today at least one or two Anglo families live in virtually every mountain village, and many often possess the same qualities of hardiness, self-reliance, and inventiveness that characterized the homesteaders of a hundred years ago.”

As of 2015, a revised and expanded edition was produced with a last chapter assessing the quality of the journey that New Mexican society has traveled in that time–and continues to travel. In the new final chapter, deBuys examines ongoing transformations in the mountains’ natural systems–including, most notably, developments related to wildfires–with significant implications for both the land and the people who depend on it. As the climate absorbs the effects of an industrial society, deBuys argues, we can no longer expect the environmental future to be a reiteration of the environmental past.

The author is more than qualified to produce this fascinating history of north central New Mexico. He holds a Ph.D in American Studies from the University of Texas at Austin and has written a number of other books published by the University of New Mexico Press. He also knows the mountains and their residents “as intimately as he knows his primary and secondary sources.”