Book Review of “Restoring the Soil: How to use green manure/cover crops to fertilize the soil and overcome droughts”
By Roland Bunch
Reviewed by Mark D. Walker 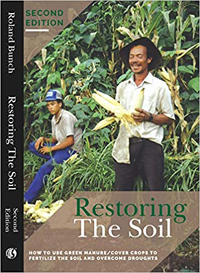 As the UN meets to discuss climate change and young people demonstrate around the globe for leaders to take action, this provides the perfect backdrop for the second edition of this book. Small landed farmers around the world face some of the harshest growing conditions globally, yet they produce the majority of the world’s food. Soils in these areas often lack nutrients and water holding capacities, due to erosion or poor soil structure. Environmental and political factors have led to food aid having ballooned from under 10 million before 2016 to 20 million in 2016-17, to somewhere close to 30 million today. According to the United Nations’ declaration of a famine in 2017, “we are in the midst of the ‘worst humanitarian crisis since World War II.’” A recent article in “Foreign Affairs” predicts up to one billion climate “refugees” by the year 2050.

The cover photo from the Valle de Angeles in Honduras, where I met and worked with the author years ago with World Neighbors, tells much of what can be achieved with green manure/cover crops, which is the focus of this book:

…The farmer is proudly showing us, in his right hand, the two large ears of maize he harvests per plant now, instead of the one medium-sized ear per plant he used to harvest. Because he has almost tripled his productivity, he is no longer forced to spend months each year cutting sugarcane on a plantation; he now harvests more than enough maize for his family on his own land. The very healthy maize crops, as well as the black, organic-matter laden soil at his feet, show the impact of his green manure/cover crops, “mucuna” (velvet bean).

According to the author, the greatest surprise from his over 50 years of agricultural work and research abroad was the resilience the cover crops provided against drought. They also have carbon sequestration, among other capabilities, which Bunch claims causes cover crops/green manures to “have the ability to largely take care of the impact of climate change on agriculture for at least the next hundred years.”

The first part of the book provides background information on green manures and cover crops and the second part explains how to select the best cover crop system for each situation in programs all over the globe. Before going too far, be sure to review the “Abbreviation log” at the beginning so you know that “SOM” is Soil Organic Material and “Kg” is Kilogram. Various annexes at the end of the book provide additional terminology, technical information and an extensive list of green manure/cover crop species mentioned in the book and where the systems can be found.

One of the great strengths of the approach Bunch describes is his ability to mobilize small farms over a long period of time to teach one another. He describes an improved fallow system, which was spread by one farmer onto over 2,000 farms over a 15-year period. This farmer-to-farmer approach was also the focus of his classic work on agricultural extension among small landholder farmers, called Two Ears of Corn (World Neighbors), which was translated into 10 languages. This was obligatory reading for most of the Peace Corps Volunteers who worked in agricultural programs in Latin America.

He works with ECHO, which has a demonstration farm in Florida, and represents a network of international development workers, and they published the book. Bunch has consulted for groups like the Ford Foundation and Cornell in programs all over the world. He was nominated for the Global 500 Award, the End the Hunger Prize of the President of the United States, and the World Food Prize.

The book has been praised by the likes of Dr. Robert Chambers, Director of the Institute of Development Studies at the University of Sussex. This is the book we have been waiting for. Restoring the Soil distils and condenses a lifetime of learning and a wealth of experience. It is a wonderful source of knowledge and advice about a vital and neglected area of huge potential, a treasure trove for small farmers around the world and those who work with them.

I’ve already shared this with several of the organizations I support in Guatemala that support small farm landholders in designing sustainable cropping systems, and I urge my readers to do the same for any of the groups they like that are focused on dealing with the world’s growing hunger and climate-related challenges.