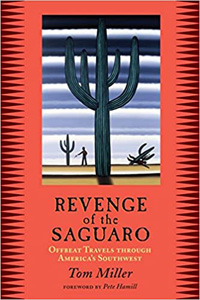 As someone who has travelled the world and spent much of my adult life in the Southwest, I appreciated the author’s perspective and insights on this unique and often crazy part of the country. I learned about parts of the region I’d never heard of, as well as appreciated parts of the area I was aware of, but not in the way the author tells it, such as the filming of “The Milagro Bean War” and the mining wars of Bisbee.

The title of the book, which alludes to a 3,000 pound saguaro cactus outside of Phoenix falling over on its own drunken assassin who tried to bring it down with a pistol, provides a moral vision while reveling in the physical and cultural activities so unique to this region. Originally the book was published by National Geographic as Jack Ruby’s Kitchen Sink.

The author has been compared with iconic Southwest writer, Ed Abbey, who wrote one of the great books of the American Southwest, “Desert Solitaire,” but according to Miller “Abbey’s notoriety never broke through the invisible barrier separating ‘underground following’ from popular acceptance.” He went on to express admiration for Abbey’s rage and desire for a desert solitaire, but never sounded self-righteous, as Abbey often did. He goes on to quote Abbey to introduce the Pinacate area as, “the bleakest, flattest, hottest, grittiest, grimmest, dreariest, ugliest, most useless, most senseless desert of them all.” And yet Abbey made 50 trips there over a ten-year period and considers it “one of the last strongholds of the Sonoran Desert.”

Unfortunately, the author doesn’t provide any maps in order to locate some of the lesser known locations described in his book, so I pulled out my “Sonoran Heritage: The Human Story,” which is part of the “Geo Tourism, Map Guide” produced by National Geographic to find ‘El Pinacate and Great Altar Desert Biosphere Reserve,” which is just north of Rocky Point. The author actually participated in the production of this incredible tool of appreciation for the Sonoran desert and wrote the introductory piece on it.

The author provides many insights into the making of the popular movie, “The Milagro Beanfield War,” based on the John Nichols’ classic comedic fiction and, twelve years later, made into a film directed by Robert Redford. The location of choice was the 250-year-old village of Chimayo, the location of one of my favorite local restaurants, until some of the locals opposed a movie personality with his multi-million-dollar budget in their town, so the little town of Truchas got the nod—and the notoriety. The author was an advisor for the film and met Brazilian movie star Sonia Braga, who maintained a two-bedroom townhouse in Santa Fe and, according to Miller, tried to get him drunk!

Miller introduces one of my favorite, funky mining towns with, “I went to jail on my first visit to Bisbee” (he hopped into a van with some friends to visit an anti-Vietnam war buddy who had been thrown in jail) and fell in love with Bisbee. The Phelps Dodge Company ran the copper mine and the shift-change whistle “pierced the air three times a day,” according to the author as a reminder of who ran the town.

In 1917, according to the author, the town’s biggest deportation was carried out by the local sheriff acting on behalf of mining interests. He deputized a “Loyalty League,” which departed at daybreak to round up strikers, sympathizers and anyone deemed to be a supporter of the workers. Evidently, Bisbee was what some called the “Free State of Cochise”—a mix of ornery cultures linked by geography and independence…”

As mine’s ore dwindled, Phelps Dodge pulled back its operation, and the author describes an interesting demographic shift with, “The new pioneers straggled into the Cochise County seat by ones and twos, arriving in VW vans and secondhand pickups from throughout the West…They were determinedly bad artists, newly divorced women in their first retail enterprise, self-absorbed poets, semi-retired bikers, tuneless musicians and toolless carpenters…” making what is today an eclectic mix of characters.

As Pete Hamill points out in his introduction, “Tom Miller has brought the region to life in his own special way, without donning the grouchy costume of what used to be called a ‘regional’ writer. He is not defensive; he is celebratory,” which makes for a delightful, informative, fun read.

I’ve met the author a number of times, as we hold a love of Latin American and the American Southwest in common. In his case, his love is Cuba with a Cuban wife, while mine is Guatemala with a Guatemalan wife. He’s visited Cuba constantly over the years and wrote, “Trading with the Enemy,” which takes his readers on journeys through Cuba and he edited three compilations including, “Travelers’ Tales Cuba.” Only recently did I read one of his most acclaimed books, “The Panama Hat Trail,” which was a fascinating journey between the producing of the hat in the rural outbacks of Ecuador to its eventual sales in New York City. In 2008 Miller was honored in a ceremony in the Historic Center of Quito with a proclamation as the “Illustrious Guest of Quito” for his literary contribution.

In recognition of his work, the University of Arizona Library has acquired his archives and mounted a major exhibit of the author’s papers, which is where I’ve met with him several times. I’ve been studying his formidable collection of materials about Moritz Thomsen, a personal friend, and together with Miller, consider him one of the best travel writers. Miller has been affiliated with the school’s Latin American Area Center since 1990, and makes his home in Tucson with his wife Regla Albarran.

Mark D. Walker was a Peace Corps Volunteer in Guatemala and spent forty years helping disadvantaged people in Guatemala, Colombia and Sierra Leone, among other places. Walker has written and made presentations in both English and Spanish on fundraising at a number of international conferences around the world. He’s a Past President of the Greater Arizona Association of Fundraising Professionals (AFP) and is the Past President of the Planned Giving Roundtable of Arizona. Walker came to Scottsdale with Food for the Hungry and went on to work with MAP International, Make-A-Wish Foundation International, and was the CEO of Hagar USA, which works with survivors of human trafficking. His honors include the “Service Above Self” award from Rotary International. His first book, “Different Latitudes: My Life in the Peace Corps and Beyond,” was published by the Peace Corps Writers Group and was recognized at the Arizona Literary Association awards ceremony. An article with the same title was published by the 2017 Summer Edition of Advancing Philanthropy. “The Fundraiser: Running risks in Nepal and Bolivia” was published in the Spring 2018 edition of WorldView and his “The Making of the Kingdom of Mescal: An Indian Adult Fairy-Tale” was featured in the 2018 edition of the Revue Magazine. His wife, a Spanish teacher, and three children were born in Guatemala.