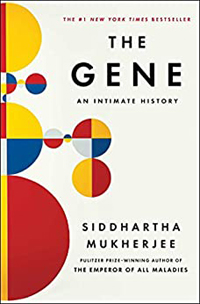 Interest in the power of the gene has heightened by the popularity of the numerous ancestry testing sites, like 23 & Me, which is the one I used to find out that I was 99% “Northwestern” European, which included Britain and Ireland (this would also include Scotland, which wasn’t a surprise) but the “Irish” ancestry was. The book provides a comprehensive history of the most intimate science of our time—the fundamentals of heredity. What better person to tell this story than the author of The Laws of Medicine and The Emperor of All Maladies: A Biography of Cancer, which won the 2011 Pulitzer Prize for General Nonfiction and was voted one of Time’s 100 best and most influential books since 1923. Mukherjee is a Rhodes Scholar, a graduate of Stanford University and the University of Oxford, not to mention Harvard Medical School.

The author has embarked on a most ambitious quest to understand human heredity’s influence on lives, personalities, identities, fates and the choices we make as individuals. Through the story, the author’s own family members were present, plagued by mental illness. The book is divided into two parts. A vivid history of the development of genetics and then a meditation of the study of what it means for biology and medicine (not to mention human identity). He also explores the challenges and dangers of genetic modification.

For years, “experts” proposed that male homosexuality was caused by the distorted dynamics of a family, “by the fatal combination of a smothering mother who was often ‘close-binding’ and (sexually) intimate, if not overtly seductive, to her son and by a detached, distant father.” All of this changed in July of 1993 with the discovery of the so-called gay gene, which incited one of the most vigorous public discussions about genes, identity, and choice in the history of genetics. Just one of the surprises I came across in this eye-opening book.

The author also explores the future of this new, quickly developing science with the following quote from Gina Smith, author of The Genomics Age, “Probably no DNA science is at once as hopeful, controversial, hyped, and even as potentially dangerous as the discipline known as gene therapy.” He goes on to say, “It would rebound from the ugliness of the initial trials and learn the moral lessons implicit in the “cautionary tale of scientific overreach.”

Over the years, we can expect to see more headway on how genes can identify and prevent serious diseases. As I was writing this review, I listened to a story on Public Radio about a new test made possible through research at “T-Gen” (Translational Genomics Research Institute) here in Phoenix of a breakthrough that would decrease the test turn-around time for Valley Fever from 21 to only one day, which would accelerate the healing process.

As far as my own 23 & Me test, I added Ireland to the countries I needed to visit, which is fairly straightforward. Not so for one of my close Guatemalan friends whose test indicated over 80% of his family comes from the Iberian Peninsula, which includes Spain. This was not a surprise, but the 20% of Indian influence (Mayan Indian, in this case)) was a surprise and opened up some interesting questions and speculation. Although over 50% of the population is Mayan Indian, they are still ignored and considered second-class citizens to a degree making this revelation an embarrassment to some.

This book is possibly one of the greatest detective stories ever told. And Mukherjee tells a dramatic story that is sweeping and transcendent. A perfect read for anyone who wants to better understand and appreciate the considerable impact that genomics will have on our personal lives as well as new trends in health care.