The Givers: Wealth, Power and Philanthropy in a New Gilded Age
by David Callahan
Reviewed by Mark D. Walker 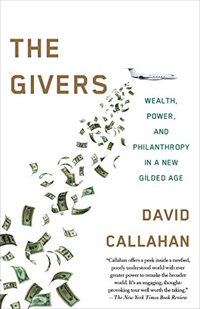 This book provides an inside look at the secret world of elite philanthropists whose wealth has increased over the years and how they’re wielding increased power to influence American life in ways both positive and negative. My friend, Peter Nagle, the President of Carlton & Company where I’ve been a V.P. and Senior Counsel for many years, sent me the book because it “has a lot to tell us about major gifts, what is going on in the present day and where the big-time philanthropy might be headed in the years to come. This is one of the two best books on the subject I have come across in many years.”

Ten years ago, I met the co-author of a book, which had a similar focus, “Philanthro-capitalism: How the Rich Can Save the World,” by Matthew Bishop, the New York bureau chief of the “Economist.” He interviewed such philanthropic powerhouses as Bill Gates, Bill Clinton, George Soros, Angelina Jolie and Bono to learn why they gave and were bent on saving the world. A similar tone was set by the most recent issue of “The Chronicle of Philanthropy,” titled, “Billion-Dollar Boom: The top 5 donors of 2019 gave over $1 billion each, and many wealthy Americans gave to urgent problems like climate change and inequality.” Michael Bloomberg headed the class at $3.3 billion.

Although media attention continues to focus on the best known philanthropists, especially those coming out of the Silicon Valley, like Bill and Melinda Gates, Mark Zuckerberg and Priscilla Chan, David Callahan analyses the rise of new power players who have created a second “Gilded Age” to influence behind the scenes on education, the environment, science, and LGBT rights, among other issues, and by so doing, impact government policy. After extensive research and interviews with donors and policy experts, the author investigates the impact of a power shift in American Society and how it enhances the growing inequality in the country and decreases the impact the majority of Americans have in defining the direction society is taking.

Grants made through the Silicon Valley Community nearly doubled in just one year alone, between 2014 and 2015—“soaring to $816 million” according to the author. Wealth accumulation would reach all time highs before the 2008 financial crisis, with the net worth of Forbes 400 hitting $1.57 trillion.

Warren Buffet has been most outspoken on the corrosive nature of inherited wealth, and when he pledged most of his wealth to the Gates Foundation, said, “I’m not an enthusiast for dynastic wealth, particularly when 6 billion others have much poorer hands than we do in life.” Michael Bloomberg would say, “Inheriting too much money at one time destroys initiative, distorts reality, and breeds arrogance.”

And yet, the author explains, Bloomberg worked through the Carnegie Foundation to give away $200 million to become the largest private funder of nonprofits in New York City. And in 2009 he’d spend $103 million on his final race for office, or about $183 per vote. But after winning the election, he’d pull the plug on the Carnegie grants program completely.

The author organizes these mega-givers into such groups as “Grandmasters, Super-Citizens, Disrupters, Leverage Points, Advocates, Heirs to Influence and the New Medicis.” One of his most poignant observations about modern philanthropy is that it, “… is not an organized system governed by any single set of ideas or group of leaders who are all on the same page. That said, one thing is clear about this rising power center in American life: Ordinary people have little influence over what it does.”

Although for the most part, Americans are unaware of the huge power that heirs are coming to wield through philanthropy. Some pushback against elites can be seen in social movement like the Tea Party and the presidential campaigns of both Donald Trump and Bernie Sanders. Many Americans resent being ruled by rich people, as there is a sense that such elites are out of touch with their own life experiences.

Some of the more nefarious acts of “giving” include efforts to gut the “Voting Rights Act of 1965,” which qualified as a “charitable” act. Philanthropists giving money to sway electoral outcomes are able to hide their tracks due to the lax reporting rules for nonprofits.

The author makes a plea to reform philanthropy so that it’s more aligned with American values, as an ever larger and richer upper class is amplifying its influence through large-scale giving in an era when it already has too much clout. And ends with, “We’re fast moving toward a future where private funders, not elected officials and the citizens they answer to, choreograph more of public life.”

The author is the founder and editor of “Inside Philanthropy,” a digital media site that covers the world of giving by wealthy donors and foundations. He’s the author of seven nonfiction books including, “The Cheating Culture: Why More Americans are Doing Wrong to Get Ahead.” He holds a Ph.D. in politics from Princeton University.

This book provides both a damning and persuasive critique of American philanthropy and the shift towards a more unequal balance of wealth and power. He also provides a clear warning on some of the directions society must take to change these powerful trends.

Several of his articles have been published in Ragazine and WorldView Magazines, Literary Yard, Literary Travelers and Quail BELL, while another appeared in “Crossing Class: The Invisible Wall” anthology published by Wising Up Press. His reviews have been published by Revue Magazine, as well as Peace Corps Worldwide, and he has his own column in the “Arizona Authors Association” newsletter, “The Million Mile Walker Review: What We’re Reading and Why.” His essay, “Hugs not Walls: Returning the Children,” was a winner in the Arizona Authors Association literary competition 2020 and was reissued in “Revue Magazine.”

His honors include the “Service Above Self” award from Rotary International. He’s the membership chair for “Partnering for Peace.” His wife and three children were born in Guatemala. You can learn more at www.MillionMileWalker.com and follow him on Facebook at https://www.facebook.com/millionmilewalker/ and www.Guatemalastory.net