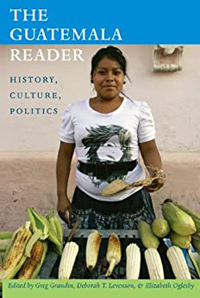 The Guatemala Reader is an impressive compilation of 200 texts in a broad, comprehensive introduction to Guatemala’s history, culture, and politics. I wish I had this when I was a Peace Corps Volunteer in the early 70s, or when studying for my Masters at the Institute of Latin America at the University of Texas later in the decade, not to mention over eight years working with different organizations, as these materials provide a wealth of insights into the beauty and complexity of Guatemala. This book will appeal to travelers, scholars, students and practitioners alike as it presents the stark realities behind the beautiful façade.

The editors bring together a formidable source of information about the Maya, including selections from the first piece, and an excerpt from the Popol Vuh, a mid-sixteenth-century text believed to be the single most important source documenting pre-Hispanic Maya culture. Acknowledged experts like Michael Coe provide fascinating background information on “Breaking the Maya Code”, which was made possible by a Soviet linguist who travelled from Russia to Guatemala in 1990. While there, he received a medal from Guatemala’s first civilian president, only to have modern Guatemala politics come to the fore when he received a death threat and had to depart from Guatemala in haste. Each article is preceded by insightful background information like this.

“Acts of Genocide: Commission for Historical Clarification” provides invaluable background to understand the longstanding racism within the country. The commission describes how the army defined entire Maya communities as “internal enemies”, so the annihilation of Maya populations was intentional, even though the military’s overarching motivation was officially to “defeat the insurgency”. I’d heard of such examples of ethnic cleansing, but didn’t appreciate the history behind it until reading some of these articles. Additional articles provide a real appreciation of the incredible influx of refugees to the U.S., which, according to Exodus, the Catholic Church estimated that a million people, or 15% of the population, were displaced during the violent period of the 1980s.

New sources of information made possible by the “Freedom of Information” act provide an additional appreciation of the CIA’s 1954 orchestrated coup that overthrew a democratic government, which led to the appalling violent period that lasted nearly four decades and included six hundred massacres in indigenous communities, a campaign the United Nations ruled to be genocidal. Such documents as the CIA’s “A Plan of Assassination” showed how they compiled lists of Guatemalans “to eliminate immediately in the event of a successful anti-communist coup.”

More contemporary problems, such as the influx of drugs and proliferation of gangs, are chronicled in “The Untouchable Narco-State”, in which the U.S. Embassy in Guatemala told the Associated Press that 75% of the cocaine that reached American soil passes through this Central American nation. Despite this very dismal reality, the Reader includes poems, songs, plays, jokes, novels, short stories, recipes, art, and photographs that capture the diversity of everyday life in Guatemala. The many maps and photos further strengthen the broad, diverse picture of Guatemala in all its physical beauty and human suffering.

The book is part of a Latin America series published by Duke University Press. The three editors of this Reader have exceptional backgrounds for this comprehensive undertaking. Greg Grandin is a Professor of History at New York University and a member of the American Academy of Arts and Sciences. He is the author of Fordlandia: The Rise and Fall of Henry Ford’s Forgotten Jungle City, a finalist for the Pulitzer Prize in History, and a truly exceptional book in its own right.

Deborah T. Levenson is an Associate Professor of History at Boston College and the author of Trade Unionists against Terror: Guatemala City, 1954–1985 and Adiós Niño: Political Violence and the Gangs of Guatemala City from Duke University Press, and Elizabeth Oglesby is an Associate Professor of Geography and Latin American Studies at the University of Arizona. She previously worked as the editor of Central America Report and the associate editor for NACLA Report on the Americas, which I used extensively when working on my Master’s degree.

This magnificent collage of pictures, stories and scholarly articles is not to be read in one sitting (well, it is over 600 pages) but I suggest the reader savor the book like a fine wine. In my case, I read an article, which is usually no more than three pages, each evening and have a far better appreciation of the incredible culture and historic complexities that make up “The Land of the Eternal Spring.”

Mark Walker (Guatemala 1971-1973) implemented fertilizer experiments in Guatemala and Honduras, although his most important accomplishment was a wife and three children, all born in Guatemala. Following an MA degree in Latin American Studies from the University of Texas in Austin, Mark co-founded a Guatemalan development agency and then managed child sponsorship programs for Plan International in Guatemala, Colombia and Sierra Leone. Mark has written and spoken in English and Spanish at a number of global conferences, including the Hemispheric Congress for Fundraising in Mexico, and has held senior fundraising positions for several groups like CARE International, MAP International, Make-A-Wish International and was the CEO of Hagar. Most recently, he completed a fundraising study for the National Peace Corps Association as a VP at Carlton & Co. His involvement promoting “World Community Service” programs led to receiving the most prestigious “Service Above Self” award from the Rotary International Foundation, and all three of his children would participate in Rotary’s “Youth Exchange” program. His own memoir, “Different Latitudes: My Life in the Peace Corps and Beyond” received “Honorable Mention” recognition in the Arizona Literary Award competition. Mark and his wife, Ligia, live in Scottsdale, Arizona close to their three children and six grandchildren.