“The Lost City of the Monkey God” by Douglas Preston
Reviewed by Mark D. Walker 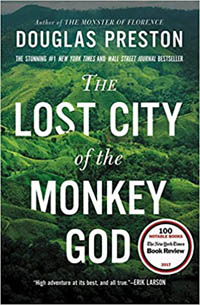 As soon as I opened this book, I realized it offered many of the things I enjoy most: a good travelogue, lots of adventure, a historic mystery, including flesh eating bacteria, all of which reveal who the population was centuries ago, as well as something about modern Honduras.

As a Returned Peace Corps Volunteer, I was pleased to learn that two Peace Corps Volunteers were instrumental in discovering an ancient ossuary, which would turn out to be the most important archaeological find since discovering Copan. In April 1994, Timothy Berg and Greg Cabe explored some caves on the Talgua River and, walking in a shallow stream, entered into one of the largest caves where, to their surprise, they ran across a ledge littered with pre-Columbian artifacts and eventually, something strangely elongated and “frosted like sugar candy, covered with glittering crystals of calcite.”

The discovery of an abandoned metropolis occurred almost eighteen year later in 2012, when the author joined a team of scientists and explorers climbing aboard a rickety plane, using space age technology known as LIDAR, was able to fly over the impenetrable mountains to access one of the last scientifically unexplored places on earth. This coincides with additional discoveries of over 60,000 new ruins in the Peten region of Guatemala using the same technology, which has totally rewritten the history books in regard to these ancient civilizations.

The author provides fascinating details of the many groups that preceded his expedition in search of lost treasure and the abandoned city. In the early 1990s Steve Morgan, a professional collector of legends and stories, teamed up with a German co-producer and correspondent, Steve Elkins. Elkins hired a local “fixer, Bruce Henicke, who was a combination gold prospector, drug smuggler, treasure hunter and archaeological looter who would handle the logistics to find the lost city. Henicke would deal with dangerous criminals as well as manage the Honduran bureaucracy necessary to shoot a film about their expedition.

Having spent time in the jungles of the Peten region in Guatemala, I could appreciate the author’s descriptions of the challenges of penetrating the Mosquitia in their canoes as one group glided into the “Heart of Darkness. The many hazards and forms of tropical diseases were graphically depicted as well as countless other hazards such as wild boars and the venomous fer-de-lance snake, as well as locals shrouded in mystique. The colorful photos in the middle of the book include a six foot long, decapitated viper.

Disease also played an important role in the demise of the civilization they found. After the ravages of smallpox swept the New World in the early 1500s, a measles pandemic would kill at least 25 percent of the affected population. The author cites one observer who claims that half the population of Honduras died from disease in the years from 1530-1532.

The consequences of disease would impact the exploration team even after they returned home. Some thirty different parasitic species were carried by several dozen kinds of sand flies in the project area, according to the author. Several of the team members were diagnosed with “leishmaniasis, the “second deadliest parasitic disease in the world, second only to malaria. They would be forced to take a really nasty medication whose after-effects could also be lethal. The author added to the drama by reporting that when a “mini-epidemic” began spreading among members of the expedition, accompanied by gruesome photos of weeping ulcers, the centuries-old legend of the “curse of the monkey god” seemed to be a reality.

The author tells of the controversy around the expedition as an American Archaeology reporter pointed out that one of the organizers had led filmmakers and celebrities to the sites in Mosquitia for years in search of a “Lost City” and referred to one of the organizers of this exhibit as the “Indiana Jones of archeology”. Interestingly, many of the objecting archeologists later weighed in on some of the things the expedition had found.

Shockingly, bones that were carbon-dated by the expedition were three thousand years old, and the burials had taken place over a period of a thousand years, making this site one of the oldest archeological sites in Central America. Also, the ossuary was the work of a sophisticated, socially stratified and artistically advanced culture, which developed before the Maya, so this was not just another extension of the Mayan ruins from Guatemala.

The author highlighted some of the modern realities of Honduras, such as corruption and the growing impact of the drug trade. The expedition came across landing fields in the middle of the jungle used to ship drugs to the north. In the 1990s an effective anti-drug policy in Colombia pushed much of the drug trade into Honduras. The murder rate soared, while law enforcement and judicial systems crumbled, adding just another layer of danger to the expedition. All these factors further complicated the search.

This book has been a New York Times bestseller, and Preston has written 30 other books including a number of bestselling thrillers co-written with Lincoln Child. In invoking Jared Diamond’s “Guns, Germs, and Steel”, the author ends the book with the mysterious, sudden demise of the Lost City. This book is packed with the power of realism and history unfolding, and is an important tale about archeology and the power of artifacts to determine who we are, as well as being a thriller.

As a Peace Corps Volunteer, reviewer Mark Walker implemented fertilizer experiments in Guatemala and Honduras, although his most important accomplishment was his marriage to his wife and three children, all born in Guatemala.

His involvement promoting “World Community Service” programs led to his receiving the most prestigious Service Above Self Award from the Rotary International Foundation, and all three of his children have participated in Rotary’s Youth Exchange program. His memoir, Different Latitudes: My Life in the Peace Corps and Beyond” won Honorable Mention in the Arizona Literary Award competition. He’s published various articles, including one in the summer issue of “Advancing Philanthropy.” Mark and his wife, Ligia, live in Scottsdale, Arizona close to their three children and seven grandchildren.