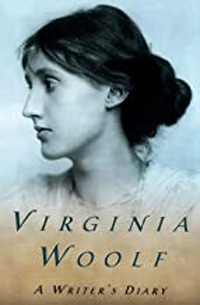 I knew that Virginia Woolf was one of the major literary figures of the twentieth century and understood that she’s transformed the art of the novel with her ground- breaking works of Mrs. Dalloway and To the Lighthouse. I’d soon learn that she was the author of numerous collections of letters, journals and short stories and an admired literary critic and master of the essay, so she was someone I needed to become familiar with.

I assumed that she was also the inspiration of Edward Albee’s play, “Who’s Afraid of Virginia Woolf,” played by Elizabeth Taylor in juxtaposition with Richard Burton in the film version. Although the play’s title alludes to the English novelist, the play has nothing to do with her, according to its author, who described the inspiration for the title as follows:

The diary was an excellent place to start the learning process, as it provides a guide to both the art and mind set of the author based on a collection of personal records her husband Leonard collected. The first entry is dated 1918 and the last, three weeks before her death in 1941.

She reveals much of her art as a writer, such as the importance of reading during the writing process, “I shall read the Trilogy and The Prime Minister on Friday morning. I shall read the Trilogy and some Sophocles and Euripides and a Plato dialogue; also the lives of Bentley and Jebb. At forty, I am beginning to learn the mechanism of my own brain—how to get the greatest amount of pleasure and work out of it. The secret is, I think, always so to contrive that work is pleasant.”

She finished one of her most popular books, Mrs. Dalloway, “without a break from illness, which is an exception; and written really in one year…without more than a few days’ break for writing journalism…” as opposed to another book, The Waves, which was, “…written at such high pressure that I can’t take it up and read it through between tea and dinner; I can only write it for about one hour, from 10 to 11:30. And the typing is almost the hardest part of the work. Heaven help me if all my little 80,000 word books are going in future to cost me two years!…”

The author’s philosophy of writing is best expressed in this passage, “I will not be “famous,” “great.” I will go on adventuring, changing, opening my mind and my eyes, refusing to be stamped and stereotyped. The thing is to free one’s self: to let it find its dimensions, not be impeded. And though this is usually only a pot shot, there is a great deal of substance in it….”

During a children’s party she attended, she reflected on the relationship between her writing and her personal life, “…And yet, oddly enough, I scarcely want children of my own now (she was 45 at the time). This insatiable desire to write something before I die, this ravaging sense of the shortness and feverishness of life, make me cling, like a man on a rock, to my one anchor. I don’t like the physicalness of having children of one’s own…”

She’d become known as a feminist and didn’t hold back her distain for some of the men she interacted with, as in this passage from one visit with a female friend, “The male atmosphere is disconcerting to me. Do they distrust one? Despise one and if so, why do they sit on the whole length of one’s visit?…I don’t knuckle under; I think what an abrupt precipice cleaves asunder the male intelligence, and how they pride themselves upon a point of view which much resembles stupidity…”

The author’s frustrations would almost lead to a nervous breakdown, “Oh, I’m so tired! I’ve written myself out over The Pargiters, I’ve had in mind ever so many months, but I can’t write it now. It’s the turn of the book. It needs a great shove to swing it round on its hinges. As usual, doubts rush in. I get it all the quick and thin, too surface bright? Well, I’m too jaded to crunch it up, if that’s so; and so shall bury it for a month…”

A year before her death she laments the passage of time,

The foot less prompt to meet the morning dew,

And hope, once crush’d, less quick to spring again.

Old age and the writer’s fatigue would be exacerbated by mental illness, which plagued the author throughout her life. She was institutionalized several times and attempted suicide twice. Her illness was considered to have been bipolar disorder, for which there was no effective treatment at the time and at age 59, she committed suicide by putting rocks in her coat pockets and drowning herself in the River Ouse.

This collection of writings reflect the ups and downs, anguish, the triumphs and creative vision of one of the great writers of our century and represent an inspiration and a reminder of the challenges of writing to successful as well as aspiring writers.