BOOK REVIEW OF, With Charity for All: Why Charities Are Failing and a Better Way to Give By Ken Stern
Reviewed by Mark D. Walker 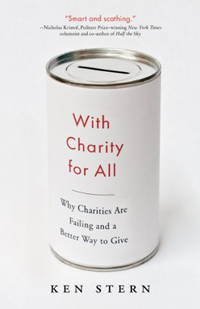 Former NPR CEO analyses the not for profit sector he knows so well. At the very beginning he states, “This book is not my story. This is a story about how the charitable sector lost its way.” The scope of the charitable sector the author critiques is immense and very complex–1.1 million organizations, 10% of the national workforce, and $1.5 trillion in annual revenues. The sector continues to grow and yet as the author contends, many Americans are totally unaware of what goes on which is why his analysis is so timely.

A fixation on “overhead” and often ignoring the measurement of results are two of the flaws he focuses on. The author contends that instead many groups focus on antidotes. He also provides insights into the exaggerated influence of the wealthiest donors which reached an extreme in the 1890’s when in New York 1% of the families claimed over 60% of the wealth a level of concentrated wealth not seen until the reaction of the great technological and financial fortunes of today. He claims that to a degree these wealthy donors are “pampered” and have undue influence on the organizations they support.

The author highlights the negative impact of this trend on the health industry where the uninsured were charged up to 140% more than insured patients and in some cases they only offered .5% of their free services for the poor. Their debt collectors of some of these charities became even more aggressive than the for profit sector. Other abuses would include the increasing salaries for the not for profit sector’s CEOs. Bowl Game charities were also highlighted since up to 10% of the proceeds went to the CEO.

The author laments the lack of oversight of the charitable community and claims that at the time he wrote this book, only thirteen States even practiced serious charitable oversight. Among the many negative cases he analyzes is the work of Madonna in Malawi and the misuse of funds my Christian Evangelist Benny Hinn who lives in a $10 million parsonage built by the Church. He also uses the nepotism and poor programming of Oklahoma’s largest charity at over $1 billion, “Feed the Children. According to the author, “The majority of funds were siphoned off by various service providers, especially marketers, long before the money ever went to pay for the cost of advertisements and fund-raising spots—making television stations, ad creators and advertising buyers the principal beneficiaries of the charity.” Despite these warning signs, the organization maintained its four-star rating from Charity Navigator and a “Charity Seal” from the better Business Bureau’s Wise Giving Alliance.

The author analyze several not- for-profit success stories like “VillageReach” which came out of one of the greatest technological company meltdowns in history,”Teledesic”. In Mozambique they’d introduce a low-cost and durable refrigeration system to the local clinics and set up a for-profit propane subsidiary, VidaGas to provide reliable energy supplies. They also introduced a comprehensive training plan for community reps to ensure that valuable medical supplies were effectively utilized.—their strength was mechanics, infrastructure, maintenance and repair. The organization extended its reach to India and seven sub-Sharan countries always focusing on last-mile challenges of health care. All three of the groups that the author studies are critical middlemen to the growth and maturation of an effective charitable sector. The contends that their success is the product of making the right investments in knowledge and people and of building a results-driven culture—that according to the author more than overhead or administrative ratio the author are the key to charitable success.

Finally, the author urges donors to avoid Charities that boast of exceptionally low overhead expenditures as they may be “managing” their books or shortchanging their potential. He provides the following down to earth recommendations:

⦁ Do the work of identifying the really effective charities.
⦁ Follow the monitoring leaders like GiveWell, New Profit and the Gates and Robin Hood Foundation which are committed to careful research and analysis.
⦁ Pool donations into Charitable “Mutual Funds” and allow professionals make the decisions similar to how Warren Buttett gave his billions to the Gates Foundation to manage.
⦁ Reinvent the government and the way it allocates recourses to the profit and not for profit sectors. This would include adequate funding for a new layer of organizations with the expertise “in evaluating charitable effectiveness.”
⦁ An accreditation process which would provide essential peer feedback to charities as they grow.

The author ends with a plea that for a system that distinguishes among charities, “can only emerge in a marketplace that values measurement.” He goes on to say that some resistance is inevitable to this vision from the charitable sector but “It promises a system that works for the innovators, the builders, and society as a whole.

The book is a treasure trove of insider information about the not for profit sector. Much of what the author says is as pertinent today as it was five years ago when he wrote the book. The author provides important insights into how the charitable community could become more effective in accomplishing its goals but should not be considered “gospel” as he is dealing with a massive economic sector with incredible diversity. In the end, he is asking donors to rethink the way they give and presents some important recommendations for change.

Mark Walker was a Peace Corps Volunteer in (Guatemala 1971–73), co-founded a Guatemalan development agency and then managed child sponsorship programs for Plan International in Guatemala, Colombia and Sierra Leone. He has held senior fundraising positions for several groups like CARE International, MAP International, Make-A-Wish International, and was the CEO of Hagar. His memoir, Different Latitudes: My Life in the Peace Corps and Beyond, was published by Peace Corps Writers in 2017 and was ranked 36th by Amazon for “Travel, Central America and Guatemala. Two of his articles were featured in Revue Magazine and several others in WorldView, Ragazine and in the “Crossing Class: The Invisible Wall” anthology by Wising Up Press. Mark’s wife and three children were born in Guatemala and now live in Scottsdale, Arizona.