Ghost Train to the Eastern Star: On the Tracks of the Great Railway Bazaar
By Paul Theroux
Reviewed by Mark D. Walker 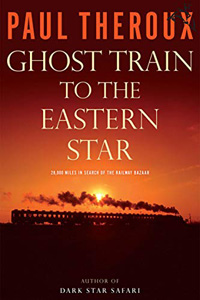 Follow Theroux as he embarks on a 25,000-mile epic journey through Asia retracing the steps of a trip he’d taken thirty years before. Since then, Theroux records phenomenal change. The Soviet Union has collapsed and China has risen; India grows, while Burma is mothered by a military dictatorship and, most interestingly, Vietnam flourished despite the havoc the United States had unleashed on it. No one describes the texture, sights, sounds and the flavors of this changing landscape better than Theroux.

Thirty years after the epic journey chronicled in his classic work, The Great Railway Bazaar, the world’s most acclaimed travel writer re-creates his 25,000-mile journey through eastern Europe, central Asia, and the Indian subcontinent, China, Japan, and Siberia. As always, Theroux avoids the easy routes, preferring to travel like the locals, by stifling trains, broken-down buses, illicit taxis and when necessary, by foot. His powers of observations and endless curiosity and instincts for what’s new and important never fail to inspire, enlighten, inform and, most definitely, entertain.

Along the way, the author shares pearls of wisdom about this moveable feast. Throughout the book he shares insights into what makes a true traveler. “Luxury spoils and infantilizes you and prevents you from knowing the world. This is its purpose, the reason why luxury cruises and great hotels are full of fatheads who, when they express an opinion, see as though they are from another planet…”

He reminds us that anxieties are simply part of real travel, “Thirty-three years before, I had been anxious. Where was I going? What would I do with the experience of travel? I was oppressed by the sense that the people I loved most disapproved of my going. “You’re abandoning us! I don’t want you to go. You’ll be sorry.”

He shares from the Tao of Travel, “that if one is loved and feels free and has gotten to know the world somewhat, travel is simpler and happier.” After a certain age, “the traveler stops looking for another life and takes nothing for granted.”

And finally, “Travel is at its most rewarding when it ceases to be about your reaching a destination and becomes indistinguishable from living your life.” Which seemed to be the case during this journey.

He shares some interesting conversations along the way with such literary luminaries as Nobel laureate Orhan Palmuk, who reflected on Theroux’s book about V.S. Naipaul, “Sir Vidia’s Shadow,” which he considered a very “affectionate book,” an assertion Theroux observes, “That’s true, but not many people saw it.”

“I don’t know. Maybe quarrels are more interesting. People said it was cruel. I’d say unsparing. The quarrelsome part of it was played up as a writers’ feud. But Naipaul was an important figure in my writing life.”

As is often the case, Theroux never stops researching the places he visits, such as the trip through Cambodia after the murderous Pol Pot regime, “This feeling wasn’t hindsight, though I learned later that a half dozen of the 167 torture prisons and killing centers of the Khmer Rouge regime were located along this route. The book that gave me this, and much more helpful information for understanding Cambodia, was Philip Short’s Pol Pot: Anatomy of Nightmare, which I bought and read after I got to Phnom Penh.”

He also made some comparisons to other parts of the world he was even more familiar with, “As in remote parts of Africa, the carrying of a talisman was useful for protection in Cambodia. A so-called passport mask – a small beaded object, a dried monkey’s paw, a lion’s tooth, or an elephant-hair bracelet might serve to defy the foul fiend in Africa. In Cambodia, the strongest talisman was a fetus that had been ripped whole from its mother’s womb and then killed and mummified…”

He brings a historic perspective to the most bizarre and despicable situations like his visit to one of the many torture prisons, “Like my visit to Dachau, it was a cruel example of inhumanity, of sadistic and pitiless murder.” “No other country has ever lost so great a proportion of its nationals in a single, politically inspired hecatomb,” Short wrote, “brought about by its own leaders.”

Perhaps the most interesting comparison the author made from his first trip thirty years earlier was of Vietnam, which he claimed had been “reborn.” “One of the greatest aspects of the new Vietnam was its compassion, its absence of ill will or recrimination. Blaming and complaining and looking for pity are regarded as weak traits in Vietnamese culture, revenge is wasteful. They won the war against us because they were tenacious, united, and resourceful, and that was also how they were building their economy. He goes on to say, “Yet war damage was visible all over the place: land mines littering the jungle, bomb craters, many amputees hobbling in the cities, and quietly dying in villages and hospitals, thousands of cancer victims who had been poisoned by the millions of gallons of Agent Orange we had sprayed on their trees and on them.”

And yet, “Saigon was one big bazaar of ruthless capitalism, of frenzied moneymaking, of beating us at our own game.” No doubt, “The Vietnam I had seen in 1973 did not exist anymore. And for most young people in the south, the war was not even a memory. One reason for this was that in all the years of war, from our first appearance as military advisers in 1961 until the fall of Saigon in 1975, we did not put up a single permanent structure. In fourteen years, and after the billions of dollars spent, the United States had not left behind one useful building. Apart from the land mines and bomb craters and amputees, it was as though we’d never been there. “

The author’s research includes the words of British historian J.M. Roberts, “By 1968, when there were half a million American soldiers fighting in Vietnam, a heavier tonnage of bombs had been dropped on North Vietnam than fell on Germany and Japan together in the entire Second World War.”

Theroux reflects on his incredible journey with, “It’s true that travel is the saddest of pleasures, the long-distance over-land blues. But I also thought what I’d keep fretting about throughout my trip, like a mantra of vexation building in my head, words I never wrote. Most people on earth are poor. Most places are blighted and nothing will stop the blight from getting worse. Travel gives you glimpses of the past and the future, your own and other peoples’…” And he ends with, “…Most people I’d met, in chance encounters, were strangers who helped me on my way. And we lucky ghosts can travel wherever we want. The going is still good, because arrivals are departures.”

Author of some forty books, this one helped build his reputation as the “Godfather of travel writing.” His books include The Mosquito Coast, which became a major film starring Harrison Ford, and his most recent book, Figures in a Landscape. He’s reportedly working on his next novel which takes place in Mexico. Can’t wait!

Mark Walker (Guatemala 1971–73) co-founded a Guatemalan development agency and then managed child sponsorship programs for Plan International in Guatemala, Colombia and Sierra Leone. He has held senior fundraising positions for several groups like CARE International, MAP International, Make-A-Wish International, and was the CEO of Hagar. Most recently, he completed a fundraising study for the National Peace Corps Association as a VP at Carlton & Co. His memoir, Different Latitudes: My Life in the Peace Corps and Beyond, was published by Peace Corps Writers in 2017 and is ranked 36th by Amazon for “Travel, Central America and Guatemala. His articles have been published in WorldView, Ragazine, the Revue Magazine and in the “Crossing Class: The Invisible Wall” anthology by Wising Up Press. Mark’s wife and three children were born in Guatemala and now live in Scottsdale, Arizona.