The Tao of Travel: Enlightenments from Lives on the Road
By Paul Theroux
Reviewed by Mark D. Walker 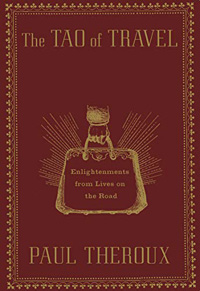 This book celebrates 50 years of travel writing and is just one of the reasons Theroux is known as the “Godfather of contemporary travel writing”. It’s an invaluable portal into the world of timeless travel on a global scale by one of the great travel authors. Theroux shares some of the books and authors who influenced and inspired him. He intersperses selections from his many books as well as those of the best travelers like Mark Twain, Charles Dickens, Graham Greene, James Baldwin and Ernest Hemingway.

I’d go a step beyond that description on the book’s back cover, “A Literary traveler’s handbook from one of our finest travel writers” and call it the “Bible for Travelers.” I obtained the bonded leather version which has “A New and Accurate Map of the World” on the inset of the front and back covers which was made in 1626. Some fellow travelers will find this read a virtual religious experience.

On the first page of the preface he presents the universality of the desire to travel, “The wish to travel seems to me characteristically human: the desire to move, to satisfy your curiosity or ease your fears, to change the circumstances of your life, to be a stranger, to make a friend, to experience an exotic landscape, to risk the unknown, to bear witness to the consequences, tragic or comic, of people possessed by the narcissism of minor differences…”

He goes on to say, “…if you’re afraid of loneliness, don’t travel. The literature of travel shows the effects of solitude, sometimes mournful, more often enriching, now and then unexpectedly spiritual.” He goes on to say, “As an adult traveling alone in remote and cut-off places, I learned a great deal about the world and myself: the strangeness, the joy, the liberation and truth of travel, the way loneliness—such a trial at home-is the condition of a traveler…”

Theroux sees travel from its purist state as presented in the “Old Patagonian Express, Travel is at its best a solitary enterprise: to see, to examine, to assess, you have to be alone and unencumbered. Other people can mislead you; they crowd your meandering impressions with their own… He uses a passage by Paul Bowles, “The Sheltering Sky” to further extrapolate, “He did not think of himself as a tourist; he was a traveler. The difference is partly one of time, he would explain. Whereas the tourist generally hurries back home at the end o f a few weeks or a months, the traveler, belonging no more to one place than to the next, moves slowly, over periods of years, from one part of the earth to the another.”

As a Returned Peace Corps Volunteer, his readers shouldn’t be surprised at this passage from “The Ghost Train to the Eastern Star”, Luxury is the enemy of observation, a costly indulgence that induces such a good feeling that you notice nothing. Luxury spoils and infantilizes you and prevents you from knowing the world…..one of the worst aspects of traveling with wealthy people, apart from the fact that the rich never listen, is that they constantly groused about the high cost of living—indeed, the right usually complained of being poor.

Latin American specialists will appreciate the passage from “The Old Patagonian Express” where he reveals, I had been in Latin America long enough to know that there was a class stigma attached to the trains. Only the semi-destitute, the limpers, the barefoot ones, the Indians, and the half-cracked yokels took the trains, r new anything about them. For this reason, it was a good introduction to the social miseries and scenic splendors of the continent.

Theroux reveals the circumstances behind the writing some of the great travel classics like this passage on Joseph Conrad in the Congo: Six months in 1890, including twenty-eight days on the Congo River. Eventually this one-month river trip (published after his death as “Congo Diary”, would form the basis of the brilliant and evocative novella “Heart of Darkness”, which he wrote eight years after returning from the Congo, describing it as “experience pushed a little (and only very little) beyond the actual facts on the case.”

And another great travel writer’s secrets are revealed in this passage on his travel in Liberia: “Twenty-three days. Green’s book “Journey Without Maps” (1936) is an ingeniously worked-up account of only a little over three weeks n the Liberian bust by an absolute beginner in Africa. Greene admits this early on: “I had never been out of Europe before; I was a complete amateur at travel in Africa.”

The author highlights a number of passages which reflect another important component of effective travel stories, An instance or two of ordeal is an element in most great travel books. That is, having a bad time sets such a book apart from the jolly travel romp, giving it a seriousness and depth; as a consequence we begin to understand the person traveling, the real nature of the writer of the book, tested to his or her limit. He includes William Burrough’s, “The Yage Letters” which were written in various jungles throughout Latin American in search of the ultimate psychedelic experience induced by the drug “ayahuasca.”

Theroux starts a chapter on “Dangerous Places” with a memorable passage from Albert Camus’s, “Notebooks, 1935-1942”, What gives value to travel is fear. It is the fact that, at a certain moment, when we are so far from our own country…we are seized by a vague fear, and the instinctive desire to go back to the protection of old habits. This is the most obvious benefit of travel. At the moment we are feverish but also porous, so that the slightest touch makes us quiver to the depths of our being. We come across a cascade of light, and there is eternity. This is why we should not say that we travel for pleasure. There is not pleasure in traveling.

Theroux ends his book with his “Five Epiphanies” and then what we’ve all been waiting for, “The Essential Tao of Travel”:

⦁ Leave home
⦁ Go alone
⦁ Travel light
⦁ Bring a map
⦁ Go by land
⦁ Walk across a national frontier
⦁ Keep a journal
⦁ Read a novel that has no relation to the place you’re in
⦁ If you must bring a cellphone, avoid using it
⦁ Make a friend

As a young Peace Corps Volunteer, I adhered to the “Tao of Travel” to the letter and as someone who has done a lot more international travel since then, I found the book a joy and a true celebration of the gift of travel. Theroux’s candor and his broad experience as a global traveler make this book a must read for any serious global trekker.