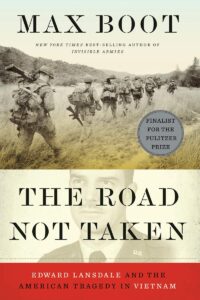 This book is not only a biography of a pivotal, yet interestingly unknown figure but a work of history with diplomatic, political, and military implications which force us to rethink our understanding of recent American history. With the endless wars continuing in Afghanistan, Iraq and Syria, this seemed like a good time to read a book which puts the Vietnamese war into a new perspective. A war which, according to the author, 2.7 million American troops had passed through, (500,000 troops by 1967), the conflict claimed the lives of 58,000 Americans and 3.6 million Vietnamese and when we left, it ended a thirty-year civil war between competing factions of Vietnamese over control of their country.

The pandemic offered the time and opportunity to take on a book of this size and scope (over 715 pages). Plus, several years ago I was able to actually visit Vietnam as the CEO of Hagar, which works with survivors of human trafficking, which stimulated my interest in learning more about the US legacy there. In the early 1970’s I took “The Road Less Traveled” and joined the Peace Corps, thus avoiding direct participation in the conflict.

Another reason I wanted to read it now is that it tells the life of covert operative, Edward Lansdale, who was the fictional model for Graham Green’s The Quiet American, one of my favorite authors. Interestingly, this book motivated two authors to create one of the characters in “The Ugly American” a copy of which John F. Kennedy sent to all members of Congress as it espoused many of the values of the Peace Corps. The book went through fifty-five printings in two years and directly resulted in the formation of the Peace Corps.

According to Greene, the two authors, Eugene Burdick and William Lederer actually misunderstood his story which depicted the American CIA agent, Alden Pyle, as being blinded to the realities and challenges in Vietnam due to his belief in “American Exceptionalism.” And “The Ugly American” would promote better trained, technically proficient staff focused on assisting developing countries which ironically, were the same qualities that blinded Alden Pyle.

Ironically, in November 2019, the BBC News listed The Quiet American on its list of 100 most influential novels. The novel generated two films, the original 1958 Hollywood film and the 2001 more true version to the book which screened the day before September 11 attacks and had to shelved for a year as it was considered, “unpatriotic” which reflects the interesting and controversial role these two books played on how Americans perceived our involvement in Vietnam and eventually the rest of the world.

The author brings the tragic complexity of Lansdale and the Vietnamese War including his nuanced approach to our foreign policy, which might of impacted how it eventually ended, with amazing detail. Lansdale pioneered a “hearts and minds” diplomacy first in the Philippines and then in Vietnam although eventually Landsdale’s vision would be overwhelmed by the U.S.’s formidable military bureaucracy, steered by elitist generals and blueblood diplomats and intellectuals like Maxwell Taylor, Walt Rostow, Robert McNamara, Henry Cabot Lodge and McGeorge Bundy.

Dozens of interviews and innumerable never before-seen documents recast what is a cautionary American story, tracing the gutsy rise to a crashing fall of the roguish “T.E. Lawrence of Asia” from the battle of Dien Bien Phu to the humiliating evacuation in 1975. Lansdale didn’t speak any foreign languages but impacted events in both the Philippines and eventually would be tapped to assassinate Fidel Castro. According to the author, “more than four decades after the conclusion of the Vietnam War, (Lansdale was) one of the most fascinating and mysterious, yet misunderstood figures in post-1945 American foreign policy.

According to George Anderson of the Washington Times,
“Edward Lansdale is probably the greatest cold warrior that most Americans have never heard of. Max Boot has written a fascinating account of how this California college humorist, frat boy and advertising executive evolved into a counterinsurgency expert before the term was even coined…. Max Boot has become one of the master chroniclers of American counterinsurgency efforts, and his biography of Mr. Lansdale is a tribute to a guy who recognized the threat of insurgency in a post-World War II environment where most American leaders saw only brute force as a solution to any political-military problem…. This book should be read in Baghdad and Kabul, not only by Americans, but by local leaders.”

The Author: Fifty-four photographs and three maps enhance the quality of the story. Max Boot is a military historian and foreign policy analyst who has been called “one of the world’s leading authorities on armed conflict. He is the author of innumerable books such as, “Invisible Armies: An Epic History of Guerrilla Warfare from Ancient Times to the Present Day.” His most recent book is The Corrosion of Conservatism: Why I Left the Right. He is a Senior Fellow at the Council on Foreign Relations, a columnist for the Washing Pose, and a global affairs analyst for CNN.

Reviewer Mark Walker:
Walker was a Peace Corps Volunteer in Guatemala and spent over forty years helping disadvantaged people in the developing world. He came to Phoenix as a Senior Director for Food for the Hungry, worked with other groups like Make-A-Wish International and was the CEO of Hagar USA, a Christian-based organization that supports survivors of human trafficking.

Several of his articles have been published in Ragazine and WorldView Magazines, Literary Yard, Literary Travelers and Quail BELL, while another appeared in “Crossing Class: The Invisible Wall” anthology published by Wising Up Press. His reviews have been published by Revue Magazine, as well as Peace Corps Worldwide, and he has his own column in the “Arizona Authors Association” newsletter, “The Million Mile Walker Review: What We’re Reading and Why.” One of his essays was a winner in the Arizona Authors Association literary competition 2020 while another essay was recognized by the Solas Literary Award for Best Travel Writing in 2020.

His honors include the “Service Above Self” award from Rotary International. He’s the membership chair for “Partnering for Peace” and a board member of “Advance Guatemala. His wife and three children were born in Guatemala. You can learn more at www.MillionMileWalker.com and follow him on Facebook at https://www.facebook.com/millionmilewalker/ and www.Guatemalastory.net

Posted in All, Book Reviews: Non-fiction and tagged The Quiet American, The Ugly America, Viet Nam.