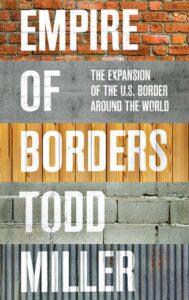 This book is timely as the U.S. continues to expand its military might to the level of the closest ten other countries in the world. Excellent investigative journalism reveals how the United States is outsourcing its border patrol abroad and essentially expanding its borders in the process.

Also, our President’s highly publicized focus on the “Wall” between the U.S. and Mexico is missing the bigger picture of strengthening border enforcement around the world. These borders have expanded thousands of miles outside our territory to encompass not only American land but Washington’s interests. Resources, training and agents from the U.S. are deployed to the Caribbean and Central America and, according to the author, go even farther afield enforcing division between Global South and North.

The story begins in my favorite place on earth, Guatemala, at a military base in the hot, dry town of Zacapa. Although the base is over 1,400 miles from the U.S. border, in a sense, it was the U.S. border, which is why the author was there. The military base, which is close to the Honduras border, is also located in the “drought corridor,” a long swath of territory that extended throughout Central America to Panama, which one climate scientist called “ground zero” for climate change in the Americas, and which will lead to unprecedented levels of migration, going hand in hand with an unprecedented thrust in border militarization around the world.

As the author enters the military base, one of the guards asks if he’s with “BORTAC” -the U.S. Border Patrol Special Forces and tactical unit that promotes swat-style operations in the U.S. borderlands and around the world. The size and scope of these operations had expanded from $287 million in 1978 to $23 billion in 2018, which is the combined Customs and Border protection with Immigrations and Customs Enforcement.

According to the author, borders like this were in a sense being “fortified against the poor, and made porous, or simply erased, for the wealthy and powerful. What might be called our global borders now extend not only to places like Guatemala and Mexico, but also across continents to the edges of the vast U.S. military-surveillance grid, into cyberspace and. via satellites and other spying systems, into space itself.

The author highlights the staggering scope of the problem this border patrol apparatus is trying to deal with, which will range from 150 million to 1 billion displaced people by 2050. Evidently, disasters are displacing “three to ten times more people than conflict and war worldwide,” according to the Norwegian Refugee Council.

Miller returned to Zacapa a second time in 2017 where he learned the massive scope of U.S. military presence of 800 bases in seventy territories and countries worldwide. “No other country’s military footprint comes close, as Britain, France and Russia combined have just thirty foreign bases.” One of the author’s sources goes on to say, “There isn’t a country on God’s earth that is not caught in the crosshairs of the U.S. cruise missile and the IMF checkbook.”

Miller traces the historic growth of the U.S. control of overseas territories to the annexation of Hawaii in 1898, and the formation of conduits for U.S. businesses like the United Fruit Company, which “became the twentieth-century symbol of U.S. imperials. It would evolve into a corporate octopus, controlling the livelihood of hundreds of thousands and toppling governments at will.” (Including a freely elected reform government in Guatemala in 1954.)

While in Guatemala, the author would connect with historian and former soldier, Justin Campbell, who defined the importance of “border sets.” He said that the border apparatus must be understood as a global regime, “reconfiguring before our eyes, a developing arsenal of the Global North sorting, classifying, and repelling or incarcerating people from the Global South, while employing countries of the Global South as enforcers.” The Middle East is an important part of this apparatus with its rich oil reserves where 80,000 U.S. military forces in numerous bases and off-shore sites lead to the U.S. constructing a “kind of informal American empire,” according to a former senior policy advisor for the U.S. Department of Defense.

I embrace the critique of this book by Greg Grandin, author of The End of the Myth: From the Frontier to the Border Wall in the Mind of America,

“An indispensable guide to our bunkered, barb-wired world. For more than a decade, well before Donald Trump landed in the White House, Miller’s reporting has revealed the conceits of globalization, documenting the slow, steady garrisoning of U.S. politics behind ever more brutal border policies. Now, with Empire of Borders, he looks outward, to a world overrun with so many border walls it looks more like a maze than a shared planet. If there’s a way out, Miller will find it.”

The table of contents reveals the global scope of this timely expose:

Twenty-first century battlefields —
The U.S. “border set” on the Guatemala-Honduras divide —
The global pacification industry on the Palestine-Mexico border —
“Selling a security state” —
Securing inequality on the U.S.- Mexico border —
Borders of empires, the colonial creation story —
Maps of empires —
The Caribbean frontier —
The Philippines and the periphery of empire —
Extreme vetting —
“We’ve got big brothers and sisters all over the place” —
The global caste system —
Armoring capitalism, “teaching the Mexicans how to fish” —
Armoring NAFTA —
“A return on our investments” —
Resistance and transformation on the U.S.- Middle East border —
The unholstered border —
The right to the world on the U.S.- Syria border —
The U.S.- African border in the Anthropocene : the case to dissolve borders —
“Shoring up the frontiers of fortress America” —
Negotiating borders on a warming planet —
The future : the airport and the ceiba in Copan

Todd Miller is the author of Border Patrol Nation and Storming the Wall, winner of the 2018 Izzy Award for investigative journalism. His writing has been published by the New York Times, TomDispatch, Mother Jones, the Nation, Al Jazeera English, and Salon.

Several of his articles have been published in Ragazine and WorldView Magazines, Literary Yard, Literary Travelers and Quail BELL, while another appeared in “Crossing Class: The Invisible Wall” anthology published by Wising Up Press.  His reviews have been published by Revue Magazine, as well as Peace Corps Worldwide, and he has his own column in the “Arizona Authors Association” newsletter, “The Million Mile Walker Review: What We’re Reading and Why.” One of his essays was a winner in the Arizona Authors Association literary competition 2020, while another essay was recognized by the Solas Literary Award for Best Travel Writing in 2020.

His honors include the “Service Above Self” award from Rotary International. He’s the      membership chair for “Partnering for Peace” and a board member of “Advance Guatemala.   His wife and three children were born in Guatemala. You can learn more at www.MillionMileWalker.com and follow him on Facebook at https://www.facebook.com/millionmilewalker/ and www.Guatemalastory.net