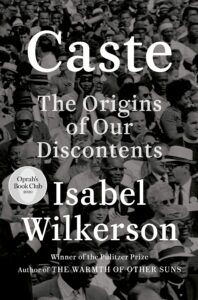 The lock down caused by COVID-19 has laid bare the growing inequalities and injustices in our social and economic systems today and yet offered a good opportunity to understand its foundations. As well as why so many white Americans seem willing to ignore the needs of their fellow citizens in order to maintain a system which benefits them so mightily, while ignoring and explaining away the suffering of others.

The public, excruciating murder of George Floyd sparked an awakening among many white people and our nation’s systemic racism and offered an opportunity to better appreciate its power and longevity of over 400 years on this continent. This Pulitzer Prize bestselling author examines the often unspoken caste system that has shaped America and shows how our lives are still impacted by a hierarchy of human divisions, which damage not only the Blacks at the bottom, but also the dominate the white population at the top of society today. And by understanding this insidious system, I fully agree with Albert Einstein, “If the majority knew of the root of this evil, then the road to its cure would not be long.”

The author clearly delineates that caste is “…an artificial construction, a fixed and embedded ranking of human value that sets the presumed supremacy of one group against the presumed inferiority of other groups on the basis of ancestry and often immutable traits..” And in the U.S., the author refers to a shapeshifting, unspoken, race-based caste pyramid, which justifies the dehumanization necessary to keep the lowest-ranked people at the bottom and to rationalize the protocols of enforcement…”

“American slavery, which lasted from 1619 to 1865, was not the slavery of ancient Greece or the illicit sex slavery of today. American slavery, by contrast, was legal and sanctioned by the state and a web of enforcers..” “For the first time in history, one category of humanity was ruled out of the “human race” and into a separate sub-group that was to remain enslaved for generations in perpetuity.”

The author broadens our perspective of caste by comparing systems in the U.S. with India and the Nazis in Germany. Of India and the U.S., “Their respective hierarchies are profoundly different. And yet, as if operating from the same instruction manual, translated to fit their distinctive cultures, both countries adopted similar methods of maintaining rigid lines of demarcation and protocols. Both countries kept their dominant caste separate, apart and above those deemed lower….”

The author goes on to say, “…the caste lines in America may have at one time been even starker than those of India. In 1890, “85 percent of black men and 96% of black women were employed in just two occupational categories, agriculture and domestic or personal service.  And forty years later, only 5% were listed as white-collar workers—many of them ministers, teachers and small business owners…”

Dehumanization was a basic aspect of U.S. and Nazi caste systems. “Both Jews and African-Americans were subjected to gruesome medical experimentation at the hands of the dominant-caste physicians. “We know about the experiments of SS doctors, but well into the twentieth century in the U.S., “doctors used African-Americans as a supply chain for experimentation, as subjects deprived of either consent or anesthesia, injecting plutonium while not treating diseases like syphilis.”

And according to the German press agency, when the Nazis were solidifying their grip on the country, “For us Germans, it is especially important to know and see how one of the biggest states on the world with Nordic stock already has race legislation, which is quite comparable to that of the German Reich.”

Yet more recently, “In Germany, displaying the swastika is a crime punishable by up to three years in prison. In the United States, the rebel flag is incorporated into the official state flag of Mississippi. It can be seen on the backs of pickup trucks north and south, fluttering along highways in Georgia and the other former Confederate states…”  The author goes on to point out that, “In Germany, restitution has rightly been paid, and continues to be paid, to survivors of the Holocaust. In America, it was the slaveholders who got restitution, not the people whose lives and wages were stolen from them for twelve generations.” Narcissism plays a role in promoting the caste system on an individual and country level.  It’s “a complex condition of self-aggrandizing entitlement and disregard of others, growing out of a hollow insecurity. In 1964, at the height of the civil rights movement in the US, social theorist Eric Fromm said that, “the racial narcissism which existed in Hitler’s Germany, … is found in the American South.”

The author sums up the evils of caste as, “…more than rank, it is a state of mind that holds everyone captive, the dominant imprisoned in an illusion of their own entitlement, the subordinate trapped in the purgatory of someone else’s definition of who they are and who they should be.”

The Epilogue of the book offers some sobering final thoughts, such as the 2016 study which found that, “if disparities in wealth were to continue at the current pace, it would take black families 228 years to amass the wealth that white families now have, and Latino families another 84 years to reach parity.”  “Caste is a disease, and none of us is immune. It is as if alcoholism is encoded into the country’s DNA and can never be declared fully cured. It is like a cancer that goes into remission, only to return when the immune system of the body politic is weakened…”

“Wilkerson’s book is a powerful, illuminating and heartfelt account of how hierarchy reproduces itself, as well as a call to action for the difficult work of undoing it.”—The Washington Post

The man in the crowd —
Part one: Toxins in the permafrost and heat rising all around. The afterlife of pathogens; An old house and an infrared light; An American untouchable —
Part two: The arbitrary construction of human divisions. A long-running play and emergence of caste in America; “The Container We Have Built for You”; The measure of humanity; Through the fog of Delhi to the parallels in India and America; The Nazis and the acceleration of caste; The Evil of Silence —
Part three: The eight pillars of caste. The foundations of caste: Pillar number one: Divine will and the laws of nature; Pillar number two: Heritability; Pillar number three: Endogamy and the control of marriage and mating; Pillar number four: Purity versus pollution; Pillar number five: Occupational hierarchy: The Jatis and the Mudsill; Pillar number six: Dehumanization and stigma; Pillar number seven: Terror as enforcement, cruelty as a means of control; Pillar number eight: Inherent superiority versus inherent inferiority —
Part four: The tentacles of caste. Central miscasting; Dominant group status threat and the precarity of the highest rung; A scapegoat to beat the sins of the world; The insecure Alpha and the purpose of an underdog; The intrusion of caste in everyday life; The urgent necessity of a bottom rung; Last place anxiety: Packed in a flooding basement; On the early front lines of caste; Satchel Paige and the illogic of caste —
Part five: The consequences of caste. The Euphoria of Hate; The inevitable narcissism of caste; The German girl with the dark, wavy hair; The Stockholm Syndrome and the survival of the subordinate caste; Shock troops on the borders of hierarchy; Cortisol, telomeres and the lethality of caste —
Part six: Backlash. A change in the script; Turning point and the resurgence of caste; The symbols of caste; Democracy on the ballot; The price we pay for a caste system –

Isabel Wilkerson is the winner of the Pulitzer Prize and the National Humanities Medal. Her debut work, “The Warmth of Other Suns,” won the National Book Critics Circle Award for Nonfiction and was named to “Time’s 10 Best Nonfiction Books of the 2010s. She taught at Princeton, Emory and Boston universities and has lectured in more than two hundred other universities in the U.S., Europe and Asia.