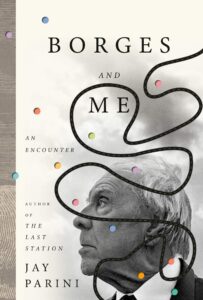 This seemed the perfect time to read a story that took place in the early 1970s, when Jay Parini arrived at the oldest university in Scotland in flight from his draft board in the U.S., which had designs on sending him to Vietnam. I had just published an article about my flight from my draft board that same period, “Crested Butte 1970: Reflections on a Town in Transition.”  My flight would be to Guatemala with the Peace Corps, but I also had ties to St. Andrews Scotland where Parini had escaped. My wife and I visited my mother’s cousin and her husband in Perth, less than an hour from St. Andrews, which perches on the North Sea. I wrote about our trek through the highlands of Scotland in my book, “Different Latitudes.”

I also have a great appreciation of Latin American writers, so when the author’s friend and mentor, Alastair Reid, asked Parini if he could play host for a visiting Latin American writer who turned out to be the blind, aged and eccentric iconic Argentine author, Jorge Luis Borges, I was ready to read. The author knew nothing about him, and I kept wanting to jump into the story to tell Parini, “check him out on Wikipedia so you appreciate what an incredible opportunity for a poet this chance encounter is!”  But, alas, the story was more complex and enjoyable than that.

What ensued was a seriocomic romp across the Scottish landscape that Borges insisted he must “see,” all the while declaiming and reciting from the literary encyclopedia that was his head, and Jay Parini’s eventual reckoning with career and the continued badgering of his draft board.

The author describes the pressure and circumstances many young men in the U.S. felt as the Vietnam War loomed as a possible destination:

“In 1970, having just graduated from Lafayette College and moved (briefly, I hoped) back in with my parents in Scranton, Pennsylvania, I saw two choices: stay at home, where my mother would chop off my balls, or go to Vietnam, where they’d be blown off by a landmine. A third choice, less apparent at first, but finally obvious, was to leave the United States altogether, getting as far away as possible. The place that called to me was a small town on the East Neuk of Fife, in Scotland.”

Since Parini had no idea what an influential literary figure Borges was, his descriptions of him were not always complimentary – “How on earth had I landed in bed with an elderly, loquacious blind man in a remote village in the Scottish Highlands? This man in his ridiculous yellow satin pajamas, with a smell of sour sweat, piss, and unfamiliar lotions?”

The author asks about my favorite author, the Chilean Pablo Neruda, who according to Borges, “…I bought a volume of poems by Pablo once, long ago, in a used bookstore in Madrid. I thought of the book as an orphanage, and would regularly visit the pale, hungry guests there, these captives of its covers. But their father was a fool. He praised Stalin. Stalin? He disliked the United States, your country. I refuse to dislike your country, however much it disappoints me.”

To which the author responds, “I’m certainly disappointed.”

A visit with Borges to a famous Scottish battlefield reminded the author of the plight of his best friend, Billy, and the ongoing war in Vietnam, “…The battlefield saddened me when I thought of Billy in the jungle near the DMZ and remembered his last letter, with the badly wounded or even dead soldiers lying on stretchers. I thought about the hopeless, frantic work of medics, and Billy’s efforts to radio for help.  Was there ever a more foolish or cruel war? All the dead young men, on both sides, depressed me. What was the point?”

When Borges realized the emotional burden on the author caused by the endless letters sent from the author’s draft board, he suggested a solution, “…We must incinerate them,” said Borges. “Ashes to ashes, no? This is the only solution. I think from the Book of Genesis. The origin of all stories.

As soon as Borges said this, I felt the wisdom—even the necessity—of his proposal. I must burn the letters as a kind of benediction for Billy, as an elegy for my younger self. It felt as right as anything had felt since my arrival in St. Andrews.”

The “Afterword” puts this story into perspective and brought some closure. “This narrative lived in memory for fifty years, its contours enhanced or distorted in the usual ways by time and retelling. I’ve told these stories countless times—my wife recall one of our first dates, in the late seventies when I talked at length about Borges, Alastair, Jasper and Jeff. She seemed especially to like ‘the night of the pissing,’ as I referred to our stop in Killiecrankie. It was fun when, shortly thereafter, she met Alastair, who amplified my stories, filling in parts I had missed.

Alastair remained a beloved member of our family until his death in 2014. And it wouldn’t be a stretch to say that I miss his company every day of my life.”

The book ends with these words, “There is a line in Roethk’s “The Far Field” that I think nicely frames the nature of Borges and Me: “The pure serene of memory in one man.”

Michael Greenberg of The New York Times Book Review says, “This reminiscence by Parini, who is now a prolific novelist, biographer and poet, brings Borges more sharply to life than any account I’ve read or heard. . .In this sense, the memoir is an important contribution to the biography of a major writer. .For readers who already admire Borges, this memoir will be a delicious treat. For those who have yet to read him, Parini provides the perfect entry point to a writer who altered the way many think of literature.”

The Publishers Weekly adds, “A tender bond forms between the eccentric sage and his caretaker. Fans of both Borges and Parini will delight in this touching coming-of-age memoir.

Jay Parini is Axinn Professor of English at Middlebury College, Vermont. His six novels also include Benjamin’s Crossing and The Apprentice Lover. His volumes of poetry include The Art of Subtraction: New and Selected Poems. In addition to biographies of John Steinbeck, Robert Frost and William Faulkner, he has written a volume of essays on literature and politics, as well as The Art of Teaching. He edited the Oxford Encyclopedia of American Literature and writes regularly for the Guardian and other publications.

Mark Walker was a Peace Corps Volunteer in Guatemala and spent over forty years helping disadvantaged people in the developing world. He came to Phoenix as a Senior Director for Food for the Hungry, worked with other groups like Make-A-Wish International and was the CEO of Hagar USA, a Christian-based organization that supports survivors of human trafficking. He’s presently the producer of a documentary film, “Guatemala: Trouble in the Highlands.”

Several of his articles have been published in Ragazine and WorldView Magazines, Literary Yard, Literary Travelers and Quail BELL.  His reviews have been published in the Midwest Book Review, by Revue Magazine, as well as Peace Corps Worldwide, and he has his own column in the “Arizona Authors Association” newsletter, “The Million Mile Walker Review: What We’re Reading and Why.” One of his essays was a winner in the Arizona Authors Association literary competition 2020 and was reissued in “Revue Magazine.” Another article was recognized in the “Solas Literary Awards for Best Travel Writing.”