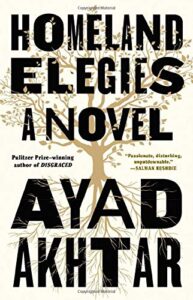 I initially heard Ayad Akhtar when he was interviewed by PBS and then came across the words of Bill Moyers about one of the author’s many plays on what was to be Moyers’ last; his plays are “not only history, but prophecy. A Biblical-like account of who’s running America, and how.” Moyers added: “Our times at last have found their voice, and it belongs to a Pakistani American: Ayad Akhtar.” This novel about identity and belonging in a nation coming apart at the seams, told from the perspective of a Muslim writer, is a must read. The book reflects the power of fiction to explore and understand what’s going on in reality and includes a powerful social commentary. Not surprisingly, Alison Bechdel’s quote is on the page just before the first chapter, “I can only make things up about things that have already happened…”

The author blends fact and fiction to tell an epic story of longing and dispossession in the world that 9/11 made. Part family drama, part picaresque novel, part social essay at its heart, it is the story of a father, a son, and the country they both call their home.

The author forges a narrative voice to capture a country in which debt has ruined countless lives and the gods of finance rule, where immigrants live in fear, and where the nation’s unhealed wounds impact the rest of the world. Akhtar’s story unfolds within one family and moves from a heartland town in America to palatial suites in Central Europe to guerrilla lookouts in the mountains of Afghanistan. In the process, he spares no one — least of all himself.

The author shares some of that social commentary and historic backdrop in the initial segment, the “Overture to America.” The author tells about the resistance to Professor Mary Moroni, “a scholar of staggering erudition…” for her comments that, “…America had begun as a colony and that a colony it remained, that is, a place still defined by its plunder, where enrichment was paramount and civil order always an afterthought…”

He goes on with, “Love for America and a firm belief in its supremacy—moral and otherwise –was creed in our home, one my mother knew not to challenge even if she didn’t quite share it.” His mother “…was put off that everyone always asked where she was from and never seemed bothered that they had no idea what she was talking about when she told them. Americans were ignorant not only of geography but of history, too….”

The author didn’t see the limitations his mother was aware of, “…until our private lives had consumed the public space” and “…the very movements of our minds transformed into streams of unceasing revenue for someone, somewhere. I wouldn’t see it clearly until the American Self had fully mastered the plunder, idealized and legislated the splitting of the spoils and brought to near completion the wholesale pillage not only of the so-called colony – how provincial a locution that seems now!-but also of the very word itself.”

In this story, the author’s father was the doctor to Donald Trump “My father, like Trump, binged on debt in the ‘80s and ended the decade uncertain about his financial future….” “Separated from his wife, he’d decamped from the family triplex for a small apartment on a lower floor of Trump tower. He was spending hours each day lying in bed, staring up at the ceiling. He wouldn’t leave the building, not for meetings, not for meals – subsisting on a diet of burgers and fries delivered from a local deli. Like his debt load, Trump’s waistline ballooned; his hair grew long, curling at the ends, ungovernable…”

A dialogue between the author and his father in a small restaurant in Waukesha about Trump’s comments during the 2016 election provided a good sense of the divide facing our country, after Trump entered the race with the remarks about Mexican immigrants being rapists and murderers. “I don’t know what you’re so worked up about. He’s a showman. He’s drawing attention. He doesn’t really mean it.” “Then he shouldn’t say it?” “You’re not a politician.” “Neither is he. “That remains to be s to be seen.” You’re not telling me you think this is a good idea.” To which Father didn’t respond, only gestured at the busboys in their Mexican football team jerseys, “Anyway, these people need to learn English.”

Trump’s proposal for a Muslim database, for which, oddly, the author’s father didn’t believe he would have to register, reflects another generational disconnect “I don’t pray. I don’t fast. I’m basically not Muslim. You’re the same – he’s not talking about us. And anyway, I was his doctor, so we don’t have anything to worry about.”

The book ends with an emotional response of the author when an older white man who attends one of the classes he’s lecturing asks, “I mean, if you don’t like it here, I don’t really understand why you don’t just leave…”  To which the author responds, “I’m here because I was born and raised here. This is where I’ve lived my whole life. For better, for worse – and it’s always a bit of both – I don’t want to be anywhere else. I’ve never even thought about it. America is my home.”

Hari Kunxra of the New York Times Book Review said, “[A] moving and confrontational novel . . .  Homeland Elegies deals in ambiguities that were beyond the pale of public discourse in the years after 9/11. . . . He has an unerring sense for the sore spots, the bitter truths that have emerged from this history.”

Ayad Akhtar is an American-born playwright, novelist, and screenwriter of Pakistani heritage who received the 2013 Pulitzer Prize for Drama. His work has received two Tony Award nominations for Best Play and an Award in Literature from the American Academy of Arts and Letters. Akhtar’s writing covers various themes including the American-Muslim experience, religion and economics, immigration, and identity. In 2015, The Economist wrote that Akhtar’s tales of assimilation “are as essential today as the work of Saul Bellow, James Farrell, and Vladimir Nabokov were in the 20th century in capturing the drama of the immigrant experience.” His third play, “The Invisible Hand,” premiered in December 2014, a production, which invited comparison to the work of Shaw, Brecht, and Arthur Miller.

Among other honors, Akhtar is the recipient of the Steinberg Playwrighting Award, the Nestroy Award, and the Erwin Piscator Award, as well as fellowships from the American Academy in Rome, MacDowell, the Sundance Institute, and Yaddo, where he serves as a Board Director. Additionally, Ayad is a Board Trustee at PEN/America and New York Theatre Workshop.  He lives in New York City.

Walker was a Peace Corps volunteer in Guatemala and spent over forty years helping disadvantaged people in the developing world. His memoir, Different Latitudes: My Life in the Peace Corps and Beyond, was recognized by the Arizona Literary Association for Non-Fiction. More than 25 of his articles were published in literary magazines, including one that received Honorable Mention from the Solas Literary Award for the Best Travel Writing, 2020, while another was an essay winner for the “Arizona Authors Association” 2020 Annual Literary Awards competition. He’s a contributing author to “Revue Magazine” and has a column in the “Arizona Authors’ Association Newsletter,” which includes some of his 60 book reviews. Walker is also producing a documentary on immigration in Guatemala. His next book is tentatively entitled, The Moritz Thomsen Reader: His Books, His Letters and His Legacy Told by the Writers Who Knew Him Best. He founded Million Mile Walker LLC in 2016. His wife and three children were born in Guatemala. You can check out his website for a look at this works, including several videos, at www.MillionMileWalker.com