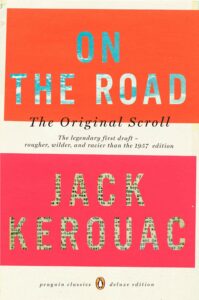 After writing several “counter culture” articles on my experiences in the early 1970s, the first entitled, “Crested Butte 1970: Reflections of a Town in Transition,” I decided it was time to re-read perhaps the most influential beat generation book, “On the Road.” This book is now ranked number two on Amazon’s “Beat Generation Criticism” list, after “Dharma Bums” by the same author.

The New York Times hailed the book as “the most beautifully executed, the clearest and the most important utterance yet made by the generation Kerouac named years ago as “beat.” In 1998, the Modern Library ranked On the Road 55th on its list of the 100 best English-language novels of the 20th Century.

English academic and novelist, Dr. Howard Cunnell, who edited the original scroll, observes, “…On the Road is the key document in the history of one of the most enduringly popular and influential novels published in the last fifty years, and among the most significant, celebrated, and provocative artifacts in contemporary American literary history.” With this, his second book, Kerouac “transforms himself from a promising young novelist into the most successfully experimental writer of his generation…” Cunnell observes that it would take a full-length book to do justice to the amount of writing Kerouac produced between 1948 and 1951 as he worked on his second novel. “Writing most often late into the night, he filled notebooks, journals, hundreds of manuscript pages, and letters, as well as conversations, with ideas for it…”

Then in three weeks in April of 1951, Kerouac wrote his first full draft of On the Road – typed as a single-spaced paragraph on eight long sheets of tracing paper, which he taped together to form a 120-foot scroll. This time I decided on the legendary first draft, which is rougher, wilder and racier than the 1957 edition. And he used the real names of the protagonists living life of the postwar Beat and Counterculture generations against a backdrop of jazz, poetry, and drug use. The main figures include such luminaries as William S. Burroughs, Allen Ginsberg, and Neal Cassady, as well as Kerouac as the narrator. “Sal Paradise” was published by Viking Press in 1957. This review is based on the “Penguin Classics Deluxe edition” published in 2008, which contains material that was excised from the original draft due to its explicit nature.

On the Road has influenced various poets, writers, actors and musicians, including Bob Dylan, Van Morrison, Jim Morrison, Jerry Garcia, Hunter S. Thompson and David Bower. Bob Dylan would say, “It changed my life like it changed everyone else’s,” according to Sean O’Hagan’s article in the Guardian.  O’Hagan went on to say, “It would be hard to imagine Hunter S. Thompson’s road novel, Fear and Loathing in Las Vegas, had “On the Road” not laid down the template; likewise, films such as Easy Rider, Paris Texas and even Thelma and Louise were inspired by Kerouac’s work.”

Music, especially jazz, would play an important part in Kerouac’s stories; he even establishes the time period with references to the musical world. “At this time, 1947, bop was going like mad all over America. Jazz was seen as the ultimate safeguard against co-option. Thelonious Monk said, “We’re going to create something they can’t steal because they can’t play it.” In Penny Vlagopoulos’s essay, “Rewriting America: Kerouac’s Nation of ‘Underground Monsters’, an essay at the beginning of this Penguin classic edition,  she observes that “Kerouac seemed to be grasping to know America in a way that would encode a hidden editing process, a way that would recuperate the losses and failures inherent in the very structures of our language. In early 1950, after spending an evening listening to a number of jazz greats, including Dizzy Gillespie and Miles Davis, he understood that an “art that expresses the mind of mind, and not the mind of life (the idea of mortal life), is dead art.:…”

Allen Ginsberg, the Beat Generation poet, appears throughout the book, in this case with poetry under his arm, “…and sat in an easy chair watching us with beady eyes. For the first half hour, he refused to say anything, or that is, he refused to commit himself. He had quieted down since the Denver Doldrum days; the Dakar Doldrums had done it. In Dakar (West Africa), wearing a beard, he had wandered the back streets with little children who led him to a witch doctor who told him his fortune. He had snapshots of crazy streets with grass huts, the hip back-end of Dakar. He said he almost jumped off the ship like Hart Crane on the way back…”

Kerouac’s travels would not always be happy ones, “…I spent my last dime on a cheap meal in Detroit skid row. I called up my wife’s father’s new wife and she wouldn’t even see me. My whole wretched life swam before my weary eyes, and I realized no matter what you do it’s bound to be a waste of time in the end so you might as well go mad. All I wanted was to drown my soul in my wife’s soul and reach her through the tangle of shrouds which is flesh in bed…”

The book ends with poetic speculation about one of his traveling partners, “..So in America when the sun goes down and I sit on the old broken down river pier watching the long, long skies over New Jersey and sense all the raw land that rolls in one unbelievable huge bulge over the West Coast, all that road going, all the people dreaming in the immensity of it.  And in Iowa, I know by now the evening star must be dropping and, shedding her sparkler, dims on the prairie, which is just before the coming of complete night that blesses the earth, darkens all rivers, cups the peaks in the West and folds the last and final shore in, and nobody, just nobody knows what’s going to happen to anybody besides the forlorn rags of growing old, I think of Neal Cassady; I even think of Old Neal Cassady, the father we never found, I think of Neal Cassady, I think of Neal Cassady.”

“The publication of this ‘bible’ provides scholars and beat junkies alike with access to the source, the novel as Kerouac meant it to be….The scroll’s language is raw, fast-paced, and jazzy, an exuberant organic word blast unembellished with the self-conscious literary asides of the published book.” –Regina Weinreich, The Washington Post.

Jack Kerouac (1922-1969), the central figure of the Beat Generation, was born in Lowell, Massachusetts, in 1922 and died in St. Petersburg, Florida, in 1969. Among his many novels are On the Road, The Dharma Bums, Big Sur, and Visions of Cody.

Walker was a Peace Corps Volunteer in Guatemala and spent over forty years helping disadvantaged people in the developing world. His memoir, Different Latitudes: My Life in the Peace Corps and Beyond, was recognized by the Arizona Literary Association for Non-Fiction. More than 25 of his articles were published in literary magazines, including one that received Honorable Mention from the Solas Literary Award for the Best Travel Writing, 2020, while another was an essay winner for the “Arizona Authors Association” 2020 Annual Literary Awards competition. He’s a contributing author to “Revue Magazine” and has a column in the “Arizona Authors’ Association Newsletter,” which includes some of his 60 book reviews. Walker is also producing a documentary on immigration in Guatemala. His next book is tentatively entitled, The Moritz Thomsen Reader: His Books, His Letters and His Legacy Told by the Writers Who Knew Him Best. He founded Million Mile Walker LLC in 2016. His wife and three children were born in Guatemala.