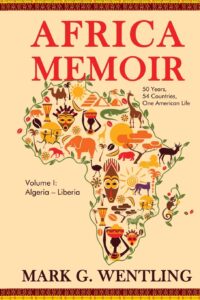 I’ve read and reviewed several of the author’s books over the years. We were both Peace Corps Volunteers in Central America and worked in West Africa, although Wentling went on to work and travel in 54 African countries over the years. My favorite book from his “African Trilogy” is “Africa’s Embrace,” which is fiction, but reflects his experience working as a Peace Corps Volunteer in West Africa in the 1970s. The well-developed characters force the reader deep into the heart of Africa. Wentling worked with USAID and the State Department, so his book, “Dead Cow Road,” is an authentic and compelling work of historical fiction that focuses on the U.S. response to Somalia’s 1992 famine. Somalia is one of the most challenging, and often violent, countries in which to work in Africa, so this was a riveting tale.

This is the first book of a series about Africa and Volume I encompasses Algeria to Liberia. The author says that he grew up in Kansas, but was “made” in Africa. His half century of work and living throughout the African continent provides a unique perspective on Africa and its diverse population. He describes his first-hand experiences and enlightening impressions, as he speculates on the prospects of some of the countries he knows best. He expresses his passion for Africa early on, “…all I write is based on a half-century of doing almost nothing except dreaming, thinking, reading, writing about, and working in Africa. In a nutshell…living Africa day and night for a lifetime.”

The author provides a unique overview of the continent, although my so doing, he often provides impressions based on a brief stay from the airport to an office/hotel and back. Over the years, the author has shared his experiences in Africa with his countrymen and has discovered that, “…many Americans think of the continent of Africa as one country. I used to give a talk to schools and charitable organizations in the U.S. entitled, “Africa is Not a Country.”  He goes on to state that it has 1.2 billion people and is experiencing the world’s highest urbanization and population growth rates. “Africa also has a youthful population structure, with fifty percent of its people below the age of nineteen. Yet, it generally has the oldest leaders in the world.” I was surprised to learn that Nigeria is the most densely populated country in Africa and “will have more people than the U.S. in 2050, when it will be the third most populated country in the world.”

I always read about the countries I have worked in or traveled to, although I’ll have to wait until the third volume to see what the author says about my favorite country, Sierra Leone. The author’s presentation on the country to the South, Liberia, is fascinating although the author doesn’t hold back on what he thinks of the U.S.’s foreign policies. He was in Liberia in 1985 when violence was breaking out and “watched the loss of its assets and the demise of a country it (the U.S.) had helped create and supported for over 130 years. The inaction on the part of the U.S. Government resulted in not only the destruction of Liberia, but also the loss of hundreds of thousands of lives. The U.S. government had the opportunity to save a country and its people, but declined to do so. Where is the honor in such inaction? If we cannot be a reliable partner in Liberia, why should any country in Africa rely on the U.S. government for assistance?”

Many Liberians were forced to flee the country, resulting in a large population living abroad and providing an important source of remittances. “On a percentage of GDP basis, Liberia has the highest rate of remittances in SSA. Perhaps, one-third of Liberia’s annual GDP is composed of remittances….” this large funding stream points to the important role the diaspora from an African country can play in the development of their home country.”

As ambitious as this series is, it might not be the author’s last hurrah. In an interview at the end of the book, he says that at age 75, “I should retire and take it easy. But there are more books hammering at the inside of my skull, begging me to write more words that will result in their creation…”

The author became a Peace Corps Volunteer in Honduras. In 1970, he obtained a degree from Wichita State University and continued as a PCV in Togo. He served as a Peace Corps Director in Gabon and Niger.

He began working for the U.S. Agency for International Development (USAID) in Niger, Guinea, Togo, Benin, Angola, Somalia and Tanzania. After retiring from the U.S. Senior Foreign Service, he continued to work with USAID Missions in Zambia, Malawi, Guinea and Senegal.

He went on to work for CARE, World Vision and Plan International in Niger, Mozambique, and Burkina Faso. His book, “Dead Cow Road,” was recognized by the Peace Corps Writers group with the Maria Thomas fiction award in 2018. He works and lives in Lubbock, Texas but continues to travel extensively in Africa. He designed a course in International Development for Texas Tech University.

Mark Walker was a Peace Corps Volunteer in Guatemala and spent over forty years helping disadvantaged people in the developing world. His memoir, Different Latitudes: My Life in the Peace Corps and Beyond, was recognized by the Arizona Literary Association for Non-Fiction. More than 25 of his articles have been published in literary magazines, including one that received Honorable Mention from the Solas Literary Award for the Best Travel Writing, 2020, while another was an essay winner for the “Arizona Authors Association” 2020 Annual Literary Awards competition. He’s a contributing author to “Revue Magazine” and has a column in the “Arizona Authors’ Association Newsletter,” which includes some of his 60 book reviews. Walker is also producing a documentary on immigration in Guatemala. His next book is tentatively entitled, The Moritz Thomsen Reader: His Books, His Letters and His Legacy Told by the Writers Who Knew Him Best. He founded Million Mile Walker LLC in 2016.  His wife and three children were born in Guatemala You can find him at www.MillionMileWalker.com.