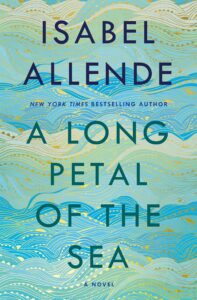 I hadn’t read any of Allende’s books since “House of Spirits,” and after seeing several revealing interviews of her over the last few months, I decided it was time to reacquaint myself with her latest novel. The setting of the Spanish Civil War and Chile drew me in even more, as many of my favorite authors, such as Federico Garcia Lorca, George Orwell, John Dos Passos, Ernest Hemingway and Pablo Neruda lived through that war.

Also intriguing was the landing of the protagonists in Chile after the military takeover of Pinochet. The President who was toppled was the author’s uncle, Salvador Allende, and I was in Chile just after it happened in the early 70s. Plus, my favorite Chilean author, Pablo Neruda, would play a key role in the story, as he financed the boat bringing a group of refugees from France to Chile.

I was not disappointed. This epic tale begins in the late 1930s when General Franco and his fascists overthrow the government, forcing hundreds of thousands to flee into France; tens of thousands would lose their lives. Among the refugees was Roser, a pregnant young widow who escapes with Victor Dalmau, an army doctor and the brother of her deceased lover. In order to survive, they must unite in marriage. They would be amongst the 2,200 who board the Winnipeg, a ship chartered by poet Pablo Neruda, and escape to Chile.

The author uses Neruda’s poems to begin a number of chapters like this one, which relates to the brutal conditions Roser and Victor find in a concentration camp in France:

And may the nightly bonfire recall

The Light of the deceased stars

Neruda would even inspire the name of the book in this scene where the refugees depart France to the unknown, “…None of them knew anything about Chile. Years later, Neruda was to define it as a “long petal of sea and wine and snow… with a belt of black and white foam, but that would have left the migrants none the wiser. On the map, it looked slender and remote.”

Another of Neruda’s poems introduces a chapter about Victor’s affection for a lover, which I used to begin one of the chapters of my book “Different Latitudes,” as well:

If little by little you stop loving me,

If suddenly you forget me

Don’t come looking for me,

I’ll already have forgotten you”

From the The Captain’s Verses

The author provides insider information when describing the chilling aftermath of the brutal military coup the aftermath, “…They said Salvador Allende had committed suicide in the palace, although Victor suspected they had killed him as they had so many others. It was only then that he understood how grave the situation was. There would be no going back.”

Government ministers were arrested, Congress was declared in permanent recess, political parties were banned, press freedom and citizen’s rights were suspended until further notice…To avoid being murdered by his own comrades in arms, the former commander-in-chief fled to Argentina, but a year later a bomb was put in his car and he died, blown to pieces, together with his wife.”

One riveting scene takes place in the infamous stadium where Victor was taken prisoner, as told by a metalworker arrested two days after the coup, “Don’t attract attention. Stay still and silent—they can use any excuse to beat you to death with their rifles. They’re wild animals.”

“So much hatred, so much cruelty…I don’t understand,” Victor mumbled. His mouth was dry, and the words stuck in his throat.

“We can all turn into savages if we’re given a rifle and an order,” said another prisoner who had come over to them.

Towards the end of the story, Victor is living alone in a very isolated rural community after the death of his wife, but is reunited with his estranged daughter, and in the last scene, “It seemed to Victor he was listening to Roser in her final moments, reminding him that we human beings are gregarious, we’re not programmed for solitude, but to give and receive. That was why she insisted he mustn’t withdraw into old age, and even chose him a new partner. He suddenly thought tenderly of Miche, the kindhearted neighbor who gave him the cat, brought him tomatoes and herbs from her garden, the tiny woman who sculpted fat nymphs…

According to Publishers Weekly, “Majestic . . . both timeless and perfectly timed for today . . . Allende’s assured prose vividly evokes her fictional characters [and] historical figures . . . seamlessly juxtaposing exile with homecoming, otherness with belonging, and tyranny with freedom.”

“Allende . . . has deftly woven fact and fiction, history and memory, to create one of the most richly imagined portrayals of the Spanish Civil War to date, and one of the strongest and most affecting works in her long career.” —The New York Times Book Review

Born in Peru and raised in Chile, Isabel Allende is the author of a number of bestselling and critically acclaimed books, including The House of the Spirits, Of Love and Shadows, Eva Luna, Paula, and In the Midst of Winter. Her books have been translated into more than forty-two languages and have sold more than seventy-four million copies worldwide. She lives in California.