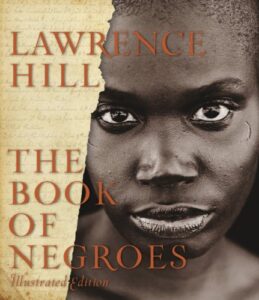 My middle daughter gifted me this book, which remained next to my bed for over five months due to its imposing size and more than 500 pages. But I decided to check it out as part of my “Black Lives Matter” awareness program. What was slavery about and how had it impacted the U. S. for so long? In this case, Aminata Diallo would be taken from her village in West Africa and placed on a slave ship in Sierra Leone – where I’d worked for three years. The ship was bound for South Carolina and from there she’d escape to New York City and most amazingly, manage to return to Sierra Leone.

The original book was 150 pages long, created by Brigadier General Samuel Birch it records the names and descriptions of 3,000 Black Loyalists, enslaved Americans who managed to escape to British lines during the American Revolution and evacuated to Nova Scotia, Canada as free people of color. And some managed to migrate to Sierra Leone where they settled Freetown, under the auspices of the Sierra Leone Company. They were among the original ancestors of the Krio ethnic group. Krio is the lingua franca in a country divided by innumerable tribes and languages.

The author takes you with Aminata Diallo from a West African village to an indigo plantation in South Carolina, through the tough streets of New York City where slave owners are constantly looking to recapture runaway slaves, and from there to the harsh climate of Nova Scotia in northern Canada, then to the tropical coast of Sierra Leone, and finally to an abolitionist’s home in London.

The protagonist describes the conditions of the slave ships; as an adult, she comes across one of them in Sierra Leone, “…The approaching ship has also prepared for the meeting: all captives have been sent below decks. The true nature of the ship could not be disguised, however, because the stink made us choke and gag. I knew exactly how the captives were chained in the bell of the ship, and I could imagine the running sores on their legs and the moans leading from their lips…”

Once she was old enough to have children herself, she confides in her friend, Georgia, about the realities of childbirth on a plantation,

And once she did have her first child….”But when my son, Mamadu, was just ten months old, I woke up in the middle of the night to his bawling…The crying was outside my little room now. Out there in the night. I jumped up, dizzy, confused and full like an unmilked cow, and there I saw Robinson Appleby put my baby into a man’s arms up on a carriage. I ran toward them. The driver whipped a horse and the carriage pulled forward. The whip struck again and the carriage sped away. And my baby disappeared into the darkness as fast as a falling star. I ran to Appleby, beating my hands on his chest. I slapped and hit until he threw me down. “Bring back my baby!” I shouted. He laughed in my face. “Bring him back!”

“Too late. He’s sold. Only got me five pounds, but he’s a buck, and he’ll grow and make his new master a fine profit one day….”

Tragically, Aminata loses her husband when his ship sinks and on the trip to freedom to Nova Scotia, she would be separated from her daughter who is being cared for by a white couple she worked for who treated them well. But when she fled in an attempt to gain freedom, she lost touch with this couple who still has her daughter. Her daughter eventually leaves the couple in search for her mother, who she finds in London where Aminata now lived in order to help abolitionists, including the most famous, William Wilberforce. Aminata was well-known in London after testifying in front of the British Parliament about the evils of slavery.

In 1807, the British Parliament passed legislation to abolish the slave trade and in the United States, abolition of the slave trade took effect in 1808. It would take another fifty-seven years before the Thirteenth Amendment of the U.S. Constitution officially abolished slavery in 1865.

This particular edition included 150 images, including early maps and documents, archival photos, period paintings and published pages from the original handwritten ledger from which the novel draws its name. Canadian Director Clement Virgo adapted the book into a six-hour mini-series, which premiered in 2015 starring Cuba Gooding and Louis Gossett Jr., among others.

The Globe and Mail states, “A masterpiece, daring and impressive in its geographic, historical and human reach.”

The Author: Lawrence Hill is the author of the novels “Someone Knows My Name,” “Any Known Blood” and “Some Great Thing” as well as the nonfiction work “The Deserter’s Tale” (with Joshua Key). He won the Commonwealth Writers’ Prize for Best Overall Book, and the CBC Canada Reads award.  He lives in Ontario, Canada.