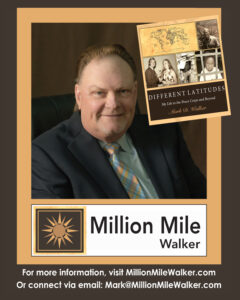 Friends and Colleagues from Around the World,

2020 and the beginning of this year were prone to ecological breakdown. Simultaneous climate disasters have roared, including the worst wildfire season in the history of California, record heat here in Arizona, record hurricanes coupled with drought in Guatemala and, most recently, the deep freeze and resulting infrastructural and leadership breakdowns in Texas, all of which will be the focus of Culture Watch, My Writing & Book Reviews, and will include several book reviews and a movie review.  We’ll look to inspiration in Voices of the Day and, as always, What Others Are Saying and an updated Calendar.

My latest article, “The Future of the Peace Corps and Guatemala” was published in this month’s Revue Magazine where I’m a contributing writer and it was reissued by the Peace Corps Worldwide. http://www.revuemag.com/2021/02/the-future-of-the-peace-corps-in-guatemala/. Both sites have a comment section, so let them know what you think about this story.

The article on the Peace Corps in Guatemala includes information on the impact of several hurricanes on the agricultural population. And yet, many Americans have a difficult time appreciating the impact of climate change from the suburban comfort of their homes, which is why I recommend checking out the issue of “Worldview Magazine” that tells Peace Corps Volunteer stories from all over the world on how local populations are being affected; in particular, “Islands in Peril: Climate Change in the Pacific,” by Returned Peace Corps Volunteer and founder of the Chesapeake Climate Action Network, Mike Tidwell, who asks the question, “What happens, for example, if unchecked global warming wipes entire Pacific Island nations off the map in the coming years?…” Page 18: https://flickread.com/edition/html/5e6a493ece1dc#1. This publication includes stories of climatic destruction in Fiji, Tonga, The Marshall Islands, and Kiribati.

This interactive map reflects the global vulnerability of climate change around the world. No one will be unaffected, although the poorest communities will suffer the most—https://www.nytimes.com/interactive/2021/01/28/opinion/climate-change-risks-by-country.html?action=click&module=Opinion&pgtype=Homepage

One article from The Sierra Club, “Toward the Desert,” by Jessica Camille Aguirre tells how this climate change is forcing families from Guatemala to abandon their land and head north—one of the main focuses of our documentary, “Trouble in the Highlands.” In Central America, Climate Change Is Driving Families North | Sierra Club

Consecutive hurricanes, combined with a growing “drought corridor,” are forcing farmers off their land due to crop damage and loss. Two of the Guatemalan migrants I met in Phoenix as part of a support program from the Guatemalan Consul told me they’d left their land in Huehuetenango, on the Mexican border, due to drought that devastated their crops and left them with no seed to grow their next crop.
Here in Arizona, we can expect even hotter summers in the future, which means temperature reaching 120 degrees in the shade. https://www.azcentral.com/story/news/local/arizona-weather/2021/01/29/2020-was-2nd-hottest-2nd-driest-year-ever-recorded-for-arizona/4301588001/

Last year, California suffered unprecedented wildfire destruction and this year Texas has suffered the mother of all debacles as the wealthiest oil/gas economy in the country lost power for five days due to freezing temperature causing untold suffering by their population—then they lost access to clean water, and many suffered food shortages. The article is aptly called, “Where Post-Truth Politics Meets Energy Policy,” by Nobel Memorial Prize in Economics Sciences winner, Paul Krugman. So far, we’ve learned that the State leadership ignored Federal recommendations to winterize their electric infrastructure; they disconnected from the broader grid with other states, and the group that oversees their energy program is composed of board members who don’t even live in the State.
https://www.nytimes.com/2021/02/18/opinion/texas-storm-power.html?surface=most-popular&fellback=false&req_id=237043295&algo=top_conversion&variant=3_top_conversion_daysback_4&imp_id=583445552&action=click&module=Most%20Popular&pgtype=Homepage

As the debacle unfolded in Texas, with families burning furniture to keep warm, or sleeping their cars and unable to find clean water to bathe in or drink, Governor Abbott claimed that the problem was related to their Green, Clean Energy program, which accounted for only 7% of the electric generation.  This claim was immediately debunked by Snopes, among other fake news researchers. The Electric Reliability Council of Texas (ERCOT) laid the blame on an “overdependence on natural gas.”

So instead of telling Texans the truth, the governor plays the blame game and then instead of dealing with the problem, another key leader, Senator Cruz, heads to the warmer climes of Cancun and then does a photo op the day after he returns, handing out water to suffering families….and their suffering would only be compounded by outrageous energy bills exceeding $7,000, in some cases due to a lack of price controls in the energy industry, making this both a natural and an unnatural disaster.

Considering so many examples of devastation caused by climate change, I often wonder why so many deny a global phenomenon, which has been studied and documented for over ten years now. And then I came across one of the reasons in “Mother Jones” magazine, “Exxon Mobil, the world’s largest oil company, knew global warming was real as early as 1981—but has spent more than $30 million since then funding think tanks and research to promote climate denial.” Congressman Joaquin Castro wasn’t fooled, though, blaming the disaster on “people who are married to fossil fuels; some of whom are climate deniers. And that’s made it very tough to modernize our systems.” Finally, the best reporting on misinformation from Fox News on the subject was provided by none other than John Oliver, and it’s hilarious to boot!  https://www.thedailybeast.com/john-oliver-has-had-it-with-tucker-carlsons-texas-crisis-lies 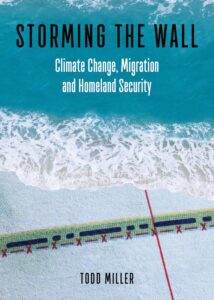 This book caught my attention, as the author connects climate change and the hostility toward refugees, which is a key theme I focus on in a documentary on immigration in Central America. Although much debate on the existence of climate change that I’m exposed to takes place among relatively well-to-do urban dwellers, the author points out that 48 of the “least developed countries” are five times more likely to die in a climate-related disaster than the rest of world. Floods are now impacting 21 million people worldwide annually. http://millionmilewalker.com/2021/02/storming-the-wall-climate-change-migration-and-homeland-security-by-todd-miller/ 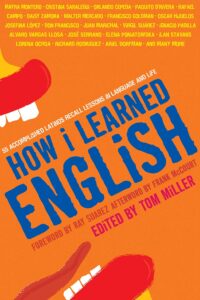 My next book has a cross-border feel to it, but more from a literary/linguistic perspective. I purchased this book as a Christmas present for my Guatemalan wife because, she like millions of other Latinos, has struggled to master the quirks and challenges of English. Ligia took English in school in Guatemala. But I’ve always insisted we speak Spanish in order to maintain my fluency and she patiently corrected my grammar, which she continues to do.  After our first year of marriage, I took her to my hometown of Evergreen, Colorado in the dead (cold) of winter, where she tried to communicate with my mother by writing notes. But my mother insisted that we get a job so Ligia could talk to her—in English, of course. I obtained a job managing low-income housing in the Denver area and Ligia had to answer the phone and show apartments, which greatly accelerated her ability to speak English. And that’s not half the story—I also know the author who has written a number of fabulous books like “Panama Hat Trail” and “Revenge of the Saguaro.”http://millionmilewalker.com/2021/02/how-i-learned-english-by-tom-miller-reviewed-by-mark-d-walker/

My next article coming out soon:

Voices of the Day
If we do not save the environment and save the Earth, then whatever we do in civil rights or in a war against poverty will be of no meaning, because then we will have the equality of extinction.

– James L. Farmer
The way to right wrongs is to turn the light of truth upon them.

What Others Are Saying About Us
Mark, I am quite impressed with your latest missive. I popped into your piece immediately after reading “Gone But Not Forgotten,” by Jonathan Kirshner, in the March-April 2021 Foreign Affairs magazine. Patrick O’Leary, fellow Returned Peace Corps Volunteer author.

Hi Mark….always enjoy your news and, like some of your other fans, am amazed at the breadth of your cover. Attached see FREEDOM (a poem), which I wrote at 0200, the night after January 6th.   Warren Salinger, fellow author

You can find all 60 book reviews and 25 articles plus several videos at www.MillionMileWalker.com “Follow” me on Twitter. https://twitter.com/millionmile_wal  and Facebook http://www.facebook.com/millionmilewalker/?modal=invite_friend for the latest on international affairs and literature. And, as always, if you’ve read “Different Latitudes: My Life in the Peace Corps and Beyond,” by all means, rate it on Amazon, Barnes & Noble and GoodReads, or if you don’t have it, please consider purchasing it.