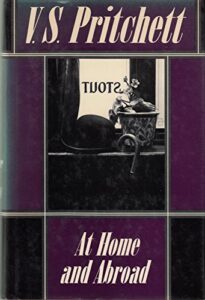 While perusing my books recently, I recognized this book by V.S. Pritchett, who is a British writer and literary critic and a well-known travel writer. I’d recently written several of my own stories on Latin America, “The Ying & Yang of Travel: Traveling Solo,” and “Tschiffley’s Epic Equestrian Ride,” so I decided to get this author’s take. After all, according to the “WorldCat List,” which is the largest data- base on books for libraries around the world, Pritchett had logged 422 works in 1,896 publications in 5 languages in almost 43,000 library holdings. And he was knighted of Sir Victor Pritchett.

Sir Victor chose to fly from country to country, as opposed to my approach of riding buses or in the back of trucks and Paul Theroux’s preference for railroad travel on “The Old Patagonia Express.” According to the author, who made this trip in 1956, “For anyone who lives by eye and ear, as I do, to use them in the exotic South American scene is a major pleasure of life. In the months I was there, I flew a good ten thousand miles, saw men and women at their most primitive and most civilized, crossed from sea to sea, from mountain to jungle. Mine was quite literally, a flying visit; but the impressions of the flying visit are sharp and indelible.”

He was inspired by an editor in London who told him, “If I were a young man, I would pack up and go to South America for life. That is the continent of the future.” He wanted to observe how the nation creating civilizations of Spain and Portugal had been transplanted. How America and the Indian and Negro races they mixed with had changed them. And, “I believe in differences, and I have tried to set out how the Colombian differs from the Peruvian, the Chilean from the Argentine, the Argentine from the Uruguayan, and the remarkable Brazilians from all…”

Upon arrival in Ecuador he observes, “The Indians are in the streets, the Indians are in the art. There is a cult of the Indians. But they are still serfs on the huge estates where the Friesian-Holsteins gaze in the lovely Andean valleys.” He goes on to say that, “Quito is the most Spanish-looking city in South America, and architecturally the richest…”

In Peru, he flies to Cuzco and the Inca ruins of Machu Picchu, “Those implacable walls of the Incas, beautiful in their mortarless, ingenious interlocking, became foundations on which the Spanish manors and cloisters, the Spanish arcades and green and brown balconies, the rich Spanish churches, have been built…” And he adds to the ambience with, “But at the top of the street we do not hear the Spanish goat bells.  Instead, there is a group of long-necked llamas heavy with their wool, looking at us de haut en bas with a disdain one had never noticed in duchesses. The Inca stone blocks are a timeless and simple geometry, one of the fundamental inventions of the human race…”

His comparisons between the countries he visits is insightful, “Once again you see how irreconcilably the South American states differ. Peru is courtly; Bolivia is barbaric. In Chile, the Spanish spirit has been diluted: central Chile has the classical grace of the Mediterranean; southern Chile, of the lakes, with its cool and rainy climate and its blossoms hung against the snow mountains, suggests a Japanese print, or again, because of its plantations of firs, some part of Germany or Scandinavia; in the extreme south the cold and harshness of the uninhabitable country are Antarctic…I have heard the Chileans called the English of South America…” He refers to Uruguay as “little Sweden” for cultural and political reasons. “Montevideo is the least American of modern South American cities. It is very Germanic. It even goes in for small British and German motorcars.”

He describes the tropical fruits and beverages of Brazil as follows, “The Brazilian picks out his mango and smells it first, as if he were pausing to accept or reject the bouquet of a wine, making sure it has just the right, faint exhalation of the curious turpentine-like fragrance. In tropical countries, the scents and savor of the fruits are a refined pleasure of the senses. They like wines in their vintages; indeed, the fruit of South America is really the wine of the country and the juices offered at the stalls belong to a world of natural soft drinks that is closed to palates hardened by alcohol. For myself, though I cannot drink the sweet Guarana, which is consumed all over Brazil, I find the dry Guarana sold in the Amazon delicious. Most of the whiskey in South America, by the way, is a swindle, the gin deserves only to be drowned, the lager beer is excellent and the various vodka-like fire waters are for desperation.”

He sums up the future of the continent at the end of trip as follows, “We have plunged into a life whose values are often basically distinct from our own, and which is awake and creative. What, we must ask, will this continent become when it is fully opened and its huge natural resources used? All travelers in South America are staggered by its wealth and its prospects. They are overcome by its beauty. We have had the incredible luck to see a continent at the moment of its awakening.”

From South America, the author continues his travels through Portugal. -Down the Seine. -Guideless in the Pyrenees. -Journey in Greece. -Irish character. -Americans in my mind. -London. -Thames River of history and the Appalachian Mountains. As a foreigner, he provides the reader with a unique take on the essence of the Appalachians, “North Carolina is proud. Proud of having less than 1 percent of foreign blood in its stock. Proud of its pure Scottish, Irish and English blood. There you hear a strange dialect, not an acquired twang, but a traditional, custom-hewn brogue, something which hovers naively between a Devonshire accent and the Oxford manner…”

He even goes on to describe this unique dialect, “Nat Pearcy is my name. Yessir. I didn’t catch yours. Oh, yes. Why, right smart of them folk living in Gap Creek over Cloudland. There’s Ned, and Doc, and Tom, and Commodore. Would you-uns be like kin to them? Well, no, I guess not, because you-uns comes over the waters. Whaur did you-uns come from? Are you married? So am I. Well, well!…”

I must agree with Eudora Welty of the New York Times Book Review when she says, “He is one of the great pleasure-givers in our language.”

This from an obituary written by P.N. Furbank of the Independent:

For surprisingly many years V. S. Pritchett (Sir Victor Pritchett) was the best short-story writer and, equally, the best impressionistic literary critic in Britain. He was also the author of a very distinguished travel book, The Spanish Temper (1954), five estimable novels, and a memorable two-volume autobiography (A Cab at the Door, 1968; and Midnight Oil, 1971). But the fact that his reputation was always high and suffered no great fluctuations tended to obscure the real distinction and importance of his achievement.

As a short-story writer, Pritchett attached a very high value to the “ordinary.” He was occasionally said to cherish eccentrics, but this was a mistake, as he himself remarked. He was not interested in prodigies and monsters and was not driven by obsession, or at least on the scale of a Balzac or Dickens. What interested him was ordinary people, that is to say, unique people, and the temporary or momentary relationships and bizarre conjunctures into which life has a way of thrusting them.