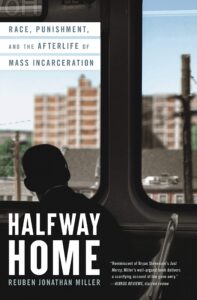 One of the stories often hidden from public view with tremendous consequences is the astonishing size of our country’s incarcerated population at 2.3 million while another 20 million live with a felony record. That does not include the 555,000 locked up in the U.S. who have not been convicted of a crime. I heard an interview of the author and decided this book would be a good place to dig into this grave reality.

Reuben Miller knows the issues from first-hand experience. He was a chaplain at the Cook County Jail in Chicago and is now a sociologist studying the issue, interviewing prisoners, ex-prisoners, their friends, and their families to understand the lifelong burden that even a single arrest can entail. His study exposes the false narrative that in the U.S. you can serve your sentence, and after paying your debt, you can return to life as a full-fledged member of society. The author’s stories reveal the obstacles faced by released individuals, such as jobs that are off limits, apartments that cannot be occupied and votes which cannot be cast. If you didn’t know that the American justice system is not created to rehabilitate, it will become clear after you read this book. Parole is structured to keep classes of Americans impoverished, unstable, and disenfranchised long after they’ve paid their debt to society.

An astounding 95% of the cases in our judicial system end in a plea only after someone has spent anywhere from several weeks to years in a cage. The author writes that 40% are black, 84% are poor, and half have no income at all, resulting in a system not resembling justice, but which “manages the nation’s problemed populations.” The conviction of the former governor of Illinois, Rod Blagojevich, who was sent to a federal prison for trying to sell former President Barack Obama’s vacant senate seat, only to be granted clemency in the third year of the Trump presidency is an example. So the author follows James Baldwin’s advice, “go to the unprotected—those, precisely, who need the law’s protection most! -and listen to their testimony…” ‘Ask the wretched how they fare in the halls of justice…’”

But the onus of the American justice system doesn’t stop at the prison doors. “Forty-five thousand federal and state laws regulate the lives of the accused. They dictate where and with whom they may live and what they may to with their days. The greatest harms are concentrated at the state level, reaching into their neighborhoods.”

Children are impacted by this system, as on any given day, “there are forty-eight thousand incarcerated children living in the United States…,” but sadder still is the number of children torn from their families, “The people I met lost children, and they lost them for so many reasons: A missed appointment, A social worker came by the house, and the landlord hadn’t exterminated in months. Someone had an addiction. Someone had a gun. Some had one too many convictions. In the end, their children were taken, and there was nothing they could do.”

The author sums up the situation succinctly, “The problem of mass incarceration has never really been about crime.  It’s that the people who Americans are afraid of are subject to a separate set of rules…No social-service agency, no matter how well funded, can bridge the divide between these two worlds, nor can any of our criminal justice-policy reforms. …You cannot treat or arrest or, perhaps, even reform your way out of mass incarceration because mass incarceration is about citizenship, not criminal behavior, and citizenship is about belonging.”  This is a poignant and eye-opening call to arms that reveals how laws, rules, and regulations extract a tangible cost not only from those working to rebuild their lives, but also our democracy. I can’t help but agree with the author that America must acknowledge and value the lives of its formerly imprisoned citizens. The National Book Review sums up the value of this book as, “Through vivid stories and evidence of this afterlife…Miller describes “a new kind of prison” …in heartbreaking prose. “

Reuben Jonathan Miller is a sociologist, criminologist and a social worker who teaches at the University of Chicago in the School of Social Service Administration where he studies and writes about race, democracy, and the social life of the city. He has been a member at the Institute for Advanced Study in Princeton New Jersey, a fellow at the New America Foundation and the Rockefeller Foundation, and a visiting scholar at the University of Texas at Austin and Dartmouth College. A native son of Chicago, he lives with his wife and children on the city’s Southside.
Product details