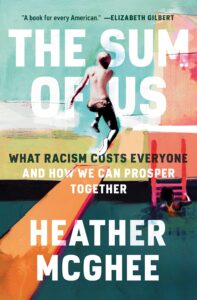 I initially came across this book after listening to several interviews with the author and realized that her focus on how racism affects all Americans was consistent with what we’ve learned about the consequences of the COVID pandemic, where the majority of developing countries are unable to access the vaccine, despite none of us being safe until everyone is vaccinated.  And the consequences of ignoring the plight of so many Central Americans forced to flee their homes to head north in search of safety and a decent quality of life.

The author embarks on a deeply personal journey across the country from Maine to Mississippi to California, analyzing what we lose as a country when we buy into the zero-sum paradigm—the idea that progress for some of us must come at the expense of others. Interestingly, she meets white people who confide in her about losing their homes, their dreams, and their shot at better jobs to the toxic mix of American racism and greed.

Race would play a central role in the rise from a starving colony to a superpower. The economy depended on systems of exploitation, which, in 1860, resulted in four million human beings in a slave trade with a market value of $3 billion, which benefited white colonizers and slaveholders. This, according to the author, made it easier to sell the idea that the inverse was also true: that liberation for people of color would necessarily require taking something away from white people.  Indigenous groups would fare even worse, as an estimated 56 million lives, or 90 percent of all the land’s original inhabitants were lost, either through war or disease.

The consequences of the institutions and systems established to maintain this  social order have consequences today. President James Madison created the Electoral College as a compromise to the slave states, which had won a Three-fifths Compromise in the Constitution, giving them added power in Congress based on a fraction of the nonvoting Black population. Consequently, an Electoral College built to protect slavery has sent two recent candidates to the White House, George W. Bush and Donald Trump, despite having lost the popular vote.

The author uses the events of the 1950s and 1960s to illustrate the impact of the zero-sum paradigm when white officials in communities across the country opted to drain their public swimming pools rather than integrate them. Instead of promoting a higher standard of living for everyone, the author points out that the United States is near the bottom of the list of industrialized countries, below Latvia and Estonia, when it comes to per capita government spending. Consequently, our roads, bridges, and water systems rated a D+ from the American Society of Civil Engineers.

Nationwide, white public school districts have $25 billion more in funding than those that are overwhelmingly of color, making the dependence on local property taxes to determine the quality of our children’s education even less defensible. One example of how the education system impacts everyone is that, since 2017, the average public college tuition has nearly tripled, helping bring its counterpart, skyrocketing student debt, to a level of $1.5 trillion in 2020. And according to the author, “This represents an alarming stealth privatization of America’s public colleges.”  She goes on to reveal that millions of students are also paying double digit interest on private loans.

The author demonstrates the impact of racism on our healthcare system, “A study modeling COVID-19 transmission routes in a representative U.S. city found that the majority of the city’s infections came from situations where racism was driving higher exposures.” She goes on to say that the country’s inadequate public health capacity can be understood as a “drained pool”—antigovernment sentiment that has hobbled the public health infrastructure and “decades of cuts to public hospitals in low-income and communities of color have left half the low-income areas without a single ICU bed…”

The one thing that white supremacy does provide is “scapegoats.” She points to the function that immigrants from Latin America play in today’s “racial theater,” being blamed for the loss of jobs and the more diffuse, “way of life.” The author quotes Fox News host Laura Ingraham, who told her audience, “In some parts of the country, it doesn’t seem like the America that we know, and love doesn’t exist anymore,” and blamed that on immigrants.

The author does offer “five discoveries,” which will lead to a “solidarity dividend.” First, “refill the pool of public goods, for everyone.” Uprooting the “zero sum paradigm” by designing solutions in which one size does not fit all. And finally, to begin to establish our shared history, which has been destroyed by forces selling denial and ignorance, and whose projections have succeeded in robbing us of our own shared history.

The author ends her book with the realization that “Since this country’s founding, we have not allowed our diversity to be our superpower, and the result is that the United States is not more than the sum of its disparate parts…”  “We in ‘We the People’ is not some of us, but all of us. We are greater than, and greater for, the sum of us.”

According to the NEW YORK TIMES BESTSELLER, “One of today’s most insightful and influential thinkers offers a powerful exploration of inequality and the lesson that generations of Americans have failed to learn: Racism has a cost for everyone—not just for people of color.”
About the Author

Heather McGhee is an expert in economic and social policy. The former president of the inequality-focused think tank Demos, McGhee has drafted legislation, testified before Congress and contributed regularly to news shows, including NBC’s Meet the Press. She now chairs the board of Color of Change, the nation’s largest online racial justice organization. McGhee holds a BA in American studies from Yale University and a JD from the University of California at Berkeley School of Law.

His honors include the “Service Above Self” award from Rotary International. He’s a board member for “Partnering for Peace” and “Advance Guatemala.”   His wife and three children were born in Guatemala. You can learn more at www.MillionMileWalker.com and follow him on Facebook at https://www.facebook.com/millionmilewalker/