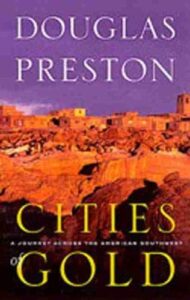 I found this book while researching plans for my first road trip in over a year due to the COVID-19 pandemic. The pandemic had changed my view on how and where to travel and I decided to focus on the history of the Native American groups in the Southwest. I knew of the author after reading an amazing story of his search of an ancient civilization in the jungles of Honduras, The Lost City of the Monkey God: A True Story. And this book was like another epic equestrian journey I’d read about recently, Tschiffely’s Ride: Ten Thousand Miles in the Saddle from Southern Cross to Pole Star, which resulted in several articles paralleling Tschiffely’s journey through Latin America with my own solo trek forty years after his.

The author organizes a small support team and several horses to embark upon a 1,000-mile trek to trace the trail blazing 1540-1541 expedition of Spanish explorer Francisco Vasquez de Coronado through some of the most desolate territory of the Southwest. And in many instances, the terrain in this “arid and remote country of mesquite, slickrock and blue sky” hasn’t changed since then.

The author immediately sets the stage for this historic encounter:

I began to wonder just what this continent was like when Europeans first arrived—that moment, 450 years ago, when the peoples of the Old World and the new World first encountered each other within the borders of what would become America. I became obsessed with that moment of contact. This was a historical event as shocking and profound as any in the human history of this planet. Unlike the normal ponderous cycles of history, it was a flash in time, a sudden, terrifying instant that left both Europeans and Native Americans forever changed. The peoples of two worlds, who had co-existed for twenty thousand or thirty thousand years, unaware of each other’s existence, were suddenly brought face-to-face. They would attempt to communicate in strange words and mute gestures, and almost immediately would begin killing one another….

The Spaniards would bring horses, cattle, and sheep into the Southwest, “three animals that would have a profound effect on the development of the region…Most significantly, they brought a new type of war to the Indians: a war fought with guns and cannons, and a war that didn’t obey the ancient rules.”

The trip would take the author and his small band across nine Indian reservations: eight Pueblo Indian reservations and the Ramah Navajo reservation for which he had to get the permission of eight governors of the eight pueblos. I was surprised to learn the scope of these territories, as only 16% of Arizona is privately owned and most was owned by the federal government (44%) and almost 30% by Indian reservations.

Reader beware— it takes over half of this 470-page book to reach the first of the cities of gold – Zuni. Fortunately, I’d hiked part of the San Pedro riverbed in the southern part of the state, which is where the author begins his quest, and I have lived in Arizona for over 25 years, so I appreciated the descriptions of the author’s visits with several ranchers after traveling over some of the most difficult, isolated areas of the state.

The author begins the chapters on the Zuni, which was the first pueblo we planned to visit during our vacation, with an overview of their cosmology:

This place, about sixty miles from Zuni Pueblo itself, marks the outer edge of the Zuni world, a place of dust, plains, wind, sky, and ghosts. It is called Koluwala: wa by the Zuni: Zuni Heaven, the city of the dead. Our trip from here to Zuni would be not only retracing Coronado, but also the mythical journey of the Zuni people during their search for the Middle Place of the World.

The Zuni were important, as they built the Seven Cities of Cibola. “Coronado was probably a two-day ride—about forty miles from Cibola when his scouts first spotted Indians. …In his later testimony before a judge on his management of the expedition, he would say that the group was seen “near a lake” and that he sent two of his captains to the Indians ‘In order to get information from them and an interpreter.’ The Spaniards gave them a cross and told them that the people of their city need not fear. And according to the author, it was unclear how much the Zuni understood, but “they caught enough to realize that this strange group of men were by no means friendly. But now was not the time to resist.”

When the author and his small band finally made it to the Seven Cities of Gold, the author “continued to sit, cross-legged, at my perch on top of the ruined city. There were no tourists, no souvenir stands, no sign of human life at all. Just a landscape of buttes and mesas, layered one against the other – sharp, clean terraces of light. Below me, in the Plain of Hawikuh, the old shepherd was driving his flock. He walked slowly with a long stick, a black-and-white dog trotting at his heels. Spirals of red dust blossomed away from the small group as it inched its way across the plain…”

The author fills in the early history of the early twentieth centuries with the sad reality that Americans oversaw the wholesale theft of Zuni lands, pushing the Zuni into poorer rangelands and blocking access to sacred sites…

The author goes on to describe the despicable treatment of the Navajos:

…Bosque Redondo was possibly the closest America has come to creating a genuine concentration camp. Most of the Indians were forced to walk, as the few army vehicles that were supplied overflowed with the aged and crippled. Those Navajo men, women and children who couldn’t keep up were left by the trail to die a lingering death – until the soldiers began to take pity on them by putting them out of their misery with a bullet…

Reflecting on the meaning of this saga, the author wonders, “…Was the death of this world worth the birth of our world? Is this fabulous America of the late twentieth century truly a better world? Is it, in the end, the world we wanted to create?” And ends with, “The great myth of the American West is that there was a winning of it.” I agree with the Los Angeles Times review, which described this story as a “fearful, fascinating tale.”

Douglas Preston is the author of thirty-six books, both fiction and nonfiction, twenty-nine of which have been New York Times bestsellers, with several reaching the number 1 position. He has worked as an editor at the American Museum of Natural History in New York and taught nonfiction writing at Princeton University. His first novel, RELIC, co-authored with Lincoln Child, was made into a movie by Paramount Pictures, which launched the famed Pendergast series of novels. His recent nonfiction book, THE MONSTER OF FLORENCE, is also in production as a film. His latest book, THE LOST CITY OF THE MONKEY GOD, tells the true story of the discovery of a prehistoric city in an unexplored valley deep in the Honduran jungle. In addition to books, Preston writes about archaeology and paleontology for the New Yorker, National Geographic, and Smithsonian. He is the recipient of numerous writing awards in the U.S. and Europe, including an honorary Doctor of Letters degree from Pomona College. He currently serves as president of the Authors Guild, the nation’s oldest and largest association of authors and journalists