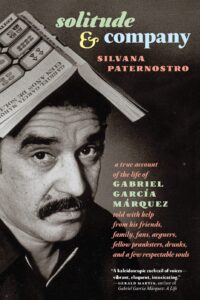 I picked up this book in search of a similar presentation of a writer’s life to a book I’m working on, The Moritz Thomsen Reader to strengthen my proposal to attract a publisher. Moritz wrote Living Poor, and my book will be an anthology of the writers who knew him best. And “Gabo” is one of the great writers of Latin America recognized with the Nobel Prize for Literature in 1982. Both irreverent and hopeful, the book recounts the life of a boy from the provinces who decided to become a writer. This is the story of how he did it.

A note in the first chapter reveals much of the author’s political persuasions in life. He reportedly changed his date of birth to coincide to the “Banana Massacre” in 1928, when the Colombian Army killed workers of the United Fruit Company who were protesting poor working conditions.  He wrote about it in his classic, One Hundred Years of Solitude, and according to the book, 3,000 workers were killed, and this account entered the annals of Colombian history in a twist of “magical realism,” for which he’s most known.

Close to fifty friends, family and writers share their stories about the author—some of which seem somewhat frivolous, but some real gems appeared, such as which writers impacted his work. Guillermo Angulo, a Colombian writer, orchid grower and a close friend of the author reveals the influence of one author from the South of the U.S., “…He sees the true Faulkner. He sees him in images. But he already knows Faulkner as a twin soul. I think he’s his most important influence from a technical point of view because afterward he invents an entire world…”

William Styron, an author from the southern U.S. who wrote Sophie’s Choice, received a Pulitzer Prize, and included both Gabo and Carlos Fuentes among his friends, went on to say,

Well, I think that’s the reason for his great admiration of Faulkner, because Faulkner, without the tag of magic realism, nonetheless visualized and created an entire world, a universe based on an actual world, which was the Mississippi he made his own and called Yoknapatawpha. Macondo is the equivalent of Yoknapatawpha. And I think that was an important contribution of Faulkner to Gabo’s own sense of literary creation.

Styron tells of an interesting conversation between Gabo and President Clinton, in which Gabo says that without Faulkner, he wouldn’t have been able to write a single word; that Faulkner was his direct inspiration as a writer when he was just beginning to pursue real world literature in Colombia. And that he had made a pilgrimage to Oxford… (Oxford, Mississippi where many of Faulkner’s stories took place).

Margarita de la Vega, a Carrageenan academic and film producer whose father was a close friend of Gabo says the following about what sets the author’s work apart from many writers. She admires One Hundred Years of Solitude because,

…it’s a vernacular, universal, and encyclopedic book all at the same time. That’s why One Hundred Years of Solitude sells so well and is read so much; because you can be a Colombian janitor…and understand it on a level different from the level of the scholar who looks up all the references and all that nonsense. He lives the story, the tragedies, the family, the evolution, the historical context, because he’s somebody who has lived it and suffered it and heard it talked about in his family. It isn’t something they read in books. It’s part of our culture

She goes on to describe where and how he developed some of the characters in One Hundred Years of Solitude, “It’s the part about being a person from Cartagena from a traditional family, insofar as the families of Cartagena were traditional, because when I look at the families of my friends and others, there was always a little bit of everything. When I saw him, I said: “No, but the character from Love in the Time of Cholera isn’t my father.” Then he said to me, “No, Florentino is my father. We won’t take that away from him. “Then he said to me, “I was interested in somehow transforming the love story of my father and mother.” (I think that’s the time when his father is sick) …. “I see my father’s influence more in the style of the novel, which is a nineteenth-century tale with lots of characters, written in the style of Balzac. It has a huge number of characters. It’s the portrait of an age. The love story is important, but it isn’t fundamental. It was his source of inspiration. He always wanted to write something new and different.” Santiago Mutis elucidates, “The Gabo of today is a Gabo who works things out. He tells his story. Which is literary. It doesn’t mean it isn’t true. It’s literary.” Mutis is a Colombian poet and godson of Garcia Marquez.

Styron describes a very important relationship of Gabo, which impacts how he sees the world. “I believe Gabo has become a very close friend of Castro’s, and I believe it’s the kind of friendship that was molded fairly early in the years of Castro’s ascent. I’m using the world “ascent” here as a climb to power in Cuba. A process that has caused such a shower of violent criticism to fall on Garcia Marquez’s head. But I think their friendship is very solid and that Gabo is determined to make the best of it.”

One of the highlights of this book is Silvana Paternostro’s ability to obtain statements and stories from close to fifty people who knew Gabo. Including Emmanuel Carballo, the Mexican editor and writer who was part of the group that embraced Gabo when he settled in Mexico City and founded a literary magazine with Carlos Fuentes; Maria Luisa Elio, also part of the intellectuals in Mexico City and a refugee from Spain, who produced a film, “On the Empty Balcony,” directed by her husband—One Hundred Years of Solitude was dedicated to her and her husband, Hector Rojas Herazo, a Colombian poet, novelist journalist, and painter who worked with Gabo at the newspaper “El Universal” in Cartagena, and Rose Styron, a poet and human rights activist from the U.S. and part of the Amnesty International board who worked with Gabo on several Latin American causes.

Among the most revealing review statements on this book:

“Solitude & Company captures Gabo—the man, the times and the places that created him. How a man from the Caribbean made a universe that the world embraced. Everyone who loves Gabriel García Márquez’s work will enjoy this wonderful book.” —Benicio Del Toro

“If I may be allowed to mix up a metaphor: This is a kaleidoscopic cocktail of voices—vibrant, eloquent, intoxicating—inspired by that endlessly fascinating literary magician, Gabriel García Márquez (a.k.a. Gabo/Gabito/etc.). And the cocktail has been mixed and shaken, expertly and knowingly, by Silvana Paternostro. ¡Salud!” —Gerald Martin, author of Gabriel García Márquez: A Life

Prize-winning journalist SILVANA PATERNOSTRO grew up in Barranquilla, Colombia, home to García Márquez’s fabled literary group, La Cueva. In 1999, she was selected by Time/CNN as one of “Fifty Latin American Leaders for the Millennium,” and is the author of In the Land of God and Man, nominated for the PEN/Martha Albrand Award, and My Colombian War.  She is a frequent contributor to English and Spanish publications including the New York Times, the Paris Review, the New York Review of Books, Vogue, and El Malpensante and Gatopardo.  She lives between New York City and Colombia.

Translator EDITH GROSSMAN is one of the most renowned Spanish-to-English translators of our time. In addition to translating seven of Gabriel García Márquez’s novels, including Love in the Time of Cholera and Memories of My Melancholy Whores, she has translated works by Miguel de Cervantes, Mario Vargas Llosa, and Ariel Dorfman, to name a few. A member of the American Academy of Arts and Sciences, she is the recipient of a Guggenheim Fellowship, a PEN Ralph Manheim Medal, an Independent Foreign Fiction Prize, and many other awards and honors. She teaches at Columbia University in New York City.