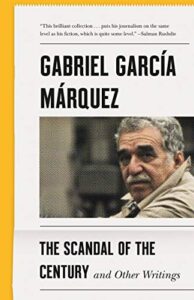 “I don’t want to be remembered for One Hundred Years of Solitude, nor for the Nobel Prize, but rather for the newspaper. I was born a journalist and today I feel more than ever that I am a reporter. It’s in my blood.” After all the accolades of his fiction writing, few appreciate how important journalism was to Marquez and overlook the importance to journalism to learning to tell a story and writing fiction.

The author’s strong political sensitivity and involvement was impacted by the political violence which interrupted his academic. In April 1948 the assassination of the charismatic politician Jorge Gaitán in Bogotá triggered a conflict known as “la Violencia,” which lasted a decade and took the lives of 200,000 people. I lived in Bogotá for several years and soon realized how this period impacted so much of what Colombia today. In the author’s case—he was forced to move to Cartagena on the Caribbean coast to study at the university and collaborate with a new local daily paper, “El Universal.”

The author was more than a novelist and was affectionately known as “Gabo” by many in the Hispanic world. His friendships included Fidel Castro, Bill Clinton, and Carlos Fuentes among others. Like many Latin American writers, Pablo Neruda, Borges and Mario Llosa, he held strong political views and causes which he wrote about and promoted.

He wrote about the early years of revolution in Latin America in a piece entitled, “I Can’t Think of Any Title,”, “…during the whole of 1958, Venezuela was the freest country in the entire world. I seemed like a real revolution: each time the government glimpsed some danger, it immediately consulted the people by direct channels, and the people took to the street against any attempt at regression…”

He admits that “Before the revolution I was never curious to see Cuba. Latin Americans of my generation imagined Havana as a scandalous brothel for gringos where pornography had reached its highest category of public spectacle…”  Until, in 1955 in Paris, he first heard the name of Fidel Castro and eventually would meet him and become a lifelong friend.

Like many of the most accomplished writers in Latin America, he declared his special affection for one city in a chapter entitled, “From Paris, with Love.”  “When I arrived in Paris, I was nothing but a raw Caribbean. I am most grateful to that city, with which I have many old grudges, and many even older loves, for having given me a new and resolute perspective on Latin America. The vision of the whole, which we didn’t have I any of our countries, because very clear here around a safe table, and one ended up realizing that, in spite of being from different countries, we were all crew members of the same boat…”

Each of the fifty short articles bring together reportages, news reports, columns, features and profiles which not only offer insights into the real world of the author used to create the worlds of his fiction, but more importantly, they reveal an essential way in which the heart, mind, and intent of this giant of twentieth century literature.

When he died in 2014, multitudes of people thronged to his funeral which was held in the spectacular palace of Bellas Artes in the capital of Mexico, where he lived for many years. He was a global citizen much beloved by Latin Americans and readers around the world.

As writer Salman Rushdie correctly put it, “This brilliant collection…puts his journalism one the same level as his fiction, which is quite some level.”

According to respected Latino reporter of “Univision,” Jorge Ramos, “This book brings us García Márquez the muckraker, well grounded in reality. In a time of ‘fake news,’ this is an indispensable book for understanding what a real reporter is.”

Márquez was born in Colombia in 1927. He was awarded the Nobel Prize in Literature in 1982. He is the author of many works of fiction and nonfiction, including One Hundred Years of Solitude, Love in the Time of Cholera, Of Love and Other Demons and The General in His Labyrinth. He died in 2014