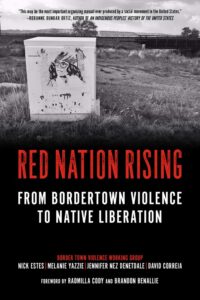 Ironically, I finished reading this book on what was called “Columbus Day,” which is not what it used to be—there’s a new story/reality in town. And this book, written by four professors at the University of New Mexico—three of the four are from Dine and Kul Wicasa tribes, provides a decidedly different perspective on our country’s relationship to, and treatment of, Indigenous communities. A decidedly Indigenous perspective. And for the first time in our history, a U.S. President officially issued a proclamation marking “Indigenous Peoples Day.”

Much of this was never taught in any of my high school history courses and it was after that when I was in college in the early ‘70s, that I came across Dee Brown’s Bury My Heart at Wounded Knee, which details the consequences of American expansionism from the point of view of Native Americans. This book is especially timely due to the growing awareness of the thousands of Indigenous women and girls who have been abused, or gone missing, and the hundreds of children found in mass graves at the boarding schools where they had been taken from their parents, as well as the growing role of Indigenous communities protesting pipelines and mining on their sacred lands as part of the response to climate change.

The four authors investigate the dynamics of border town white domination and cities that separate the territory of sovereign Native nations from the lands claimed by the United States. My wife and I recently stayed in one as part of our first vacation in a year—Gallup, New Mexico, “The Gateway to the Navajo Nation,” although it evidently has another role to play for the Navajo, according to this book.

The border towns fulfilled the role of the first U.S. military forts and trading posts, which were strategically placed along expanding frontiers to control indigenous resistance and incorporate indigenous territories to the growing “wild west.” The authors point out:

…Border town economies rely almost entirely on Native customers to turn a profit. While these businesses would collapse without Native dollars and cheap Native labor (something we’ve seen due to the COVID-19 pandemic), almost no border town businesses are owned by Native people. Why is this? Pawnshops, car dealerships, payday loan shops, trading posts, retail stores and liquor stores all rely on a business model that exploits Native people for their money, labor, talents, and culture. In other words, the political economy of border towns extracts value from Native people for the benefit of settler wealth and comfort…

Not exactly something you’d expect to find in the Gallup Chamber of Commerce brochure. They also bring a different take on the U.S. Indian education, which is summed up in its architect Captain Richard Pratt’s slogan, “Kill the Indian, and save the man.” The book recounts sections of author Tim Giago’s book on how children “suffered, endured, and died from all manner of physical, emotional, and sexual abuse in these schools. Between 1869 and the 1960s, an estimated one hundred thousand Native children were removed from their homes and placed in boarding schools operated by the federal government and churches. Of the approximately 357 boarding schools that were established after the Carlisle Industrial School, about one-third were managed by Christian denominations…”

The authors are not kind to those who want to rectify the situation and deal with “white guilt” and who reinforce the “white savior “complex in which they are unwilling to “walk their talk” by taking substantial steps to relinquish their won privilege or redistribute their wealth. “Those who conduct charity work for Native people, mainly churches and nonprofits, often fall into this category of criticism, because they see oppressed and colonized people as wretches in need of salvation…”

The book provides innumerable examples of the U.S. Government’s failure to abide by treaties and point out that the most devastating piece of legislation was the “Indian Relocation Act,” where from 1953 to 1964, one hundred Native nations were terminated, and 1.3 million acres of Native land was removed from trust status to be converted into private ownership.

Termination ended federal and treaty responsibilities, including access to education and health care, and over a thirty-year period, 750,000 Natives were relocated to cities. Consequently, the 2010 census indicates that of the 5.2 million that self-identify as American Indian (out of a total of 15 million descendants who once inhabited the land), roughly four million live off-reservations and federal trust land. The authors go on to say, “When you subjugate a people, you not only take their land and their language, their identify, and their sense of self—you also take away any notion of a future…”

This book, unlike Bury My Heart at Wounded Knee, is written by Indigenous writers/leaders and it includes a “Don’t Go Back to the Reservation: A Bordertown Manifesto” for indigenous liberation that builds on long traditions of Native resistance to border town violence:

The author of another book I need to read, Roxanne Dunbar-Ortiz’s, An Indigenous Peoples’ History of the United States, claims that, “This may be the most important organizing manual ever produced by a social movement in the United States.”

John Redhouse (Diné) provides an insightful review of the book,

“A remarkable body of work that effectively weaves long overdue native scholarship and historical analysis of settler colonialism with direct and timely frontline reports on the continuing border town wars and conflicts in occupied native territories. Offers a comprehensive framework for advancing present and future indigenous resistance and liberation struggles.”

Nick Estes (Kul Wicasa) is assistant professor of American Studies at the University of New Mexico. He organizes with the Red Nation, an indigenous-led leftist organization committed to indigenous liberation. He is also part of the collective for Abolition: A Journal of Insurgent Politics. His advocacy and research focus on indigenous resistance, anticolonialism, abolition, decolonization, and anticapitalism. He is the author of Our History Is the Future: Standing Rock versus the Dakota Access Pipeline, and the Long Tradition of Indigenous Resistance (Verso, 2019).

Melanie K. Yazzie (Diné) is an assistant professor in the Departments of Native American Studies and American Studies at the University of New Mexico. She organizes with the Red Nation, an indigenous-led leftist organization committed to indigenous liberation. She is lead editor of Decolonization: Indigeneity, Education & Society, an international journal committed to public intellectualism and social justice.

Jennifer Nez Denetdale (Diné) is a professor of American Studies at the University of New Mexico who teaches courses in critical indigenous studies, indigenous gender and sexuality, and Navajo studies. She is a strong advocate for Native peoples and serves as chair of the Navajo Nation Human Rights Commission. She is the author of Reclaiming Diné History: The Legacies of Navajo Chief Manuelito and Juanita.

David Correia is Associate Professor of American Studies at the University of New Mexico. He is the author of Properties of Violence: Law and Land Grant Struggle in Northern New Mexico (University of Georgia Press, 2013), and co-author of Police: A Field Guide (Verso, 2018).

Radmilla Cody, who co-wrote the foreword,  is a Grammy Nominee, multiple Native American Music Awards winner, 46th Miss Navajo Nation, one of NPR’s 50 great voices, a Black History Maker Honoree, and an advocate against domestic abuse and violence. Miss Cody is of the Tla’a’schi’i’ (Red Bottom People) clan and is born for the Naahilii (African-Americans).