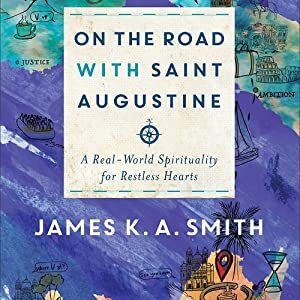 My middle daughter handed me this book and said she thought I’d appreciate it, as St. Augustine was offering the hitchhikers guide to the cosmos of wandering hearts—and she was right! The book is a travelogue of the human heart. And a road trip with a prodigal who’s already been where you think you need to go.

The book was also timely, as Augustine was a great example of the influence and power of immigrants—he was a “mestizo”—born outside of Carthage in what is today Algeria and wandering the Roman Empire in Italy, which led to what anthropologists call the “stranger value.” While insiders find it difficult seeing the world from any perspective other than their own, “the pariah has no fixed position, no territory to defend, no interest to protect. As a visitor and sojourner, as one who is always being moved on, he is much freer than the good citizen to put himself in the place of another…” according to Michael Jackson in “Existential Anthropology.”

As a travel writer’s aficionado, I was impressed how the author makes St. Augustine’s wanderings seem more tangible by comparing him to Jack Kerouac’s On the Road where the narrator, Sal Paradise, plays chronicler to the antics at the start of the story, Dean Moriarty. This contrasts with the author’s invitation to journey with an ancient African, who will surprise you by having “been there and done that.”  He’s no saint, which is why he makes salvation seem possible.

The author contrasts Sal in On the Road, who thought Dean was “the perfect guy for the road because he was born on the road.” He goes on to say, “The road is iconic because it is the symbol of liberation. From On the Road to Easy Rider to Thelma and Louise, the road is a ribbon that wends away from convention, obligation, and the oppression of domesticity. It’s hitting the road and heading west, loading up the car and leaving for college, hopping on a bus to New York City, backpacking through Europe, or hitchhiking to Memphis.”  The difference on the road between Dean and Augustine is not their experience of the road, but what they make of it.

He points out that the road, the journey, the quest not only organizes St. Augustine’s, Confessions as a dominant metaphor of Augustine’s spirituality, but in Teaching Christianity, St. Augustine’s manual for preachers, he describes a heart on the run.” As the author points out, “The heart’s hunger is infinite, which is why it will ultimately be disappointed with anything merely finite and, as Augustine points out, we experience frustration and disappointment when we try to make the road a home rather than realizing it’s leading us home. “There is a delight in the sojourn when we know where home is.”

St. Augustine’s epiphany comes from reading Paul’s epistles, “Not in riots and drunken parties, not in eroticism and indecencies, not in strife and rivalry, but put on the Lord Jesus Christ” (Rom. 13: 13-14). “…It was as if a light of relief from all anxiety flooded into my heart.” The Christian life is a pilgrimage of hope.

Augustine’s travels brought him to Milan with a common human focus, “ambition.” “I aspired to honors, money, marriage—marriage is another way to secure money—and you laughed at me. In those ambitions, I suffered the bitterest difficulties; that was by your mercy.” Augustine wasn’t unhappy because he didn’t make it, but where he “made it.” One of the things the author most loves about Augustine is his honesty about his continued struggles with ambition and the unique pride that feeds off the constant companion of even reordered aspiration in this mortal life.

St. Augustine influenced the development of Western philosophy and Western Christianity and is viewed as one of the most important Church Fathers. His most important works include The City of God, On Christian Doctrine, and Confessions. The author met St. Augustine “on the road” when he packed his wife and two children with all their belongings into a Ryder truck and headed for Villanova University to begin a Ph.D. program. He noticed the monks on campus right away, indicating that Villanova is a Catholic university, founded by the Augustinian order and named after St. Thomas of Villanova, a Spanish friar in the Order of Saint Austin. And the president of the university is an Augustinian friar.

Then there’s the complex, tragic life of playwright Oscar Wilde, who “built himself out of books.” He always came to life via books, literally seeing reality through them.” And when prison doors were closed upon him, books were the first thing he asked for.  And according to the author of the bibliography of his extensive library—the first volumes he requested in the “doldrums of Pentonville prison included Augustine’s Confessions and the City of God…. They are books he treated like compasses at various points in this life until he found one that was finally calibrated to true north.”

Sal Paradise reminds his fellow wanderers, “That last thing is what you can’t get.” Nobody can get to that last thing. We keep on living in hopes of catching it once for all.” Reflecting despair of telling oneself that “the road is life.” This contrasts with St. Augustine’s contention that, “it is God who runs down the road to meet prodigals.” “My Father’s house has many rooms” (John 14:2). There is room for you in the Father’s house.

The book ends with the reference that the Duomo in Milan is built on the site of the cathedral Augustine visited so often. And today there is a quiet section in the church with the following curious sign. Marking off an “Area Reserved to Worshipers,” which instructs: “Please, no tourists. Do not go beyond this point except for confession.”

The co-host of “The Road to Now” podcast, Bob Crawford, provides an insightful overview, “This book is James K. A. Smith’s Born to Run. It’s the story of the journey we are all on. For Smith, Saint Augustine is the perfect navigator. He’s familiar with that ‘highway jammed with broken heroes,’ because he knows what it feels like to be a heart on the run. If you lust for the highway and feel the engine idling deep inside, your ride is here. Augustine is in the passenger seat with the map of our heart unfolded on his lap, waiting to take us home.”

Trained as a philosopher with a focus on contemporary French thought, James K. A. Smith has expanded on that scholarly platform to become an engaged public intellectual and cultural critic. An award-winning author and widely traveled speaker, he has emerged as a thought leader with a unique gift of translation, building bridges between the academy, society, and the church.