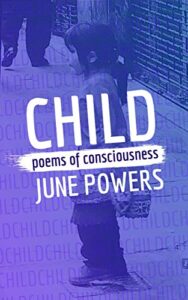 I met the author several years ago at an event of the Arizona Authors Association and ran into her again at the Phoenix Writers Club, which is when I learned about this book. After years of work with international childcare organizations, CHILD’s focus caught my attention, and the author sent me a copy. Her opening verse reflected the objective of this book of poems:

Someone needs to write about it.

Someone needs to preach about it.

Her poems successfully open the reader’s eyes to the connection and awareness of customs and conditions affecting women and children globally. The lyrics are informative while keeping their lyrical value. And one of her most enthusiastic readers provided me with some invaluable advice, “Read the poems out loud; it does bring out a new perspective.”  I also found some helpful background information at the end of the book entitled “Notes.”

Her first poem, “The Children of North Mountain,” ends with the following:

It’s never fair to the children.

The story is about children forced to abandon their homes with their parents due to disease. She’s referring to an encampment in Phoenix for TB sufferers during the 1920s and 1930s on the same land where cinnabar mines give off mercury in gas form.

Each of her poems highlights an injustice against children: unstable homes, neglect, abuse, teen pregnancy, abuse, racism, drug addiction, gangs, rape, and homelessness are among the themes she addresses.

Her poems weave a story that she wants to be told. Despite the hopelessness of the situation where children are victims with no choice, she speaks directly to them through her poems like “Brothel Daughter.” As a former CEO of a group that supports survivors of human trafficking, I found this poem especially moving:

Someone called me Flower once/so that I would not always look/ down. I carry water buckets and food/bags- I need down to keep them safe/ for the way home-it was nice/ that she said that.

This poem was inspired by the movie “Born into Brothels,” about life in the red-light district of Calcutta, India. The film won an Oscar for Best Documentary in 2005. When the movie was made, there were over 10,000 sex workers.

Since I’d traveled to Nepal, the poem “Spirt Sale” moved me as it is told in the first person of a child bride. Dalit is sold at ten years of age because it “was better for all concerned.” The poem ends with a sense of hope:

My spirit stays away, not even trying/ To sneak back and visit when I’m/ Alone except when my daughter/ Laughs and tugs my hair and I/ Swear to heaven, I will not let” Anyone trade her for cows.

“Dalit” is a Sanskrit word for oppressed, broken, or crushed. It has been used to describe the lowest castes in Nepal and India.

Another compelling poem, “Seed,” starts with a quote from Bob Marley’s “I Shot the Sherriff.”

Every time I plant a seed

He say kill them before they grow.

The author tells the reader it’s “So hard to know what to do about how to see things you never saw before” because she knows she is telling hard truths that the reader should be aware of. She uses the word “celebration” as her mandate to pass these “seeds” of reality to the world.

My celebration to share/ All the information I have—all of it/ And as many seeds, as possible.

Since poetry is far from my specialty, I reached out to several of the author’s teachers and readers more familiar with this world of verse. I met Sandra Marinella at a Phoenix Writers Club event. She’s an award-winning teacher and author, and Ms. Powers has attended her classes:

… I find her poems to be reflective and deep. I especially admire her explorative imagery… The work is haunting and beautiful.

June Powers uses her words with the precision of a surgeon and the artistry of a painter. …She lets fly her words with the intensity of Van Gogh’s brush strokes and the beauty of Monet’s gardens, often delighting us as we experience her ability to transform herself, and thereby us.

June Powers is a poet, author, and photographer who resides in Phoenix. She takes photographs, hiking, enjoys sunsets, and thinks of what to write when not writing.

His articles have been published in Ragazine and WorldView Magazines, Literary Yard, Scarlet Leaf Review, and Quail BELL. At the same time, the “Solas Literary Award recognized another with a Bronze for Best Travel Writing.” Two of his essays were winners at the Arizona Authors Association Literary Competition, and another was recently published in Eland Press’s newsletter.  He’s a contributing writer for “Revue Magazine” and the “Literary Traveler.” In the Arizona Authors Association newsletter, He has a column, “The Million Mile Walker Review: What We’re Reading and Why.”