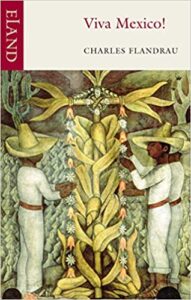 This was the third book I requested from the editor of ELAND Press for writing an article in their latest newsletter, and I wasn’t disappointed.  I can now understand why some consider it one of the best travel books.

The author was a wealthy American with a unique sense of humor and few prejudices except Western uniformity. The book is a journey among the Mexican people and starts in 1904 with a visit to his brother’s coffee plantation in Jalapa, Mexico, with his mother. His three visits were the basis for this profile of rural Mexicans and expatriate gringos, which many apply today.

The author had a life-long fascination with Mexico, “Superficially, Mexico is a prolonged romance. For even its brutal realities—of which there are many—are the realities of an intensely pictorial people among surroundings that, to Northern eyes, are never quite commonplace….” He admitted, “I have written about a very little corner of a very great place.”

He was committed to exposing the many misperceptions about Mexicans, which he describes here. “They’re the laziest people in the world, and although they seem to treat you politely, they are all treacherous and dishonest. Their politeness is merely on the surface; it doesn’t come from the heart…Mexican politeness, which – except for the fact that there is much more of it – is like our own, an outward ‘polish’ and nothing else.”

This doesn’t mean he wasn’t critical, “Mexicans are peculiarly ignorant of the principles of sanitation, and careless even when informed. Typhus, typhoid, and smallpox are prevalent in the City of Mexico all year-round, although either through indifference or a reluctance to admit it, cases are not reported in the newspapers until the frequency of funerals begins to cause a universal gloom….”

He also wrote about political life under Mexican president Porfirio Diaz in this passage about the brutal response to a local strike. The strike was at Orizaba at a jute mill which, according to the British manager, the Government sent down a regiment from Mexico City which “…in an impromptu sort of way, six hundred strikers were immediately shot, and that the next morning thirty-four were formally, elaborately, and officially executed, thus, ending the labor dispute and, according to the author,’…also ended your illusions as to the freedom of the Mexican press.”

The author also loved Mexico for tending to his solitude, as he was not a man to enter the public arena. His mother, who died on December 5th, 1911, was the only person he loved with any degree of passion,

Fellow author Nicholas Shakespeare fills out the author’s profile in the Epilogue he wrote in 1990. “Drink and solitude transformed him into a petulant, neurotic snob. ‘Mr. Lindsay,’ he told the pianist at a neighbor’s soirée, ‘if you play any more Bach, I’ll put poison in your coffee.” As for literature, his later books were, well, companionable, but unfocused, watery stuff, compared to what had gone before.”

The author’s demise came on March 28th, 1938. “I’m sorry I drank all that port wine,” he told Dr. Ogden through the oxygen tent. He spent the last years in his mother’s footsteps, traveling through Europe, to the countries where she had taken him as an eight-year-old, watching the light fade over the belfries, scribbling plots for stories that never came, and settling for half the year in the French town of Bizy, the original home of his Huguenot ancestors.

Shakespeare uses this as a precautionary tale, “…a warning of what can happen to a writer who loses his vocation, who chooses to be a spectator of humanity rather than one of its species. He had long ago forgotten Mexico and his brother’s Finca, empty except for bandits who came to sit in his chair on the windy sala, listening to phonographs.”

Geoffrey Smith of “Country Life” assessed the author as follows, “His impressions are deep, sympathetic and judicious. In addition, he is a marvelous writer with something of Mark Twain’s high spirit and Henry James’s suavity.”

Flandrau was born in 1871 in St. Paul, Minnesota. He went to Massachusetts for college, graduating from Harvard University. He was a member of The Lampoon and the Hasty Pudding Club. He taught English literature at Harvard and tutored overseas.

His books include Prejudices and Loguacites, and Sophomores Abroad. Financially independent, in 1924, he divided his time between Majorca, Spain, and his family home in St. Paul. He also lived in Paris and Normandy, France. Larry Haeg’s biographer ranks Flandrau with great writers from St. Paul, such as F. Scott Fitzgerald and Sinclair Lewis. But he notes that Flandrau seemed to pull back from the career and lived a very private life.

His book, Different Latitudes: My Life in the Peace Corps and Beyond, was recognized by the Arizona Literary Association. According to the Midwest Review, it “…is more than just another travel memoir. It is an engaged and engaging story of one man’s physical and spiritual journey of self-discovery.”

His articles have been published in Ragazine and WorldView Magazines, Literary Yard, Scarlet Leaf Review, and Quail BELL. At the same time, the Solas Literary Award recognized two essays, including a Bronze award, in this year’s “Best Travel Writing” Travel Adventure category. Two of his essays were winners at the Arizona Authors Association Literary Competition, and another was recently published in ELAND Press’s newsletter.  He’s a contributing writer for “Revue Magazine” and the “Literary Traveler.” His column, “The Million Mile Walker Review: What We’re Reading and Why,” is part of the Arizona Authors Association newsletter. He’s working on his next book, Moritz Thomsen, The Best American Writer No One’s Heard Of. He produces a documentary on indigenous rights and out-migration from Guatemala, “Trouble in the Highlands.”  His wife and three children were born in Guatemala. You can learn more at www.MillionMileWalker.com.