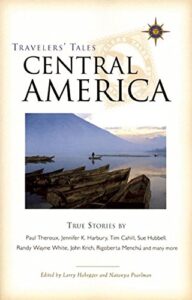 Fellow travel writer Tom Miller warned me about the book when he learned I was working on an essay about Central America, The Guatemala Reader, “Mark –Careful! You don’t want to duplicate anything from Travelers’ Tales Central America.”

When I reviewed the table of contents, I realized my book would be very different, as I’d be the author of all the stories focused on one country, while in this book, the stories cover Belize, Honduras, El Salvador, Ecuador, Costa Rica, and Panama, as well as Guatemala. Also, all the travel writers like Paul Theroux, Ronald Wright, and Tim Cahill were on top of their game.

I was pleased to note that none of the essays come from mainstream travel magazines like Conde Nast or Budget Travel. I began with Paul Theroux’s essay on traveling across Costa Rica on a train, which no longer exists. This is in keeping with his travel classic, The Old Patagonian Express…with a focus on one of his favorite themes, “Travel at its best is a solitary enterprise,” one of the fundamental precepts in one of my personal favorites, The Tao of Travel. This desire to travel alone motivated his desire to travel to the relatively uninhabited Atlantic coast of Costa Rica.

“It was mainly my other fear: the distortion of companionship. I did not want to see things with anyone else’s eyes. I knew this experience. If they point out something you have seen already, you realize that your perception was rather obvious; if they indicate something you missed, you feel cheated, and it is a greater cheat to offer it later as your own. In both cases, it is annoying. …. Oh, look, it’s raining as bad as Costa Ricans have their own unit of length—the vara.”

The book is filled with interesting drawings and quotes like this one on the unique smells in Central America, which I can attest to:

…For nearly all that there is to see can be found in the air as well, wood smoke from cooking fires, cattle pastures and fruit stands, diesel fumes of public buses, the saturated earth smells of jungle rivers. Here, the land still makes itself known.

For humor, Steve Wilson’s “Pacaya! Is the volcano crawling with bandits?” is hilarious. One sidebar tells of two young tour guides carrying Little League baseball bats, “defensive weapons” “that were supposed to protect us from the Bandidos and guerrillas.” I’m sure those hillside warriors were shaking in their munitions belts when they saw us coming—fourteen tourists being led by two five-foot-three teenagers who probably couldn’t hit a softball if my grandma pitched one right over the plate.”

One of the most informative and intriguing stories straddles Belize and Guatemala, “Exploring the Place of Fright—A local archeologist reveals secrets of the Mayan underworld,” by David Roberts. Much of Mayan history and spiritualism can only be understood deep in water-filled caves in the middle of the jungle, which created a problem, “Most archeologists lack the athleticism and the nerve to venture into even easy caves, let alone carry out extensive fieldwork within them. The dangers of caving are manifold: falling on the jagged karst, getting lost in labyrinthine passages, and drowning in flooded caves. And insidious diseases lurk in the stygian depths.”

Fortunately, the author teamed up with “Awe,” a speleoarchaeologist who is one of four cave specialists in the world of Maya studies. They learn much about the Mayas—human sacrifice, which was in vain. “The gods ignored the peoples’ petition. Something—most likely drought and famine—drove the Maya from their homeland, and the countryside reverted to jungle….”

One unlikely author of a travel journal was the Nobel Peace Prize winner Rigoberta Menchú, who wrote, “Return to Laj Chimel: a pilgrimage back to her home in the highlands of Guatemala.” She was six of nine children in a Maya Indian family from El Quiche province. She saw her village razed to the ground by the Guatemalan military, whose population reduced from 400 to 12 (over 200,000 perished, and 45,000 “disappeared” in total during a 36-year civil war).

Remarkably, she was able to put her visit and the past into perspective,

Our visit was not all sad and tearful. Once again, we were able to breathe the unforgettable small of Chimel. We remembered the games when we had been happy there. We remembered our games as children, the places where we took our sheep to graze, and the things that scared us. We imagined wonderful things for Chimel again, as well as for Laj Chimel. But first, we have to recover it and get tenure of our land again.

The tragedy and violence of the Guatemalan civil war is brought to the fore in Part Four: “In the Shadows,” a compelling story by Jennifer K. Harbury, “Everardo: During the Guatemalan civil war, a journalist meets her fate.” The story takes place in one of the highest, most isolated parts of Central America, Tajamulco, the highest volcano in Central America, the same area where I was a Peace Corps volunteer, so I knew the area well. The author is allowed to spend a month with one of the guerilla fronts, ORPA.

Her goal was to interview the Maya women to get their take on the conflict, but her life is forever changed when she meets and eventually marries Comandante Everardo,

And so it is, the first moment we meet, Everardo. You are wary, and I am confused, looking for someone utterly different. But I remember this first glimpse of you, with your fierce eyes and lithe mountain walk, as clearly as if it were yesterday. I will remember it always. There is no detail about you, no fragmentary image, that I would ever forget. These memories, at least, the years cannot take from me.

Tragically, the author only has memories of Everardo disappearing in the ongoing civil war. After much research and several hunger strikes, a U.S. Congressman revealed that he had been abducted and murdered by the CIA. One of so many such tragedies in this area.

These stories set in Central America are not for readers with short attention spans; they are an exceptionally well-crafted collection of impressions of a region of the world close geographically to the United States but a world apart culturally.

Larry Habegger has written about travel since 1980. He has visited some fifty countries and six of the seven continents. With co-author James O’Reilly, he wrote a serialized mystery novel for the San Francisco Examiner. He was a founding editor of “Travelers’ Tales” and currently serves as Executive Editor.

Natanya Pearlman first traveled to Central America on a trip to Guatemala at age seventeen. She lived four months in the mountains of Nicaragua and today is a freelance editor and writer.

Mark Walker was a Peace Corps Volunteer in Guatemala and spent over forty years helping disadvantaged people in the developing world.

He’s a contributing writer for “Revue Magazine” and the “Literary Traveler.” One of his 28 essays received a Bronze from the Solas Literary competition for Best Travel Writing, which Travelers’ Tales hosts. His column, “The Million Mile Walker Review: What We’re Reading and Why,” is part of the Arizona Authors Association newsletter. His first book is Different Latitudes: My Life of the Peace Corps and Beyond.  His latest book, My Saddest Pleasures: 50 Years on the Road, is now available on Cyberwit.net. His wife and three children were born in Guatemala. You can learn more at www.MillionMileWalker.com.