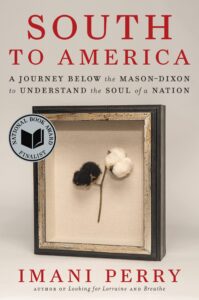 This book is one of several I’ve been reading to understand race relations in the U.S. better and make sense of the “Black Lives Matter” movement. I was brought up in Plainfield, New Jersey, where I only saw a few Black American kids in the upper tier of classes that I was in during elementary school.  Then we moved out West, and I remember turning on my television to the riots in Newark, New Jersey, which were part of the 150 riots around the country during the “Long hot summer of 1967.” Newscasts showed shattered storefronts, fires caused by arson, and National Guard members and tanks trying to restore order. And I’m thinking, “Boy, am I glad we moved West!” and “so what was that all about?”

We moved to the foothills of Colorado, where I played football for four years and never remember seeing Black Americans in our community or on the football team. Thirty years later, as a professional fundraiser, I’d travel to Brunswick, Georgia, several times a year for ten years, as it was the headquarters of the organization I worked for. I often joked that these trips to the “Golden Isles” was my “cross-cultural experience” for the year. Everything was so different, the heavy warm air, moss-covered trees, grits, fried okra, and blackened catfish, among other culinary delicacies, and the people were always friendly.

Then in 2021, the newscasts reported that three white men had tracked down a Black jogger in Brunswick in a pick-up and killed him because he looked “suspicious.” Initially, police didn’t arrest them, and the Justice Department didn’t prosecute them—only when video/cell images emerged were the local authorities forced to act. The three white men were eventually convicted of hate crimes.

I shared my surprise about this situation with the executive who hired me at the organization I worked with. He told me, “I’ll never forget the day at (the organization I worked with) when, after we instigated a plan to formally include MLK day as an official holiday…the … director of HR came barging into my office to ask me when we will be offering a day of holiday for her family members that were part of the Confederacy. That was quite a cross-cultural experience,” And once again, I’m thinking, “So where was I when all of this was going down? “

Like many, I thought I “knew” the South. I’d watched the saga of “Roots,” studied the Civil War, saw Gone with the Wind, knew about slavery and the Ku Klux Klan, and even visited a few plantations in the Brunswick area. But the author of this book, a native of Alabama and Professor of African American Studies at Princeton, returned home. Who better to explain some of the idiosyncrasies and habits in all their complexity? Most impressively, the author shows how the South is linked to the rest of the country and why one must understand some of this uniqueness to understand our nation as a whole.

Her journey is marked by nuances and surprising encounters in places and with people. She tells her stories of the South with transparency and honesty, including some troubling history and typical humiliations and joys that make Southern life what it is for a Black American woman.

My favorite stories occurred in “the Low Country,” the Sea Islands, which are close to Brunswick, Georgia. The author danced with Bessie Jones as a child, learning folk and clap songs, some of which were traced back to the Mende people of Sierra Leone, where I’d worked for three years.

She also was introduced to the Gullah Geechee culture and a story of a slave ship arriving on St. Simons Island, which was based on a group of Africans who arrived in Savannah on a slave ship called the Wanderer in 1803.  According to the author, they were brought by merchants and resold to plantations on St. Simons.  But upon transferring ships to the island, “the Ibo rebelled, drowned their captors, and grounded the ship. They disembarked singing and marching.”  Some Black folks “walked across the ocean floor back to Africa, according to this tale, and the population of St. Simons have kept the memory of the “flying Ibo” alive and created something new.”  I must say, I was unaware of, although St. Simons was my favorite of the “Golden Isles.

Many were chained and stacked and left on the island where their labor produced indigo, rice, and cotton as part of owner absenteeism, “common on Sea Islands during slavery.”

The author says she is “a descendant of the culture. That is what it means to be Black American; the hidden virtue of an unsure genealogy is a vast archive of ways being learned from birth. We dance in all of our ways when we are together….”

Robert Green wrote a revealing review of this book in The Nation magazine, “a Nation Within a Nation.”  He contends, “At the heart of Perry’s book is this basic truth. The American South is not a monolith.” He says, “While the South is often dismissed as a region playing catch-up, for better and worse, it has often been at the center of defining American democracy.”

And Imani Perry ends her book with this lyrical insight:

If America is to be salvific (of redemptive power), it can only be so because underneath our skyscrapers lie the people who have tasted the red clay, the loamy soil. Lashed, hidden, running, captured. Crucified for gain, bloodying the soil. If their dreams can become ‘we’ dreams, hope will spring. ‘Greatness’ is such an egotistical and dangerous word. But in the land of big dreams and bigger lies, we love greatness anyway. And if we want it, if we aren’t afraid to grab it, we have to look South to America.

A review in the Washington Post presents the importance of this book, “Perry has a knack for the simple observation that showcases the contradictions Americans endure or ignore.”

Imani Perry is the Hughes-Rogers Professor of African American Studies at Princeton University. Perry is the author of Looking for Lorraine: The Radiant and Radical Life of Lorraine Hansberry, winner of the 2019 Bograd-Weld Biography Prize from the Pen America Foundation. She is also the author of Breathe: A Letter to My Sons; Vexy Thing: On Gender and Liberation; and May We Forever Stand: A History of the Black National Anthem. Perry, a native of Birmingham, Alabama, who grew up in Cambridge, Massachusetts, and Chicago, lives outside Philadelphia with her two sons.

Walker is a contributing writer at The Authors Show,  Literary Traveler, Wanderlust Journal, and Revue Magazine. Different Latitudes: My Life in the Peace Corps and Beyond, a Peace Corps Writers memoir, was followed by, My Saddest Pleasures: 50 Years on the Road. Two of his 27 articles were recognized by the Solas Literary Awards for Best Travel Writing, with a Bronze for “Travel Adventure.”  His column in the Arizona Authors Association newsletter, “The Million Mile Walker Review: What We’re Reading and Why,” highlights some of his book reviews, as does the Midwest Review Bookshelf.  His wife and three children were born in Guatemala. Over 60 book reviews, photos, maps, and 27 articles can be found on his website, www.MillionMileWalker.com