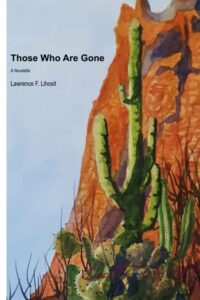 Over the years, I’ve read and reviewed several of the eighteen books of fellow author and Returned Peace Corps Volunteer “Lorenzo” Lihosit. He was a volunteer in Honduras and married a lady from Mexico, and I was a volunteer in Guatemala and married a señorita from there.  I used his Peace Corps Experience: Write & Publish Your Memoir to write my own, Different Latitudes: My Life in the Peace Corps and Beyond, proofed his Oral History from Madera, California, and agreed with the Madera Tribune, “The best of its kind in print. Like Volume 1, the author offers real-life stories by citizens of Madera, California. It seems like they speak directly to us, seated at our kitchen table, waving their arms while laughing. This is a must-read for those interested in the California Central Valley.”

So, when he told me he was writing a story about my community of Scottsdale, Arizona, I purchased a copy as soon as it appeared. Lorenzo assured me it was “a page-turner,” and he was right. He also told me, “Yesterday, I received comments from the man who was the model for Vic Chacon. He said that it was so accurate that it affected him.”

Those Who Are Gone tells the story of Jack Colter’s early school years in the 1960s when Scottsdale had 10,000 people. This modest “Novelette” is historical fiction, although the characters and scenes of his childhood adventures and mishaps with his friends came alive.

As someone who has traveled extensively and lived in different cultures, the author’s stories with a mix of Anglos, Yaqui, Papago, and Pima Indians were a surprise and a delight. And since I learned more slang than good grammar when learning Spanish in the Peace Corps, I felt at home with the jargon used by the young protagonists, “Muy Jalado,” said Wuicho, and everyone laughed.

The diversity of these schoolboys is emphasized when a teacher addresses “Chucho.” “So, you speak two languages and play an instrument.” He responds, “I speak three languages, ma’am.” “The third language is Yaqui?” Chucho nodded. “You are considered a well-educated person, Chucho. Thank you for sharing,” responded his teacher.

The book offered an appreciation of local Indigenous history. Phoenix is known for its extensive system of canals, which have local Indigenous origins, “The modern canals were begun in 1878. We believe the Hohokam began building their ancient system about 1,500 years ago….”

The tragic origins of Yaqui Indians in Scottsdale were traced back to the Mexican government, which in 1896 and 1926 “used poisonous gas dropped from planes, 12,000 troops, and artillery. Yaquis were sold as enslaved people and taken by cattle cars to work on plantations in the Yucatan.” At that time, Yaquis were welcome (to Arizona) as political refugees because of the genocide.”

Among other things, the Yaquis brought their medicinal remedies with their “curanderas.” After a hard-fought battle on the basketball court, the boys applied “sabila poultice” to their bruised legs.  This linguistic and cultural diversity wasn’t always appreciated by others, as reflected while shaking hands after winning a basketball game from a larger school and hearing such slurs as “Injun chumps” from opposing players.

The book ends with a profound observation by the narrator, Jack Colter,

Maybe my role was meant to be as a witness. To this day, every member of our Thunderbird team still has a yellowed, cut-out copy of that newspaper photo even though none of us live in South Scottsdale anymore. We’ve all become Hohokam, those who are gone.”

This is why a story of childhood schoolmates and basketball games is so fascinating and timely, as it reflects how much the community has changed over the last 68 years. The population of Scottsdale has increased from 10,000 to over 250,000 today after a steady process of gentrification. Modest homes have given way to sleek, high-rise apartments. The average home in North Scottsdale is worth approximately $5 million, making it one of the wealthiest communities in the country.

Old Town Scottsdale, “The West’s Most Western Town,” is now populated with boutiques, and a stretch of Scottsdale Road is lined with dealerships of Benzes, Beamers, and Ferraris, not to mention the occasional $500,000 Lamborghini, all of which causes one to appreciate a day when life was simpler and more inclusive.

Lawrence F. Lihosit was born in the southern suburbs of Chicago, Illinois, in 1951. His family later moved to Arizona, where he graduated from grade school, high school, and Arizona State University. He reluctantly served in the U.S. Army Reserves during the closing years of the Vietnam War and enthusiastically volunteered for the Peace Corps (Honduras, 1975-1977).

His literary work is eclectic, including poetry, short stories, travel essays, memoirs, history, and how-to. He recently published a series of art essays, accompanied by more than 150 sketches from his travels. Several of his books were nominated for Peace Corps Writers’ awards, and one was named Best Travel Book of the Year (2012). Another received a U.S. Congressional Commendation (2011). Some of his work is listed in the U.S. Library of Congress Peace Corps Bibliography, and his Peace Corps literary donations are in the John F. Kennedy Library Archives.

Although an urban planner by trade, the author has had a passionate interest in education. He taught English as a Second Language in Mexico City and back home in Phoenix, Arizona. He later volunteered as an aide in a San Francisco Bay Area grade school and high school. At 48, while working days as an urban planner, he returned to night school to earn a California Teaching Credential. For two and one-half years, he worked as a substitute teacher in grades K through 12. After retirement, he taught art as an after-school activity and volunteered at a local grade school as a teacher’s aide, helping the children of immigrants learn the 3Rs. His local school board awarded him “Volunteer of the Year” recognition in 2013 and 2017.

Mark Walker was a Peace Corps volunteer in Guatemala (1971-1973) and spent over forty years helping disadvantaged people in the developing world. His memoir, Different Latitudes: My Life in the Peace Corps and Beyond, was recognized by the Arizona Literary Association for Non-Fiction. It was followed by his second book, My Saddest Pleasures: 50 Years on the Road. More than 28 of his articles have been published, of which two were recognized as Best Travel Writing by the Solas Awards. He’s a contributing writer for The Authors Show, Revue Magazine, Wanderlust Journal, and Literary Traveler.

Some of his sixty book reviews can be found in his column in the Arizona Authors’ Association Newsletter, “The Million Mile Walker: What We’re Reading and Why,” as well as the Midwest Review Book Shelf. He founded Million Mile Walker LLC in 2016.  His honors include the “Service Above Self” award from Rotary International. His wife and three children were born in Guatemala.