On Writing: A Memoir of the Craft by Stephen King
Reviewed by Mark D. Walker 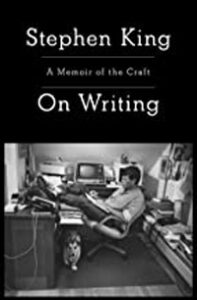 I’ve never read one of Stephen King’s books, nor do I remember seeing any of the movies based on his books, but what author can ignore a book on how to write by the critically acclaimed, million-copy bestselling writer? One piece of advice stands out, which he repeats several times and it’s worth repeating:

He goes on to say, “Yet there is a learning process going on. Every book you pick up has its own lesson or lessons, and quite often the bad books have more to teach than the good ones.”

The second foreword of his book explains why he wrote the book the way he did.

This is a short book because most books about writing are filled with bullshit. Fiction writers, present company included, don’t understand very much about what they do—nor why it works when it’s good, not why it doesn’t when it’s bad. I figured the shorter the book, the less the bullshit.

There you go—no muss or fuss….He goes on to reveal the one exception to the bullshit rule is “The Elements of Style,” by William Struck, Jr. and E. B. White. He highlights rule 17, “Omit needless words.”

The book is indeed a memoir as he takes us through the winding road of memories from his childhood, the emergence of becoming a writer, to the near fatal accident in 1999, and how he survived it and refocused on his writing. He made his first buck at an early age, “Four stories. A quarter apiece. That was the first buck I made in this business.”

In his third foreword, he gave another memorable “rule of the road” – “The editor is always right.” And the corollary, “no writer will take all of his or her editor’s advice…”

The author shares some very practical information like where to write. “I wrote my first two published novels, Carrie, and Salem’s Lot, in the laundry room of a doublewide trailer, pounding away on my wife’s portable Olivetti typewriter and balancing a child’s desk on my thighs…” He also recommends establishing a low daily writing goal of “a thousand words a day, and because I’m feeling magnanimous, I’ll also suggest that you can take one day a week off, at least to begin with…”

Other pearls of wisdom include, “It’s dialogue that gives your cast their voices, and is crucial in defining their characters—only what people do tells us more about what they’re like, and talk is sneaky: what people say often conveys their character to others in ways they—the speakers—are completely unaware.”

On rewriting, he recommends two drafts “and a polish (with the advent of word-processing technology, my polishes have become closer to a third draft).” And after the first draft he recommends taking a couple of days off, “Your mind and imagination—two things which are related, but not really the same—have to recycle themselves, at least in regard to this one particular work. My advice is that you take couple of days off—go fishing, go kayaking, do a jigsaw puzzle—and then go to work on something else…”

The author offers an edited section of one of his books as an example of his revision process. He also provides his own “Booklist,” which includes such classics as Conrad’s Heart of Darkness, Dickens’, Oliver Twist, Graham Greene’s, Our Man in Havana and Lee Harper’s, To Kill A Mockingbird, as well as three pages of other worthy candidates for a good read.

His final words will inspire you to carry on with this magical vocation.

Writing isn’t about making money, getting famous, getting dates, getting laid, or making friends. In the end, it’s about enriching the lives of those who will read your work, and enriching your own life, as well. It’s about getting up, getting well, and getting over….Writing is magic, as much the water of life as any other creative art. The water is free so drink…”