Secrets of the Moon: A Novel
by Tema Encarnacion (Dominican Republic 2000–01) 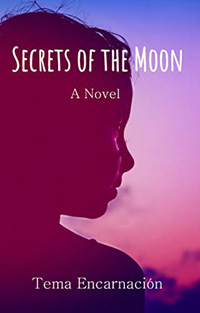 Author Tema Encarnacion couldn’t have chosen a timelier theme for her debut novel, than the circumstances that force families to flee violence from Central America and embark on a perilous journey across the border into the U.S., as the immigration crisis continues unresolved. Alternating narratives from the daughter, Luz, and her mother, Esperanza, help the reader appreciate how the experience will traumatize everyone in the family from Luz’s grandmother, who has been bringing Luz up in El Salvador alone for six years, to Luz’s crossing the border where she’s raped and mistreated upon her eventual arrival in Maryland. The rape scene of a 12-year-old while crossing the desert was especially heart wrenching, but well written, and the symbolism of the moon represented the brutalities they’d encounter throughout their journey, “I wondered what other atrocities the moon had illuminated, over the eons. What other misfortunes had it silently revealed and then hidden away, secreted forever?”

Esperanza is forced to immigrate to the U.S., as her husband is murdered (with his daughter, Luz, in his arms) in a senseless act of violence by the local gang (mara) and it takes six years before she’s able to send for her daughter.

The plot thickens and turns into a real page-turner when Luz finally reaches her mother in Maryland, and she’s overwhelmed by all that is different, and is often bullied by her classmates due to her limited English. Her own mother, Esperanza, even beats her due to a misunderstanding of why Luz was staying home from school.

Despite the challenges, Luz would go on to get her high school degree, which “represents my strength and fortitude to overcome nearly impossible circumstances.”  The “Epilogue” provides one of the most compelling scenes in the book when the narrative switches over to Luz’s daughter, Amparo, who is lauded by her first grade teacher for learning to read in two languages. “I feel very proud of myself, too.”

Secrets of the Moon is an earnest, sometimes painful, yet hopeful, tale that mirrors the experiences of countless families seeking safety from extreme violence in Central America. This novel shows what it means to sacrifice for family and future and rebuild, and will enthrall young adult and adult readers alike.

The author, who was a PCV in the Dominican Republic from 2000-2001 was very familiar with both the circumstances of immigrants fleeing from Central America, as well as how they try to adapt to a new culture in Maryland. In the Peace Corps she spearheaded projects in microenterprise and community sanitation. She made national and regional conference presentations on integrating technology and environmental literacy into English language learning through Project Based Learning. Tema has been honored as a Grosvenor Teacher Fellow by National Geographic Education for her commitment to geographic literacy through environmental advocacy. She was named as a Digital Innovator by PBS Learning Media for integrating technology into classroom instruction. Maryland Public Television has also named Tema as an American Graduate Champion.
Tema Encarnacion is an accomplished storyteller, and I can’t wait until there is a  sequel!

As a Volunteer, reviewer Mark Walker implemented fertilizer experiments in Guatemala and Honduras, after which he earned an MA in Latin American Studies from the University of Texas in Austin and spent the next 40 years with various international NGOs including CARE International, Make-A-Wish International, and as the CEO of Hagar.

His own memoir, Different Latitudes: My Life in the Peace Corps and Beyond, was ranked 39thby Amazon for “Travel, Central America and Guatemala”. His most recent article was published in the winter edition of Worldview and he’s writing a series of articles on the immigration crisis in Central America, one of which was published in the Revue Magazine. He’s a board member of Partnering for Peace. His wife and three children, plus seven grandchildren, live in Scottsdale, Arizona. He can be found at www.MillionMileWalker.com