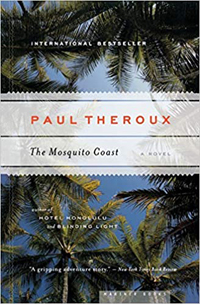 I recently came across an interview of Paul Theroux in “New York Times’” “By the Book” in which he reveals that ”The Mosquito Coast” was his favorite most personally meaningful book. He goes on to say, “…Over a period of two years, knowing it was a great idea and plot, I wrote confidently in rainy cold sedate London , and it is of course a book set in sunny warm anarchic Honduras,” at which point I realized that although I’d seen the movie, I’d never read the book! I’d read all of his non-fiction works but on “Kowloon Tong” in the fiction genre, so I finally read “The Mosquito Coast”.

I was also thinking about the relationship between the book and the movie while researching an article about Theroux’s fellow Returned Peace Corps Volunteer author and friend, Moritz Thomsen who revealed in a letter directed to fellow author Tom Miller in 1986 that Jack Nicolson had been offered the lead role of Allie Fox, “…He wanted four and a half million dollars so they got Harrison Ford. Tom, that’s what he said…” Another version of the story indicates he wouldn’t take the role since he wouldn’t be able to attend Laker home games! Either way, Harrison Ford received the role which gained him ever greater notoriety in Hollywood. Although it was one of the few movies that didn’t immediately exceed the cost, Ford claimed that part of the problem was, “that it didn’t fully enough embrace the language of the book . It may have more properly been a literary rather than a cinematic exercise.”

I found the book entertaining a gripping adventure as well as a comic portrait of cultures at cross purposes. The book is the story of Allie Fox, a tormented Yankee inventive genius like the Wright Brothers. He’s a Maine-born Harvard dropout, a self-taught engineer and inventor who rejected both God and the American way. Fox’s focus was to defend his four children from television, fast foods, drugs, crime and religious fanaticism. His interest in migrant workers his employer exploits leads to the life changing decision to pack up and take a slow boat to the jungles of Honduras, Central America.

In a breathtaking adventure story, the paranoid and brilliant inventor Allie Fox takes his family to live in the Honduran jungle, determined to build a civilization better than the one they’ve left. Fleeing from an America he sees as mired in materialism and conformity, he hopes to rediscover a purer life. But his utopian experiment takes a dark turn when his obsessions lead the family toward unimaginable danger.

But Fox’s refusal to accept any reality but his own takes darker and more dangerous forms. He imposes cruel and perilous tests and punishments upon his rebellious sons; he grows dishonest, and obsesses with the cultural collapse of America and begins to insist that in his absence America has been destroyed by nuclear holocaust, and that there may therefore be no alternative to his own version of reality.

The story is told from the perspective of an innocent fourteen-year-old Charlie Fox who refers his father but begins to doubt him and then despise him at the end when he’s put the family in grave danger. Upon their arrival in “La Ceiba” Allie buys a settlement called “Jeronimo” and they travel us the river where he inspires local Creoles and Zambus—the local indigenous group, to transform the overgrown settlement into a thriving community in the tradition of Henry Thoreau’s, “Walden Pond”. He then builds a huge ice-making machine, “Fat Boy” powered by hydrogen and ammonia and takes it up river to isolated indigenous groups only to find they’d been “corrupted” by missionaries. Upon his return three “slaves” appear to threaten Allie’s community so he tricks them into a freezer which blows up and pollutes the local river.

Escaping the explosion, although Allie is injured, he takes his family down yet another river in search of a more independent way of life from technology. After going against the flow of the river Allie concludes, “that Mosquito Coast is a dead loss…there’s death down there…Everything broken, rotten and dead is on that stream and being pulled down to the coast… I’ve been fighting the current all along”. His two sons want to return to America, but Allie tells them that it had been destroyed by a nuclear holocaust.

After passing several abandoned villages destroyed by a recent tropical story Allie finds that the missionaries he despised, the “Spellgoods” had set up a mission settlement complete with landing strip and church. Incensed by the missionary’s impact on the surroundings, Allie blows up the airplane and generator but is shot by Rev. Spellgood. The family drags Allie into a jeep and head for the coast where he dies but the family is able to reach La Ceiba and return safely to America.

After Allie’s death, his son Charlie describes his reaction,

“….Our boat was small, and it hung precariously on a line in the middle of the river—on air, it seemed. But I had never felt safer. Father was gone. How quiet it was here. Doubt, death, grief—they had passed like the shadow of bird’s wing brushing us. Now—after how long?—we had forgotten that shadow. We were free.”

In the “By the Book” interview, Theroux claimed that Allie’s character,”….was sort of homage to my father, the children the same ages and temperaments of my two boys then…” When asked in an interview for “The Atlantic” if the main character was in fact based on him he said, “Harrison Ford played Allie Fox not me. Allie is based on many people I know and even Pap, Huck Finn’s father. “

In my research on fellow author Moritz Thomsen (author of “Living Poor”), I came across a passage from Clay Morgan who was a friend of Theroux in which he says that Thomsen was in fact the inspiration for the main character. And in a letter from Tom Miller dated June 19th, 1993, to a Returned Peace Corps Volunteer author and friend of Thomsen, Page Stegner, Miller reveals, “…as Theroux quite openly acknowledges, the seeds for “Mosquito Coast” was an all-night session with Moritz talking about his unresolved feelings about his Dad…”

The author has never confirmed this connection although I’ve asked, but Thomsen was a contrarian, Returned Peace Corps Volunteer in Ecuador where he lived for over 25 years and he wrote several books loaded with examples of new technologies he introduced in the Pacific coast which failed and his attempts to establish more productive communities through the formation of cooperatives also failed. The hate relationship with his father was graphically described in his last book, “My Two Wars” so I give the claim credence although I agree with Theroux’s assertion that the main character was a compilation of various people.

Theroux’s book is excellent on so many levels and represents a serious act of imagination which just happened to form an exceptional story on which to base a movie.