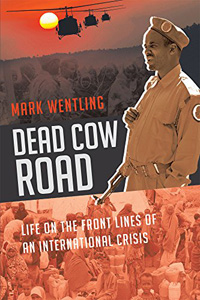 I’ve been looking forward to the author’s next book after thoroughly enjoying “Africa’s Embrace”, which is part of his African Trilogy. I resonated with the author’s story as we are both Returned Peace Corps Volunteers and pursued careers promoting overseas development. The author’s work and travels over a span of 46 years have taken him to 54 African countries. The author also worked with USAID, the U.S. Foreign Service, CARE International and World Vision, making him an ideal person to spin this tale of international intrigue and political struggles in Somalia, which was in the midst of a famine crisis.

The author’s experience and background is manifested in the protagonist Ray Read who becomes caught in a chaotic period of a desperate country—a real “failed state”, Somalia. Like a loyal member of the Foreign Service, Ray accepts a position in a country where most of the population is barely able to survive, although in the 60s and 70s some of my friends referred to places like Afghanistan and Somalia as awesome places to live, and another friend who headed up the CARE office in Somalia during the late 1980s had to work from Nairobi since it became so violent and dangerous in Mogadishu that the quality of life has been plummeting over the years.

We soon learn that Somali’s don’t have “friends” but only “interests”, which takes the fun out of the personal relationships. Ray observes the very seamy side of the local culture when Colonel Ramsey said that “Somali women pounced on the bodies of several Pakistani U.N. soldiers with their knives and cut off their testicles and stuffed them into their mouths.”

Read’s new position starts in Addis Ababa where he participates in a U.N. conference where the U.S. and Ethiopian government try to broker a peace agreement with Somali warlords. His mission becomes increasingly more complex as local warlords continues to vie for power and control over the humanitarian aid that Ray oversees. Although Ray tries to focus on programs to alleviate human suffering and save lives, he realizes that he might be being played by one of the warlords, Aidid.

His attempts to achieve a peace or help the starving seem nearly impossible due to a kaleidoscope of Catch 22 absurdities: warlords feed U.S. and U.N. rice to their goats as opposed to using it to save the lives of their fellow countrymen. The U.N. dumps expensive vehicles into the sea rather than allow Somali warlords to get them, and Ray realizes that his decisions to expand or eliminate certain programs is legitimate, as they will maybe impact the lives of local staff and their families who are on the brink of starvation themselves.

Despite the important role the NGOs Ray works with play in saving lives, their recommendations are often ignored and their importance underestimated, “There was something inherently twisted by the fact that the death of a single NGO worker was barely noticed in the news while the death of a U.S. soldier would make the news headlines for days and shake the foundation of the political powers in the United States. The absence of logic and fairness of all this deeply haunted Ray, frustrating his high sense of duty.”

The challenges of maintaining a strong personal life while working far away under such dangerous circumstances is illustrated by his unhappy marriage with a very difficult, if not psychologically imbalanced, wife who manipulates his children upon his return home by telling their son, “If that is your useless father, tell him he is not wanted here.” All of this is complicated when he gets involved with the seductive Kenyan “Njoki”, who has perfected the art of helping Ray relax and meet his every need. The fantasy ends abruptly towards the end of the novel when Ray sees her with a much younger white guy in Nairobi.

I would have appreciated additional details and insights around the best known event in recent U.S./Somali relations, “Black Hawk Down”, which motivated President Clinton to pullAmericans out of Somalia when the three helicopters are shot down and American soldiers’ bodies are dragged through the streets of Mogadishu.

The more than five hundred pages seemed a bit much, although I find myself falling into the same trap as an author by telling too much, which slows the book down and showing as opposed to telling the story. Even for someone who’s worked with many international NGOs, the innumerable acronyms like PSYOPS were cumbersome at best. The title of the book, which is based on an actual attack of a warlord’s house and a dying cow bellowing, is a compelling scene but not appreciated by the majority of readers, nor does it reflect the essence of the story. I also questioned the image of a Somali soldier on the front cover since the international NGOs seemed to be the major engine behind the humanitarian efforts, although the author informed me that the Somali military, in fact, was instrumental to saving lives.

The character of Ray Read provides an insightful analysis of the many factors impacting humanitarian efforts, which are often distorted by political realities. Of how aid programs are nothing more than band-aids over hemorrhaging problems. The author obviously knows Somalia and the culture and how clans and conflicts underlie an ongoing war and how Somalis respect power but distrust all foreigners, which is not helped by the U.S. government’s propensity to only report the good news despite the tragic circumstances.

The author sums up this fascinating but tragic tale with, “Never before had there been so much effort, expense, and sacrifice to do so little good….” As a former Returned Peace Corps Volunteer and someone who has worked for years in Africa, I found the novel credible, educational and just a very good read, making this book a valuable contribution to better appreciating the challenges of promoting peace and development in Africa.