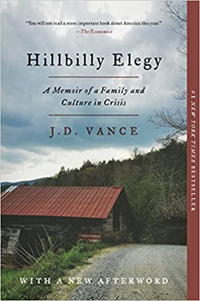 As someone with a Scottish/Irish background, I was fascinated to learn that so many of us ended up in the Appalachian area in dire poverty and how difficult it was to get out of their situation. The author movingly recounts the travails of his family, the terrible toll that alcoholism, drug abuse and an underlying code of honor took his family—neither excusing or judging their actions and decisions.

I also found the book timely after the election of Trump to better understand why so many workers no longer identified with the Democratic Party and how desperate they were to find an alternative political option. The author provides examples and quantifiable, sociological analysis on how extensive the gap between the wealthy and poor continues to grow here in the US.

This former marine and Yale Law School graduate provides a probing look at the struggles of America’s white working class through the author’s own story of growing up in a poor Rust Belt town. The moving memoir has its share of humor and introduces us to a number of vividly colorful figures. It is the story of how upward mobility really feels as well as being an urgent and troubling meditation on the loss of the American dream for an ever growing segment of our country.

I look forward to the cinematic version which will be directed by Ron Howard as this will broaden the audience for this important and timely story.