Me Talk Pretty One Day by David Sedaris
Reviewed by Mark D. Walker 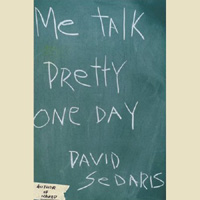 I’d heard enough about the author’s wit and humor to finally purchase one of his books. I didn’t realize it was a compilation of his short stories which was initially confusing but I found a number of them hilarious. Although he’s no Mark Twain, I found his insights and cultural euphemisms and political correctness helped lighten up my day.

I can’t imagine him trying to convince family members to share some of the more outrageous stories about them. He’s teamed up with his sister Amy on several projects. She was brilliant when in one of his stories, she imitated a family friend and propositioned their father—making Sedaris one of the kings of parental grief giving.

On the whole, the author’s childhood memories were quite entertaining although I bought the book for his cross cultural witticism and stories of how language—or a lack of understanding it can have dire and very humorous consequences.
His insights into the French was entertaining and insightful although not as well developed as Sixty Million Frenchmen Can’t be Wrong: Why We Love France but Not the French by Jean-Benoit Nadeau and Julie Bartow. But I enjoyed his quips about French language:

Nothing in France is free from sexual assignment. I was leafing through the dictionary, trying to complete a home-work assignment, when I noticed the French had prescribed genders for the various land masses and natural wonders we Americans had always thought of as sexless, Niagara Falls is feminine and, against all reason, the Grand Canyon is masculine….I wonder whose job it was to assign these sexes in the first place….

The author has become incredibly popular with seven million copies of his books in print after being translated into 25 languages. He’s been on several late night comedy shows lately and he does stand-up comedy. He’s the author of an anthology of stories, “Children Playing Before a Statue of Hercules: An Anthology of Outstanding Stories” and his essays appear regularly in Esquire and the New Yorker. He’s been at it for a while—he became the third recipient of the Thurber Prize for American humor in 2001. Sadaris and his sister Amy, have collaborated under the name “The Talent Family” and have written several plays which have been produced at Lincoln Center. He’s also been nominated for two Grammys for Best Spoken Word Album (“Dress Your Family in Corduroy & Denim”) and Best Comedy Album (“David Sedaris: Live at Carnegie Hall”).

The author is a regular contributor to The New Yorker and BBC Radio4 and he lives in England. He’s become a humorist icon in our country and this book was well worth the read.

Mark’s passion for Guatemala started as a Peace Corps volunteer, followed by a career working for 8 international organizations including MAP International, Make-A-Wish International, and as the CEO of Hagar, which works with survivors of human trafficking.

According to Midwest Review, his book, “Different Latitudes: My Life in the Peace Corps and Beyond,”  is a story of one man’s physical and spiritual journey of self-discovery through Latin American, African, European and Asian topography, cuisine, politics, and history.
His most recent article, “My Life in the Land of the Eternal Spring”, was published by Wising Up Press as part of the Crossing Class: The Invisible Wall anthology. Two articles have been published in both Revue and WorldView Magazines.

Mark is a board member of Partnering for Peace and Advance Guatemala, and was the recipient of the Service-Above Self award from Rotary International. His wife and three children were born in Guatemala.