Speak from Your Heart and Be Heard
By Dr. Kixx Goldman
Reviewed by Mark D. Walker 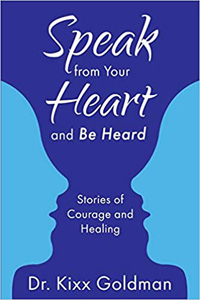 I’ve known the author for several years through our involvement with several writing groups including the Phoenix Writers Club and the Phoenix Writers Network because she’s bringing her considerable experience as a psychologist to help her readers deal with the complicated realms of truth, emotion, trauma and healing. Fortunately, she followed Tony Morrison’s challenge,”if there’s a book you really want to read but it hasn’t been written yet, then you must write it” a valuable mantra for any writer.

The author often reiterates one basic tenant which drives much of her work, “Simply put, to heal, you must speak from your heart.” As a therapist, she made every effort to give good advice and she went on to say, “I want to share the wisdom I’ve gained n my life and lifework. I hope to inspire you to find something inside that you’ve been wanting to say for years, and to say it.” A most ambitious and challenging goal indeed!

The author explores the nature of intuition and resilience and advocates that one listen to your “little voice” and speak openly about your feelings. Through this process one can claim your power ton control the mental and emotional lives. Dr. Kixx presents eight fictional stories which are drawn from her considerable life experiences.

One of my favorites was when therapist Abigail’s modern view of sexuality clashes with the conservative Catholic couples’ perceptions about marriage and intimacy. She defies the Church hierarchy in order to protect her clients and confronts her detractors in order to regain her standing as a teacher and therapist.

Abigail’s involvement in a research project I Madagascar adds additional insights as well as some humor to this story. She was studying banded mongoose who live in colonies with “a complex social structure, and we have much to learn from their behavior and mating habits.” When several of the women in the group reported rather boldly back to the group Abigail observes, “The men nodded and clapped. Some of the men look sheepish and I was reminded of the matriarchal nature of the mongoose pack. The males defer to females, perhaps because the females make the greatest genetic and parenting contribution to the group by “breeding the nearest hungry pup,” even when it’s not their own.”

The story takes a real life and rather dark turn towards the end of the story after one of the Priests overseeing the program reprimands Abigail, “What I understand is that you violated our precepts.” Abigail then reveals a far more serious issue, one of the priests from the retreat center was accused of sexually assaulting parish boys…. ”Bishop Murphy removed the priest from his teaching position. Powerful forces stepped in and prevented his name from being published. The diocese decided to give the priest another chance, but stipulated he not work with boys.”

In the end, the Priest in question took a leave of absence and the new priets informed Abigail, “We have reviewed your unblemished record and devotion to the Devine Retreat Center and intend to recommend that you retain your Most Valuable Trainer Award.” So ends a very touching, but realistic scenario in the life of a professional therapist.

All of the author’s stories tell stories of courage which leads to triumph over their challenges and they heal and grow. The stories offer the reader a guided tour of unique and powerful approaches to healing trauma. A section at the end of the book is most useful by revealing the sources of the stories, “Behind the Scenes” which I highly recommend.

The book is well written and the descriptions flow well and put you in the middle of the scene such as this description of group arriving to one of my favorite places on earth, Sedona: “…The lush landscape and rainbow rocks gave way to craggy sandstone monoliths, which emerged from the shadows and rose in rarefied shapes, as if stretching toward the brilliant sky. The stark red rocks beckoned and I could feel energy following into my body from the vortex.”

The book has received rave reviews such as the following:

In a series of skillfully constructed stories, Dr. Kixx Goldman presents us with the kinds of personal dilemmas any of us might encounter in everyday life. Should I speak out? Should I compromise my beliefs? Should I act on my convictions? Should I confront painful situations? Should I speak honestly? In these fictional settings, each character resolves their own personal dilemma through introspection, guided by a skillful therapist to Speak from Your Heart and Be Heard. Dr. Goldman’s years of experience as a psychotherapist are reflected throughout, giving the reader a rare glimpse of a successful therapeutic process. Each story is powerful in its own right. The reader cannot help but wonder about applying this simple principle of speaking from the heart to effect change in their own lives. Easy to read, this little book packs an important message. I recommend it without hesitation. It might even change your life.

Dr. Kixx Goldman is an author, psychologist and coach who loves to read and always dreamt of writing fiction. This book is her debut collection of short stories, Speak from Your Heart and be Heard: Stories of Courage and Healing.

Kixx is a graduate of the University of British Colombia and earned graduate degrees in educational and counseling psychology. She’s a member of the Arizona Psychoanalytic Society. In her private practice, she helped couples untangle fight cycles and recreate emotional intimacy. She also did individual and family work and taught workshops on personal empowerment and conflict resolution. As a consultant in the public schools, she helped students overcome learning problems and develop social skills.

Kixx has published non-fiction articles in psychology journals and feature articles in trade magazines under her given name of Audrey before she adopted the name of “Baby Kixx,” conferred by her husband. She soon shortened it to Kixx. She actively involved with several professional writing groups and is taking on a leadership role at Phoenix Writers Club.

Several of his articles have been published in Ragazine and WorldView Magazines, Literary Yard, Literary Travelers and Quail BELL, while another appeared in “Crossing Class: The Invisible Wall” anthology published by Wising Up Press. His reviews have been published by Revue Magazine, as well as Peace Corps Worldwide, and he has his own column in the “Arizona Authors Association” newsletter, “The Million Mile Walker Review: What We’re Reading and Why.” His essay, “Hugs not Walls: Returning the Children,” was a winner in the Arizona Authors Association literary competition 2020 and was reissued in “Revue Magazine.”

His honors include the “Service Above Self” award from Rotary International. He’s the membership chair for “Partnering for Peace” and a board member of “Advance Guatemala.” His wife and three children were born in Guatemala. You can learn more at http://www.MillionMileWalker.com and follow him on Facebook at https://www.facebook.com/millionmilewalker/ and http://www.Guatemalastory.net