The Line Becomes a River
By Francisco Cantu
Reviewed by Mark D. Walker 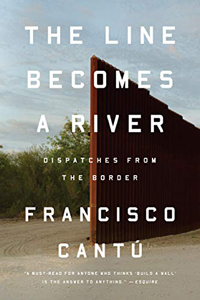 I met the author at the “NONFICTIONNOW” conference late last year where over 400 non-fiction writers, teachers, and readers from around the world gathered to explore the past, present and future of nonfiction. Cantu was the keynote speaker and was interviewed at the iconic Orpheum Theater in downtown Phoenix.

Listening to Cantú, it became obvious that the border was in the blood: his mother, a park ranger and daughter of a Mexican immigrant, raised him in the scrublands of the Southwest. Driven to understand the hard realities of the landscape he loves, Cantú joined the Border Patrol in 2008. He and his partners learned to track other humans under blistering sun and through frigid nights. They haul in the dead and deliver to detention those they find alive. Plagued by a growing awareness of his complicity in a dehumanizing enterprise, he abandoned the Patrol for civilian life. But when an immigrant friend traveled to Mexico to visit his dying mother, and did not return, Cantú discovered that the border had migrated with him, and now he must know the full extent of the violence it wreaks, on both sides of the line.

The author brings a unique perspective on the immigration crisis in this country and the failure of our government’s policies to change the increased influx of migrants, especially from the Northern Triangle. The hate, misunderstandings and trauma caused by such government policies as separating families and placing children in inadequate detention centers pale in comparison to the unstated strategy of using the Arizona desert to channel illegal immigrants to their demise. During his presentation, the author shared the Arizona Death Map, which used dots to represent 3,244 migrant deaths in the desert between Nogales and Yuma between 1999 and 2018. Some of the dots represent multiple deaths. An organization called “Humane Borders” accumulated the data to help visualize the number of people whose deaths go unknown or unappreciated. Since the most effective border control tends to focus close to border towns, this large stretch of desert covers so much space that someone must walk up to 100 miles through the desolation and brutal heat before finding a road that can take them anywhere without being detected. A sad example of how violence is normalized in our society.

One passage in his book helped me to appreciate the desperation that many Caravan members feel. This passage is from an immigrant whose attempt to cross the border failed after he witnessed several of his group left behind in the desert to die, including a small girl:

The judges in the United States, if they know the reality, they know they are sending people to their death. They are sending people to commit suicide. I will do anything to be on the other side. To be honest, I would rather be in a prison in the U.S. and see my boys once a week through the glass than to stay here and be separated from my family. At least I would be closer to them. So you see, there is nothing that can keep me from crossing. My boys are not dogs to be abandoned in the street. I will walk through the desert for five days, eight days, ten days, whatever it takes to be with them. I’ll eat grass, I’ll eat bushes, I’ll eat cactus, I’ll drink filthy cattle water, I’ll drink nothing at all. I’ll run and hide from “la migra.” I’ll pay the mafias whatever I have to. They can take my money, they can rob my family, they can lock me away, but I will keep coming back. I will keep crossing again and again until I make it, until I am together again with my family. “No, no me qudo aqui. Voy a seguir intentando pasar.”

The author worked as a Border Patrol agent until 2012. He’s a former Fulbright fellow, recipient of a Pushcart Prize, a 2017 Whiting Award, and a 2018 Art for Justice Fellowship. His writing and translations have been featured in The New York Times, Best American Essays, Harper’s, and Guernica, as well as on This American Life. His book has been on the New York Times’ “Best Sellers” list and is ranked 3rd for “immigration” by Amazon. He lives in Tucson and coordinates the Southwest Field Studies in Writing Program at the University of Arizona.

Cantu’s book is a must read for anyone who wants to learn about the underlying causes and human tragedy playing out on our border today. I totally agree with Luis Alberto Urea, the author of The Devil’s Highway, who said, “This book tells the hard poetry of the desert heart. If you think you know about immigration and the border, you will see there is much to learn. And you will be moved by its unexpected music.”